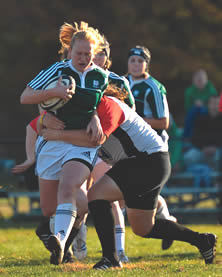 The Notre Dame women’s rugby team had just scored its first try (a 5-point play) of the season in a match against Northern Illinois University, and the players were so excited that head coach Kate Daley called from the sidelines with the typical coach’s admonition, “Girls, act like you’ve done this before!”

They actually hadn’t done it before; 2010 marked the inaugural season for Notre Dame’s newest club sport.

It may be a new club, but the team isn’t starting slowly. The Irish secured first place in their league, the Chicago Area Rugby Football Union, and entered the playoffs with a 6-0 record, with victories over the universities of DePaul, Northwestern and Chicago, among others. In November, they took second place in the Division II Midwestern Championships, qualifying for the National Championship playoffs, which will take place in April.

It has been a winding road to the top for this team, but support and interest is growing. ND women first sought recognition for a rugby club in 2008. They finally made it onto the field for an official game nearly two years later, once there were enough members to field a team. Veronica Ryan was among the first recruits at the annual Student Activities night in August 2009. Christina Konkey, then a sophomore and the club’s vice president, spotted her eyeing the poster on the rugby table and convinced her to sign up.

As a first-time player, Ryan says she wasn’t sure what she was getting into, but when practices started last spring, she found “it was a lot of fun. And that’s why I stuck around.”

Those first practices focused mostly on safety, passing and no-contact touch rugby scrimmages, since the majority of the team members had no prior experience. Of the 18 women on the team, only five had played the game before. Team captain Kayla Bishop, a senior, got her start on a rugby pitch in Ireland when she was abroad in Dublin last year. She says rugby appeals to her because she’s always loved football.

“I’m captain of the boxing team as well, so obviously I enjoyed the contact,” Bishop says. “But I just loved the idea of a team and having to rely on each other.”

In a rugby match, 15 players are on the field for each side at all times. With a roster of 18, the Irish starters sometimes lack substitutes. What they don’t lack is fan support on game days. All the home games took place on football Saturdays, so plenty of fans and family members turned out in their blue and gold to cheer on the Irish at the fields behind West Quad. Bishop attributes this quick popularity to the fact that a women’s rugby team is such a novelty.

“And we all blackmail our friends into coming,” she jokes.

But if their first season is an indicator, fans of Irish women’s rugby may have a lot to cheer about in the years to come.