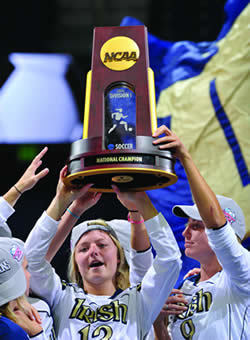 When the women’s soccer team won its third national championship in 2010, it established itself in the pantheon of Notre Dame athletics. The program, begun in 1988, took national titles in 1995 and 2004, and its current coach, Randy Waldrum, who came to Notre Dame in 1999, owns a winning percentage at Notre Dame (.860) that would place him between Rockne (.881) and Leahy (.855).

But to understand the story of last year’s championship run you have to return to the dark, painful days of October 2010, following the tragic death of student football videographer Declan Sullivan. The women’s soccer team was practicing on an adjacent field when the lift from which he was shooting toppled in high winds. Four days later the women’s soccer team was booted out of the Big East tournament by UConn, losing to a conference opponent for the first time in 78 games.

The team had already faced other challenges. Waldrum prohibits his players, even those of legal age, from drinking alcohol from August till season’s end. The 2009 team had included some backsliders, so the spring training sessions in 2010 were brutal.

“I think it’s still left a mark on me,” says three-year captain Jessica Schuveiller ’12, remembering tough days with lots of running and not much soccer. “I think it was one of the lowest points [of my career]. He took away soccer.” Players arriving for practice saw only orange cones, no balls.

“It was definitely disciplinary. Guys screwed up and broke our rules — not just the coaches’ rules,” says Erica Iantorno ’11, referring to a contract all players sign, agreeing to the team rules.

Despite the punishing spring, the code was violated again during the 2010 season, just a few days before “Senior Day,” the last regularly scheduled home game. The team came to the decision unanimously; the player, a senior, was dismissed.

The status of Courtney Barg ’12, one of the team’s stars, presented other potential troubles. The then-junior midfielder had been injured in preseason and had missed almost the entire schedule. Ready to return to play with only six games left, she faced a critical decision to come back and perhaps burn up a full year’s eligibility or sit out the remainder of the season.

Notre Dame sports psychologist Mick Franco described Barg’s decision to rejoin the team as an example of the players’ “love for one another,” but it also threatened team chemistry. Playing without Barg, the squad had climbed toward the top of the national rankings, with its only loss in overtime on the road to UCLA. “We were playing so well without her,” Waldrum recalls, knowing it would take time for Barg to return to her high level of play and wary that lineup changes could hurt the team.

The fears seemed to have been realized when, two weeks later, UConn upset Notre Dame in the Big East tourney. But — everyone associated with the team agrees — that loss began the drive to the NCAA championship. “That really snapped our heads back on,” says Iantorno.

The 15-2-2 Irish made the NCAA tournament but as a lowly fourth seed. No team seeded that low had ever won the title. Notre Dame would need to win six games, most on the road, to reach its ultimate goal.

The day after the UConn loss Waldrum called a 5 a.m. film session, and the team determined to ignore the seeding and not waste the season. Franco credits the leadership of Schuveiller and senior co-captain Lauren Fowlkes ’11 — “extraordinary people who happen to be good soccer players” — and “an incredible adherence to the hierarchy on the team.” The team was soon having the best practices of the season — intense, physical, even “fierce,” according to Iantorno.

The Irish shut out New Mexico and USC in their first tournament games before taking on archrival North Carolina, winners of 20 national championships, in Chapel Hill. The result? A dominant 4-1 victory — the most goals ever allowed at home by the Tarheels. Another road win against Oklahoma State, 2-0, sent the Irish women to the NCAA Final Four in Cary, North Carolina, in early December.

Snow flurries were swirling December 1 as the players loaded their own equipment onto a bus en route to a charter flight to North Carolina. Franco, with Waldrum’s blessing, had filled their heads with the notion that “being cool” was no longer important. The reigning philosophy was, in the psychologist’s words, “I love you, and I will do everything in my power so [you] can wear a national championship ring.”

Franco told them to prepare to take risks, a mindset that may have been crucial to the 1-0 victory over favored Ohio State December 3. Notre Dame had dominated play but the game was scoreless with about seven minutes remaining when freshman Mandy Laddish took a chance and broke down the middle, outraced Buckeye defenders and propelled a left-footed shot past the goaltender, putting the Irish in the final against top-ranked and undefeated Stanford.

Stanford’s goaltender was brilliant against a relentless attack by the Irish. But roughly halfway through the second half, another freshman hero, Adriana Leon, booted a rebound into the net, putting the Irish up 1-0. It was the one score the Irish needed as Barg’s calm demeanor and skilled passing controlled play to secure the national title for Notre Dame. 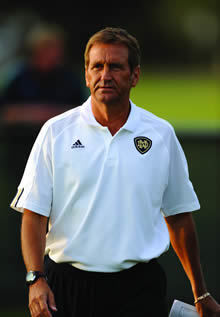 Championships always take a bit of luck, but the fact that the Irish have missed the Final Four only once in the past seven years speaks eloquently of the team’s consistent high quality. The key is the 54-year-old Waldrum, a native of Irving, Texas, who wanted nothing more in life than to coach the University of Texas Longhorns.

In 1998, while head coach of women’s soccer at Baylor, he was a finalist for an opening in Austin. But the job went to Chris Petrucelli, then the head coach at Notre Dame. A few days later a disappointed Waldrum, a 1981 graduate of Midwestern State in Wichita Falls, Texas, got a call from Notre Dame. “God watches over you in a lot of ways,” Waldrum says.

His players describe him as always professional and fiendishly knowledgeable about soccer. Schuveiller cites his endless study of the game, particularly in the European leagues. “This year he’s emphasizing the passing strategy of Barcelona,” she says.

Kerri Hanks ’08, one of four players in the history of the game to win two Hermann Trophies as top player in the nation, chafed under Waldrum’s drilling of fundamentals. Hanks is now an assistant coach at TCU and sees the world differently. "Two weeks after I started coaching I called him and said, ‘I am so sorry for anything I said.’ He does everything for a purpose.”

Hanks also raves about Waldrum’s recruiting abilities. It’s no accident that Schuveiller, Henderson, Barg and Hanks are all Texans. Hanks knew Waldrum when she was 10. Schuveiller, Henderson and Barg have known each other since they were in elementary school and played on the same club team in Dallas.

The men’s and women’s soccer teams play in the state-of-the-art, 2,500-seat Alumni Stadium behind the Joyce Center. Sadly, there are often plenty of seats available. I go because I appreciate just how good these women are at what they do.

When I visited Randy Waldrum’s modest and cluttered office in the northwest corner of the Joyce Center last spring, he said the fact that he could cross campus most days without being recognized did not concern him. The only time the program’s relative obscurity bothers him “is on game day.” But generally Waldrum is an upbeat, enthusiastic face for women’s soccer at Notre Dame, spelling it out in a distinctive Texas twang.

He talked about his decision, early in his career, to coach women. “The women are really hungry for the teaching part of it.” Having coached both men and women at the University of Tulsa early in his career, Waldrum readily makes comparisons. He found that male teammates don’t necessarily have to like each other but with women “the whole relationship part is so important,” and everyone associated with women’s soccer at Notre Dame talks about the bonding that takes place.

Freshmen are indoctrinated during the preseason summer training sessions. Players are expected to arrive in peak condition. Preseason is not for fitness, Erica Iantorno notes. For freshmen, she explains, “It’s your time to prove to us how much you want to be here,” and throughout her four years, she adds, “It’s been all about getting the ring.”

Though he’s intense about soccer, Waldrum is a relatively quiet presence on the bench during games. He rarely argues with officials and almost never yells at his players. He believes practice is the place to inject strategy. “Game day is the players’ day to perform,” he explains, though he reserves the right to make an adjustment or two.

The players get this. Up 3-1 against North Carolina last November, Waldrum called Jessica Schuveiller over to suggest a change. She replied, “Coach, we got this.” They both laughed. Two weeks later, back in Carolina, the Irish women achieved what Mick Franco calls “the sisterhood of being national champs forever.” As well as a place in Notre Dame sports lore.

Matt Storin of Camden, Maine, was an adjunct professor in American Studies at Notre Dame and served as the University’s associate vice president for news and information from 2002 to 2005, following a nearly four-decade career in journalism.