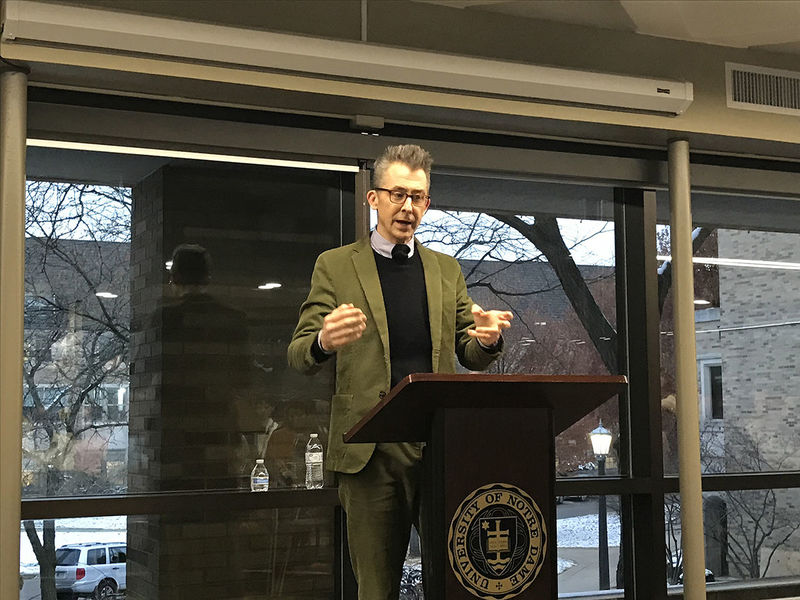 Michael Hainey knows first-hand the pressures English majors face to give up literature and embrace a more practical, career-driven calling. The ability to resist those pressures has made all the difference for Hainey ’86 in his career as a reporter, editor and author.

Discussing his work November 14 during a campus visit, Hainey offered a pep talk for pursuing the creative life rather than a staid but secure job.

“A funny thing happens when you’re an English major,” Hainey said. “You spend four years reading stories about heroes who go their own way and take on challenges. And then you graduate, and you find if you’re not careful you become everything that the heroes of your books are not supposed to.” 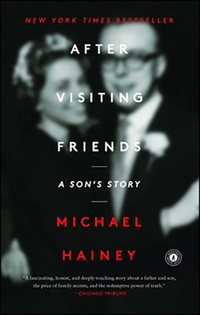 Hainey spoke to an audience of mostly undergraduate English majors during an appearance in Decio Hall hosted by the Department of English. He read selections from his 2013 memoir, After Visiting Friends: A Son’s Story. The book is a gripping recounting of his years-long search to discover the truth about his father’s mysterious death. Hainey was 6 years old when his father, a 35-year-old newspaperman at the Chicago Sun-Times, suddenly died one night on the city’s north side in 1970.

As an adult, Hainey tracked down obituaries for his father published in four Chicago newspapers. Some facts reported conflicted with what he had been told. Hainey set out to interview relatives, reluctant former co-workers of his father.

After graduating from Notre Dame, Hainey earned a master’s degree at the Medill School of Journalism at Northwestern University. He worked as a reporter at the Chicago Tribune, then as an editor and writer at Chicago Times magazine.

In 1989, Hainey took a $50-a-week internship at New York-based Spy magazine, a hip satirical publication, a gig that turned into a full-time staff writing position. He later served as deputy editor of GQ, then executive editor at Esquire. This year, he became deputy editor at Air Mail, a digital international news site with a focus on a weekend newsletter. Air Mail was launched by former Vanity Fair editor Graydon Carter, whom Hainey had worked for at Spy.

During his talk at Notre Dame, Hainey reflected on his undergraduate years. Not coming from a wealthy background, he said he was able to attend college because of a scholarship and a part-time job in the dining hall. As a senior year, while many Notre Dame classmates were accepting comfortable job offers as accountants or engineers, he wasn’t sure what he wanted to do.

“Oftentimes, it’s just listening to that voice inside you,” he said of finding the strength to pursue one’s own path.

Hainey said the talents he’s been able to apply to his magazine work and writing his memoir are based in critical thinking skills he developed as an undergraduate. He urged students to hold on to what they want to do.

He couldn’t afford to quit his job to write his book, so he did the research and interviews on his own time, and got up at 5 a.m. each day to devote two hours to his own writing before heading to work.

“It’s about holding onto not only the skills you’ve learned here,” Hainey said, “but oftentimes the inspiration you take from studying literature.”