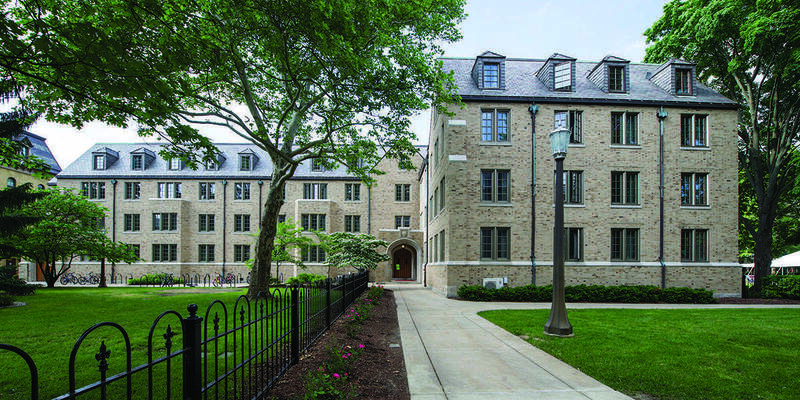 Zahm Hall as a traditional men’s residence hall is no more. Beginning in August, Zahm will serve as the “swing hall,” providing housing for students from other residence halls scheduled for yearlong major renovations.

Zahm residents were notified of the move in March.

Officials in the Division of Student Affairs made the decision based on several years of unsuccessful intervention to alter a troubling culture within the dorm, residents were told. “These concerns include significant vandalism over many years within and beyond the building (including the University’s Sculpture Park this year), demonstrated disrespect for University officials, unusually high turnover of rectors and other hall staff, and deliberate disregard for University COVID-19 testing protocols this fall,” the email read.

Efforts to address the problems included a ban from RecSports activity, the reconfiguration of common rooms, restitution from hall funds for damage residents inflicted on the building and the assignment of some of the most experienced rectors to Zahm.

“No single issue — reputational, conduct or COVID — is the reason for this change,” administrators wrote. “We also recognize not all residents have perpetuated this culture. Yet taken all together, we no longer believe Zahm is equipped to welcome new students in a manner that we can offer and is owed to every student.”

Residents were given the choice to transfer to other halls or move off campus.

Sorin Hall residents will be the first to live temporarily in Zahm, as Sorin — the oldest of the University’s residence halls still in service — is renovated and receives a three-story western addition in 2021-22. Pangborn Hall, which has been used for transitional housing in recent years, will become a men’s residence for the first time since 1992 when it reopens in August.