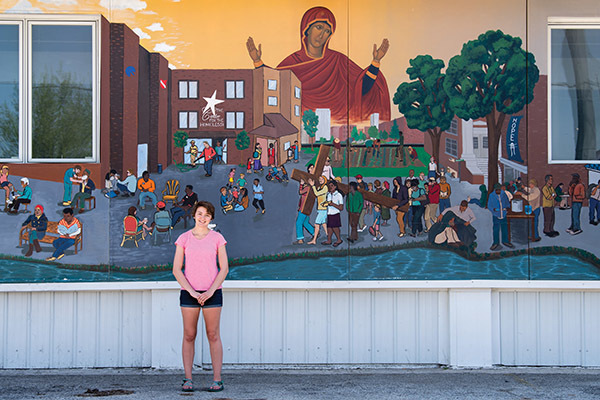 For Emily Clements ’18, reality set in one summer evening in 2017 when she heard a theology professor talking about the benefits of solar power. Our Lady of the Road didn’t need her advice. It needed cheaper electricity.

A mission supported by South Bend Catholic Worker and Notre Dame’s Center for Social Concerns, OLR is a place near downtown South Bend where street folks are welcome to take a shower, do their laundry and get a meal.

Its donations come in small denominations. Every nickel counts. Clements, who graduated in May with a chemical engineering degree, was looking for a project to satisfy the capstone requirement for her sustainability minor. Her epiphany came during one of her volunteer shifts at the shelter, when she heard Notre Dame theologian Margaret Pfeil, an OLR co-founder, musing about how solar power would nearly eliminate the shelter’s energy expenses.

That’s why Clements’ project, instead of simply being typed and double-spaced, will result in a rooftop array of solar panels.

The sustainability capstone at Notre Dame has academic and research components but is also expected to provide recommendations for solving a real-world problem. Rachel Novick, the biology professor who directs the program, says part of her challenge is to help students narrow a lofty goal — like solving world hunger — into something that might actually be achieved.

The final report needs to include an action plan that can be taken to an appropriate agency. In that way, the research and ideas don’t just sit in a professor’s file cabinet once they are submitted, Novick says.

Rarely does a student go the extra step and actually put a crew together to get the job done. “Emily’s project is unique because of the scope of change she is trying to create,” Novick says. “She’s put a tremendous amount of work into this.”

She grew up in the Cincinnati suburbs, the third child of parents who were accountants. She loved learning and sped through school, graduating from Covington Latin School at age 15.

She applied to Notre Dame as an afterthought, having found a thriving academic atmosphere while visiting a friend on campus. Her wide range of interests made it difficult to choose a major, but she settled on chemical engineering.

The typical chemical engineering student has a nose-to-the-grindstone schedule that leaves little time for anything but eating, sleeping and studying. One upside is that the doors swing open after graduation and “chegs” walk into average starting salaries north of $65,000.

That’s not what drives Clements, who says her approach to her studies and thoughts about her future began to take shape when she became involved with the Center for Social Concerns early in her student career.

“Part of it was putting an order on my priorities,” she says. “Getting good grades matters, but I think it’s more important in college to take shape as a person, to have your soul shaped as well as your mind.”

Her time away from campus proved pivotal in that personal formation. She spent a semester in Rome, around the time Pope Francis issued Laudato Si’, his encyclical on poverty and the environment. Clements and her fellow students immersed themselves in the discussions and took the pope’s vision for economic and environmental justice into their hearts.

“This earth is so precious,” she says. “I knew before that it was important, but I didn’t see it as a moral obligation to take care of it for future generations.”

She sees people as a sacred, endangered resource as well. When she began spending time at Our Lady of the Road, she expected that she would be offering advice and solace to the poor souls gathered there. Instead, she spent most of her time listening and learning. She gained respect for shelter visitors and the way they interact, coming to rely on them for direction. “I’ve become impressed by how important random strangers can be,” she says. “They explain things, what you need to do and how you need to do it.” 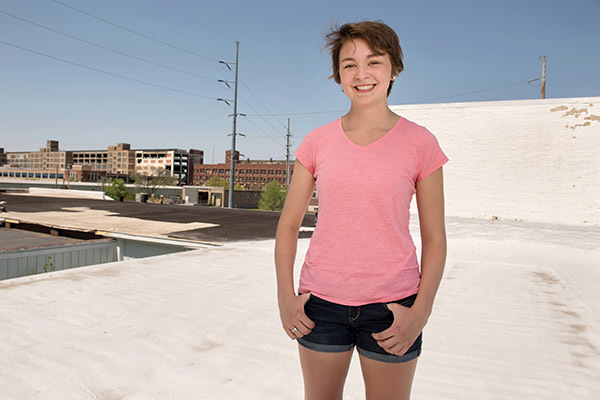 She served one summer at OLR as a full-time volunteer and soon fell in love with South Bend, a city Notre Dame students typically do not explore beyond the bars and restaurants. It was during one of those summer nights that Pfeil floated her wish for solar panels.

The idea percolated with Clements: A properly installed solar array, she determined, could virtually eliminate power expenses at OLR, an 11,000-square-foot facility where electricity bills range from $500 per month in the summer to $1,200 in the winter.

When Clements returned to campus last fall, she began harnessing the resources she would need for the project. She made one crucial connection with Bill Jordan ’85 and Nancy Brennan-Jordan ’85, co-creators of the Let’s Share the Sun Foundation, which brings solar power to schools, orphanages, clinics and church buildings in Haiti.

She forged another key relationship with Inovateus Solar, a South Bend-based energy equipment supplier, and drummed up volunteers from Notre Dame and South Bend to get engineering, architectural and installation help, paring the project’s costs down to a manageable $30,000.

She hoped that Notre Dame, with its millions in fundraising dollars, would kick in that amount. When she was turned down, forcing her to seek online donations and other sources of support, she considered it a blessing in disguise.

“If the University would have given me the $30,000, then more people wouldn’t have a chance to be involved,” she says. “It’s now more of a communal project, which is a good thing.”

In its 12 years, OLR has evolved by reacting to its visitors’ needs and interests. Guests may learn skills such as drawing, carpentry, orchard care and beekeeping. When the solar array is ready, they’ll learn how to install it.

For Pfeil and OLR, the solar project saves money but also will be a source of inspiration. “We will be able to see the solar array from the chapel, a constant reminder of the sacramentality and interconnection of God’s creation,” Pfeil says.

Clements stayed in South Bend after graduation in May to oversee the installation this summer. After that, she realizes, she must face her own future.

“I don’t have my life mapped out,” she says. “There is a sense of tension. All my Notre Dame friends are getting jobs and they’re going to be successful in the traditional sense of the word.”

If she commits to a more traditional career, she says, it will be one that dovetails with her commitment to the ideals that burrowed into her soul after reading Pope Francis’ encyclicals.

Great challenges lie ahead in the sustainability industry. Clements can see herself working on battery storage, for example — an unresolved issue in renewable power generation.

“I enjoy solving problems,” she says. “There are so many ways to do good work. I just have to find the way that will be ready for me.”