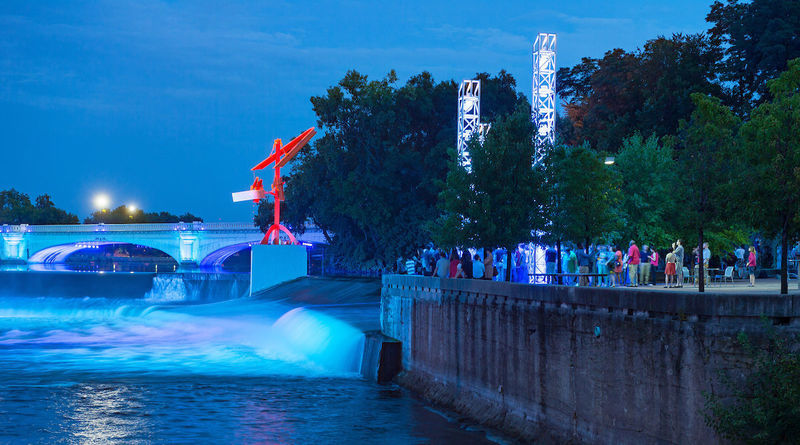 The St. Joseph River glows like a string of multicolored jewels as it spills over the dam near Century Center in downtown South Bend.

The colors dance across the water, blue to green and red to purple, forever shifting and changing. They light up the underside of the Jefferson Boulevard Bridge, as well as the dam and light pillars on each side of the river, and highlight “The Keepers of the Fire,” a Mark di Suvero abstract sculpture poised on a small island since 1980.

South Bend’s first dam was built on this spot in the early 1840s, around the time a young French immigrant priest named Rev. Edward Sorin, CSC, was founding a new school north of this fledgling frontier settlement.

Standing on land reclaimed from South Bend’s industrial past and designed by Bloomington, Indiana-based artist Rob Shakespeare, “South Bend River Lights” is an interactive LED-light sculpture and a permanent addition to the city’s downtown.

Area residents welcomed “River Lights” and marked the 150th birthday of South Bend’s charter as a city in May 2015 with a three-day celebration along the St. Joe. The sculpture drew applause and cheers of appreciation from the crowd of thousands that gathered downtown on a Friday night for the artwork’s first public lighting.

In its five years of existence, “River Lights” has become a city landmark. It’s a regular draw for local residents and visitors from out of town. In the evening and in all seasons, people turn out to gaze on the water and the ever-changing lights.

Motion sensors are built into the light pillars. Some visitors discover this by chance, realizing as they move among the sensors that the lights change color or alter their pattern in response. Children especially view this with delight, waving their arms to change the lights, seemingly like magic. Visitors can launch a ripple of changing, colored lights across the river, and people on the other side can send it back.

Part of the sculpture — the “light forest” of five interactive towers on the river’s east side — went into temporary storage last year when Notre Dame and the city broke ground on a 2.5-megawatt hydroelectric generation facility on the downtown dam. The plant, which will be mostly underground, is expected to generate about 7 percent of the University’s electrical needs and offset nearly 9,700 tons of carbon dioxide annually. The towers will return when the hydroelectric project is finished and running, expected by fall 2021.

“River Lights” can be programmed to change colors in time to the beat of music during outdoor concerts. And sometimes it’s set with specific colors to mark holidays or special events — red, white and blue on the Fourth of July or green for a major Fighting Irish football victory, for example.

Farther north along the river in Leeper Park, a long-lost landmark of water and light was reborn last year. It’s the Studebaker Electric Fountain, originally dedicated in a ceremony that drew thousands to Howard Park in 1906, and long thought to have been scrapped.

The ornate Edwardian fountain was given to the city by John M. Studebaker, a co-founder and president of the Studebaker Automobile Company. It was powered by electricity and lit by colored incandescent lamps, both novelties in city parks of that era. Expected to last for generations, it started to deteriorate within a couple decades. The crumbling fountain was removed from Howard Park in 1941, when the city didn’t have the funds to repair it.

As it turns out, the top two-thirds of the fountain found its way several miles upriver to a family’s backyard in suburban Osceola, Indiana, and stayed there for nearly 50 years. The classical female figures, cherubs and dolphins were painted gaudy colors, which helped to protect them from the elements. The fountain’s fragile remains were donated to The History Museum in South Bend in 2009.

Community volunteers formed a plan to restore the Studebaker Fountain as a public landmark. In less than eight months, they raised nearly $650,000 in private contributions for the project.

The remaining original zinc figures were restored. And the fountain’s missing pieces were fashioned in aluminum by Robinson Iron Corp. of Alabama, which owns the vintage casts from J.L. Mott Iron Works, the long-defunct firm that made the original fountain.

The elaborate fountain is about 28 feet tall, with a pool nearly 42 feet in diameter. Its new home is in Leeper Park, the city’s pastoral strolling grounds now that Howard Park has been upgraded into an active, athletic attraction featuring an ice skating trail and large playground.

The reborn Studebaker Electric Fountain debuted last August to “ohs” and “ahs” from an appreciative public. Like “River Lights,” the fountain features changing, colored LED lights that may be programmed to music or for special occasions.

“South Bend River Lights” and the reborn Studebaker Electric Fountain both stand along the St. Joseph River, not far from its southernmost curve that gave the city its name. As a pair, the two landmarks offer an appropriate nod to South Bend’s industrial past and a promise to its future.