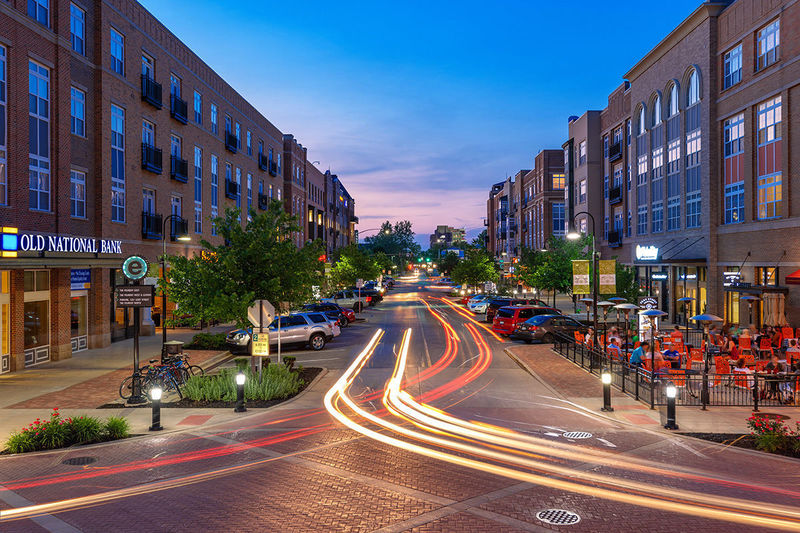 Newsweek hadn’t named South Bend one of its dying American cities just yet, but the groundwork for that melancholic moniker had been laid.

By the end of that academic year, though, a ray of hope had emerged.

Kite Realty Group broke ground on Eddy Street Commons on land owned by the University. The development promised to bring luxury housing and acres of retail and dining to the disused plot and, with it, to breathe some life into a city that needed it, bad.

The problem was the location. Given its proximity to the Golden Dome, the project lay mere feet outside the Notre Dame zip code and firmly within the Notre Dame orbit. South Bend needed developments like this, people said, but this one seemed more like a campus amenity than a boon for the city at large.

Could a city start its renaissance from a borderland?

A dozen-odd years later, it seems the answer is yes.

“There were some at the time, because we were in decline, thinking that this was a zero-sum game,” says South Bend Mayor James Mueller ’04 of the days before the Commons project took off. People feared that “investment in one area would mean a lack of investment in another.”

Over time, though, that fear has proven unfounded. Marco Mariani was the executive director of the booster organization Downtown South Bend when Eddy Street Commons broke ground, and he remembers telling business owners to think in the long term.

“The position that we took was, ‘This is going to be an economic draw for downtown, for the region — trust us,’” he says. His team felt that Eddy Street’s high-end brands — Urban Outfitters, elevated fast food like Chipotle, and an Aveda salon have long anchored it — would convince not just Notre Dame students but locals and even newcomers to see the city as a hip place to be.

They predicted that such renewed goodwill would inevitably move downtown. And after Pete Buttigieg became mayor in 2012, it did.

Unlike the Commons project, downtown South Bend didn’t need to be built up from scratch. It had a flagship hotel in the DoubleTree and an established conference venue in Century Center. It had museums, bars, restaurants, a few stores; it had just never evolved into a destination.

Buttigieg promised to change that. With new development thriving along Eddy Street, he proposed even more in the city’s center, including an arts district along the river as a key plank of his 2011 campaign platform.

After his election, businesses flooded into the area. Café Navarre, opened by South Bend-born restaurateur Kurt Janowsky in 2012, would earn a nod from Midwest Living magazine as one of the best new restaurants in the Midwest. Rental housing transformed historic but underused buildings like the LaSalle Hotel into chic apartments for retirees and young professionals. And developers like Dave Matthews demonstrated that new residential construction in the heart of the city was both possible and profitable.

By 2015, the “South Bend River Lights” art installation had people flocking in from around the region to watch a nightly light show, and visitors and locals alike were posing for pictures with a crop of Instagram-ready sculptures reading “I♥SB.”

Later that year, Buttigieg won his second term and launched a program called Smart Streets, aimed at transforming Main Street and Michigan Street into two-way roads with lower speed limits and better pedestrian access. Some locals balked, but from a community development standpoint,
the project accomplished exactly what Buttigieg had hoped. More than $90 million worth of new businesses have moved into downtown since Smart Streets began, and many have cited the slowed-down, pedestrian-friendly streetscape as a factor in their decision.

The current occupant of the mayor’s office, James Mueller, grew up in South Bend and, like his predecessor and St. Joseph High School classmate, spent some time away from home before returning.

“It was exciting to see from afar, when I’d come back and visit my family and friends — to see the progress being made,” he says. “And since being back in 2015, we’ve taken it to the next level.”

Mueller ’04 attributes much of South Bend’s recent progress, economic, cultural and reputational, to the developments at Eddy Street Commons and downtown. But the impacts of those districts, he says, are felt far beyond their borders — which he and others say is key to the next phase of the city’s transformation.

When I moved to South Bend in 2017, I was exactly the kind of young professional that Mueller, Buttigieg and their ilk had sought to attract.

I moved into an apartment at Studebaker Lofts, a development that had transformed the partly empty JMS Building into a property filled with energetic retirees and young couples with babies and dogs. I took yoga classes on the green at the former College Football Hall of Fame, sipped cocktails at the whiskey bar down the street and took visiting friends on tours of the half-dozen hip eateries within walking distance of my place.

I took advantage of all that my new neighborhood had to offer, and, on my drives to and from work, I availed myself of Eddy Street’s offerings, too. The Aveda salon became my hairstyling go-to, the Pure Barre studio my favorite gym. I loved the city I discovered, but I did notice a problem.

I knew South Bend in college as a place of $3 beers and $100,000 homes. Though my 500-square-foot loft was on the cheaper end of the luxury apartment stock, the cost of my yuppie lifestyle at times seemed more aligned with a major city than one famously known as the fourth-largest in Indiana. A coolness renaissance had come to South Bend, but could the average person in South Bend afford it?

According to Marco Mariani, the answer is “kind of.”

Mariani moved on from his DTSB post in 2010, taking the title he holds now as executive director of the South Bend Heritage Foundation. He marvels at the progress the city has made in the past decade but acknowledges that the rising tide has begun to leave some people struggling to stay afloat.

“The biggest challenge now is, we are pricing people out,” he says. “The market has swung so far in the opposite direction that it’s creating an environment that is difficult for anyone to get into.”

A quick look at the realty website Zillow confirms his claim. Even as the coronavirus pandemic sent the economy into a tailspin, a search of the site this spring revealed a few dozen homes for sale at a price of $500,000 and above — not in Granger or Mishawaka but within the city of South Bend.

Mariani rejects the idea that downtown and Eddy Street have gentrified. As he points out, that would require displacement of poor residents, which hasn’t happened. These areas previously had little housing stock of any price. But they have excluded families who can neither afford the market rate nor snag the affordable-housing units that South Bend Heritage and others have worked to include in new construction.

Many parts of town, particularly on the south and west sides, remain affordable. They may not yet see the shiny new businesses that Eddy Street and the downtown core have gotten, but Mueller and Mariani both insist that revitalization is coming. In fact, they say, it’s key to expanding the resurgence of South Bend from a Notre Dame-adjacent condo boom to a transformation that touches all corners of town.

In the meantime, they urge people not to downplay the changes already made.

“We started out the last decade being named on a list you don’t want to be [on]: one of America’s dying cities,” Mueller says. “And over the course of the past decade, we’ve been able to turn that narrative around.”

South Bend is a city on the rise, he says — and the young people choosing to start their lives in downtown apartments and Eddy Street town houses are not just a side effect of the change but a driver that builds economic prosperity for the community as a whole.

“We still have a long way to go,” Mariani says, “but just the fact that we’re having these kinds of conversations . . . for me it’s just a head-shaker, because I never thought we’d be doing these kinds of things.

So travel back again to the present. In 2020 — or at least the parts of it where social distancing didn’t rule daily life — the plot of land across from Notre Dame’s southern edge buzzes with diners and shoppers and, thanks to the new phase of the Eddy Street Commons development, construction crews building the city’s latest homes. Downtown, locals and visitors stroll past public art and park their bicycles outside boutique barbershops and buzzy cafes. Notre Dame football has turned around, too — though that last part may be a coincidence.

South Bend is cool. And the dark ages? Gone.

Sarah Cahalan, a former associate editor of this magazine, is now studying at the Medill School of Journalism at Northwestern University.