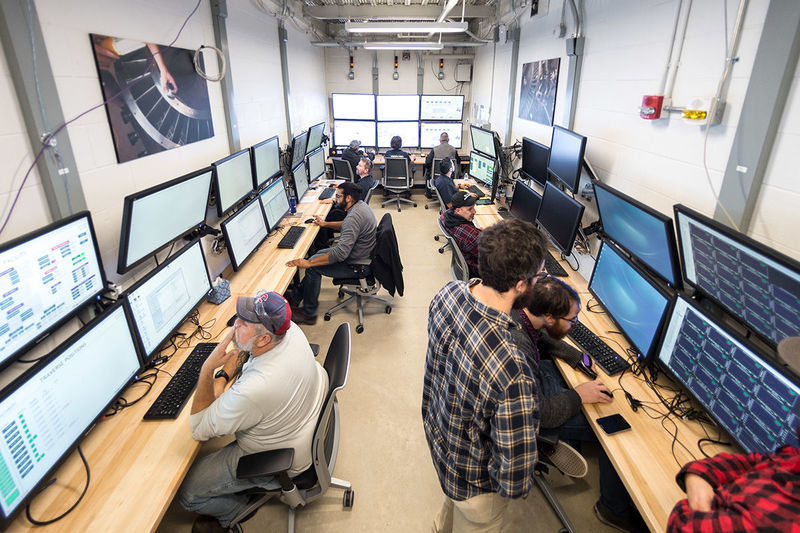 When South Bend area health care providers needed face shields for use in the treatment of coronavirus patients, Matt Leevy, director of the Innovation Lab at Notre Dame’s Idea Center, took action. An associate research professor in the Department of Biological Sciences, Leevy researched face shields and consulted with doctors to produce several prototypes using advanced 3D printers in his lab. He then enlisted the help of campus and community partners such as Purdue University Polytechnic Institute South Bend and 3D printers from the MakerHive in Elkhart, Indiana, to print more than 5,000 shields within weeks.

He could have fabricated the shields alone. But the collaboration enabled him to deliver a better product in a shorter period of time — and build valuable relationships in the process.

“This is a sneak peek into the future,” Leevy says. “We’re working with the community, trying to prototype things very quickly and then hand those off to other advanced shops on campus for manufacturing. And as we level up our manufacturing capabilities on campus, you can imagine these types of interactions leveling up as well.”

That’s the idea behind the LIFT Network, a collaboration between business, academia and community stakeholders to accelerate industrial innovation and spur economic and workforce development in the South Bend-Elkhart region. Leading partners include Notre Dame and other colleges and universities, the South Bend-Elkhart Regional Partnership and the Community Foundations of Elkhart, Marshall and St. Joseph counties, working together with the help of a $42.4 million Lilly Endowment Grant.

LIFT stands for Labs for Industry Futures and Transformation. So, what is the LIFT Network?

It helps, probably, to explain what it is not. It is not a single building or office; it isn’t a physical space at all. Notre Dame is involved, but it is not a Notre Dame project — at least not in the sense of ownership or sole leadership. Nor is it the formalization of an existing structure, though Notre Dame has collaborated informally with local industry for decades.

In essence, the network is a group of stakeholders organized around a common goal: to prepare a more productive, resilient and talent-driven region to compete in the digital economy, particularly in advanced manufacturing — the use of innovative technology to improve products or processes.

What that looks like in practice depends on several factors, which now include the effects of the coronavirus. But the face-shield project offers an example: Health care providers identified a problem; Notre Dame found a solution; network partners acted to implement it.

Gary Neidig, president of Indiana Technology and Manufacturing Companies (ITAMCO) offers another example: a physics-based software for 3D metal printing developed in part by a Notre Dame engineering professor. ITAMCO licensed the software to launch a new company that has since been acquired by Siemens.

“Everyone came out with more money than they started with, which was a good thing,” Neidig says. Building on that experience, ITAMCO connected with Notre Dame’s Center for Research Computing on another project that received early-stage funding and guidance from the Idea Center.

“We’re not planning on stopping there,” Neidig says. He sees the LIFT network as an extension of the Idea Center, which operates as a general resource for research commercialization and related entrepreneurial activities on and around campus.

“It makes sense,” he says. “I think it will help industry in the region.”

Still in its infancy, the LIFT Network is premised on the understanding that its partners are links in the same economic chain, one only as strong and successful as the others.

“There’s a recognition that we can’t necessarily be the university that we aspire to be unless the region is really hitting its potential,” says Scott Ford ’01, ’09 M.Arch, Notre Dame’s associate vice president for economic development. He notes that the midsize metropolitan regions in the United States that have shown the most consistent growth over the past two decades “are those that have a Tier 1 research university” — like Notre Dame — “integrated with industry.”

To that end, the LIFT Network includes iNDustry Labs, which offers local manufacturers access to the University’s cutting-edge research and development expertise, laboratories and equipment as a means of helping them compete in the global marketplace.

That includes access to Notre Dame’s “global network,” Ford says, including its alumni base. Use of such resources will be highly subsidized to begin with, he says, and move toward a sustainable fee-for-service model over time. “So many businesses are not of the scale to have an innovation team or department,” he explains.

In a broad sense, the network operates like a sharing economy applied to business. I have something you need. You have something I need. My success depends on yours. Let’s work together.

Notre Dame’s assets include opportunities to work with advanced students on capstone projects that might involve IT services, data analytics, computer simulations, robotics and more.

A business might turn to iNDustry labs for R&D assistance with a new product, then take advantage of LIFT Network resources to make it — resources that, in many cases, would be too expensive for a small business to buy and maintain on its own.

Let’s say the product incorporates some form of basic research from Notre Dame. Commercialization has become an area of intense focus for the University — since 2006, total internal and external investment in bringing research to market has grown more than 150 percent.

At Notre Dame, prototyping, an important phase of that process, takes place at Matt Leevy’s Innovation Lab. “We joke that we make everything from coasters to medical equipment,” he says. “We take it all, we make it all.”

In many ways the LIFT Network is the culmination of years of effort to boost regional economic development, an essential step in the University’s ongoing bid to recruit and support top-notch students, faculty and staff and combat “brain drain” in the region — the outflow of talent to more prosperous areas of the country.

Before LIFT, Notre Dame focused on targeted partnerships for its commercialization and economic development efforts. Success stories include the Notre Dame Turbomachinery Laboratory, created in 2016 at South Bend’s Ignition Park as a gas turbine R&D facility for major manufacturers; Aunalytics, a data storage and analytics company; and EmNet, recently acquired by Xylem, whose sensor-driven “smart sewers” proved themselves in South Bend and are now being installed in cities around the world. Such endeavors have created hundreds of high-paying jobs and strengthened the local tax base while advancing Notre Dame research and other interests.

What makes the LIFT Network new is the mechanism for ongoing, multilateral collaboration. The concept amplifies the function of one of its members, the South Bend-Elkhart Regional Partnership. A nonprofit regional development authority established to compete with other regions in the state for millions in state economic development dollars, the partnership represented the first real effort to tackle community and economic development as a collective, rather than as competing businesses and public and private organizations.

With input from Notre Dame, the partnership recently secured more than $40 million for parks and trails improvements, mixed-use development and a new aquatics center, all aimed at improving quality of life and attracting and retaining professional talent.

John DeSalle embodies the spirit of connectedness animating the LIFT Network. The former president of Hoosier Racing Tire, based in Lakeville, Indiana, DeSalle is the first executive-­engineer-in-residence at iNDustry Labs, a position created to bring real-world experience to the enterprise and support the broader network.

“I was an engineer throughout my career, but I was also involved in marketing and finance,” DeSalle says. “So I understand the entire enterprise from A to Z.”

Before the coronavirus hit, DeSalle was working with companies to solve problems related to R&D, recruitment, supply-chain management and other issues as part of the LIFT/iNDustry pilot phase. Those efforts are currently on hold, but he’s not giving up.

DeSalle first got involved in regional economic development about a decade ago. At the time, he says, he was having trouble recruiting skilled workers. Many felt the area lacked, among other things, compelling employment opportunities for trailing partners or spouses.

“I would come home and complain about all the challenges I had, and my wife very deliberately told me one day, ‘John, either get involved and do something about it or stop complaining,’” he recalls.

Since joining iNDustry Labs, DeSalle’s been amazed at the amount and quality of everything the University makes available — particularly its core research facilities, which house state-of-the-art manufacturing equipment like laser cutters that are too expensive for most businesses to own and operate. DeSalle says such resources will be especially valuable as companies try to bounce back from COVID-19 and the world’s worst economic crisis since the Great Depression.

The face-shields project demonstrated the network’s ability to quickly respond to evolving demands. At the same time, the University and its partners have been helping existing companies pivot to meet the need for equipment and supplies related to the pandemic. But that’s just part of the equation.

“This is not a tech push,” Scott Ford says. “We know to be successful we have to solve problems, but we also have to earn trust,” especially “in a region where so many companies don’t have a preexisting relationship with Notre Dame, and might be skeptical of academic institutions providing support to industry, especially around manufacturing.”

Quick wins are important, and Gary Neidig of ITAMCO is hopeful. While obstacles remain, he says, “there is more openness and ability for people to interact [with the University] now than at any point in the history of the region.”

Erin Blasko is an assistant director of media relations at Notre Dame.