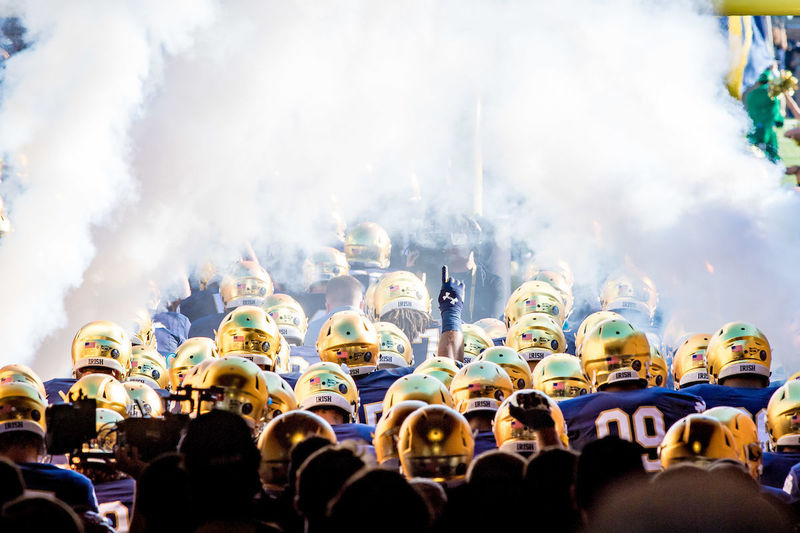 Rob DeCleene enjoys hearing few things more than a reporter throwing it “Back to South Bend” on a nationally televised college football broadcast.

The executive director of Visit South Bend Mishawaka views it as a sign of the city’s growing significance as an event destination.

“You can say, ‘Back to South Bend,’ and people know immediately they’re going back to Notre Dame,” DeCleene says.

The Fighting Irish football team has been central to the region’s tourism efforts for decades. One need only look at Notre Dame Stadium’s sellout streak of 273 games over 46 years to grasp its power, capacity crowds filling all 59,075 seats in 1973 and 77,622 today. Although that streak came to an end in 2019, the regional economic impact of Notre Dame football — and of Irish athletics at large — only continues to grow.

In the most recent of the University’s economic impact studies, reviewing the 2016-17 academic year, Notre Dame contributes an estimated $2.46 billion to the region encompassing Indiana’s St. Joseph, Elkhart and Marshall counties. The report attributes $256 million to event participant spending — including athletic, alumni, educational and cultural events — with $185 million generated by football game visitors each year.

On average, a single football weekend brings $26.4 million to the local economy. Roughly 100 private planes fly through South Bend International Airport for a typical game, and hotels throughout the region reach capacity — hosting more than 300,000 overnight visitors per season — despite higher rates and, often, a two-night minimum. The average hotel room costs $300 per night, though the recent addition of several new hotels in the South Bend area, as well as the burgeoning home rental market through sites like RentLikeAChampion.com, may slow rising prices.

In South Bend alone, visitors spend $84 million on lodging, food, transportation and retail during a football season. That number grows to $102 million for the whole of St. Joseph County and an additional $44 million in neighboring Indiana counties.

It’s worth noting, too, that the report preceded the team’s undefeated 2018 season, which earned it a trip to the College Football Playoff semifinal, and the 2019 season that followed it. The Irish home winning streak, dating from September 2017, stands at 18 games, the third-longest in program history.

“From a community perspective, [football] brings vitality,” says Tim Sexton ’90,  ’94MSA, Notre Dame’s associate vice president for public affairs. “It diversifies what we’re able to bring to this community at such a large, large scale that I think, to this point, has been well received.”

But football is just the starting point. With the completion of the Campus Crossroads renovations in 2017 — which included the installation of a video board and the addition of several high-end hospitality spaces — the stadium has a newfound ability to host nonfootball events.

The first of those came to life in October 2018, when country music star Garth Brooks performed the stadium’s inaugural concert. Since then, the venue has welcomed the 2019 Bridgestone NHL Winter Classic and an international soccer warmup match between England’s Liverpool F.C. and Germany’s Borussia Dortmund. Billy Joel and George Strait, both scheduled to perform in the stadium this summer, have confirmed concert dates for the summer of 2021.

One major benchmark for the success of such events? Hotel occupancy.

When the Winter Classic came to town over the New Year’s holiday, local hotels saw crowds similar to that of a football weekend. Occupancy was up more than 300 percent on December 31 and 160 percent on January 1, with daily room rates up more than 100 percent, generating revenues per available room several times greater than precedent.

“We are not a New Year’s destination,” DeCleene explains. “To see the hotels almost full, in the 70 to 80 percent occupancy range for New Year’s Eve and New Year’s Day, is unheard of.

“When we share those numbers with the University, I think they get as excited as we do, because they see that it’s working. They see how it’s translating in events that we were not able to host prior to this, how that is impacting the local economy. I can’t say enough about it.”

The other Irish athletic programs contribute to the community pie, too. Though football visitors accounted for 60 percent of the 1.1 million total attendance at Notre Dame sporting events in 2016-17, nonfootball athletic spectators — especially the combined 293,000 attributed to men’s and women’s basketball — generated an additional $10 million for South Bend, $11 million for St. Joseph County altogether and $13 million total for the state.

And Notre Dame Stadium isn’t the only Irish athletic facility yielding benefits to the local economy. An additional 70,000 people visit Purcell Pavilion, Compton Ice Arena and other campus venues for Harlem Globetrotters games, America’s Youth on Parade (a national baton-twirling competition held at Notre Dame since 1970), hockey tournaments, the Sunburst and other footraces, and sports camps. The infrastructure — hotels, restaurants and transportation — needed to support Irish athletic events helps the University and city attract these other audiences.

The mutually beneficial relationship only continues to flourish, Sexton says. “We’re tracking how we do, because a lot of what we do determines whether others are going to come to this area.”

Joanne Norell is alumni editor of this magazine.