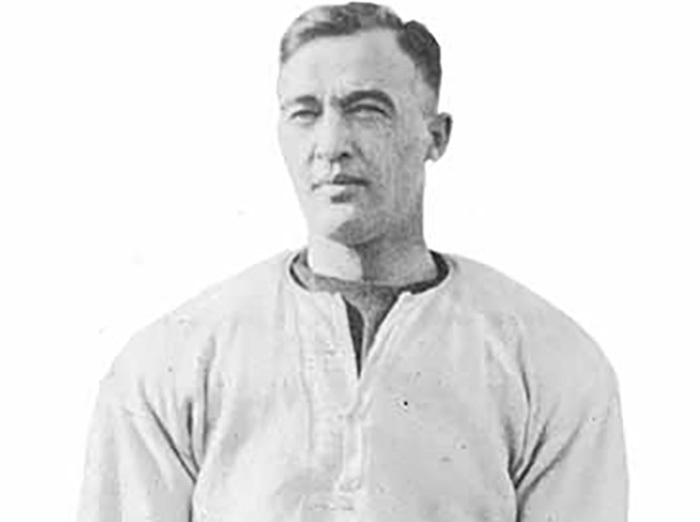 George Gipp, a legend who could never be caught.

Editor’s note: George Gipp died 100 years ago today. This article first appeared in our autumn 1978 issue. Arthur J. “Dutch” Bergman played football at Notre Dame in 1915-1916 and 1919, and was a teammate and Sorin Hall roommate of Gipp in 1919. Bergman went on to a career as a college and pro football coach, providing these recollections of Gipp before his own death in 1972.

“George Gipp is a Notre Dame legend now, revered for his lovable qualities, but he was quite a problem for Rockne. Discipline irked Gipp. Practice bored him stiff, and he never really trained during his meteoric career. A headstrong individualist, George scoffed at curfew hours, shunned drills whenever he could, loved liquor, smoked cigarettes during the season and sat up many a night playing pool, craps or poker. He averaged three or four hours of sleep a night.

“Gipp was a born gambler, on the gridiron and off. He had a genius at cards as well as athletics. Nobody around South Bend could beat him at faro, craps, pool, billiards, poker or bridge. He studied the percentage in dice rolling and could fade those bones in a way that had professionals dizzy. At three-pocket pool, he was the terror of South Bend parlors.

“George was the soul of generosity, always sacrificing himself for down-and-outers. Though he came from a poor family, money meant nothing to him. I saw him win $500 in a crap game and then spend it all buying meals for destitute families.

“But some men just aren’t born to conform with copy book rules. Gipp chafed under training restrictions. He reported for practice only three days a week, despite Rockne’s protests, but on Saturdays Gipp played like a man possessed. A shrewd student of human nature, Rockne gave Gipp free rein and winked at his capers. Nobody but Gipp ever got away with what he did under Rock.

“‘Hello, Gipper, got the asthmas today?’ Rockne would ask when the prodigal son came out for a scrimmage drill. We players made a private rule that anybody caught snitching a cigarette would get a kick in the pants. Gipp never waited to be caught; he’d come and tell us: ‘Kick me hard, boys. I just had a smoke.’ We did.

“Some blue-nosed Puritans will tell you that Gipp would have been an even greater player if he had trained. Personally, I think a genius like Gipp would have burned up if he hadn’t let off steam. His amazing gift for relaxation probably sprang from his lack of repressions. That’s a dangerous doctrine for the average kid. Gipp was the exception that proves the rule. A coach’s headache during the week, Gipp was a coach’s dream on the field.”

Dutch Bergman talks about his famous roommate. Gipp died at the age of 25 in a South Bend hospital. The Chicago Herald, commenting on his death, said: “... He brought honor to himself, honor to his college. He lived as many a man dreamed of living — for accomplishment; he dies as many a man would be willing to die — in the flush of fame.”