The Inauguration of Father John I. Jenkins, CSC 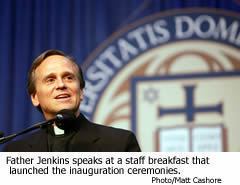 It was a celebration unlike any in University history. The occasion was the inauguration of Rev. John I. Jenkins, CSC, as Notre Dame’s 17th president. But the two-day observance included fun and formalities, fireworks, a dance, and a two-hour panel discussion hosted by Tom Brokaw that explored the tensions between faith and politics in a pluralistic world.

On the evening of September 22, 2005, the Marie P. DeBartolo Center for the Performing Arts and Washington Hall hosted performances by the Ramsey Lewis Trio, internationally acclaimed pianist Leon Fleisher joined by the Notre Dame Symphony Orchestra, and bohola, a Chicago-based Irish folk band—and a screening of Babette’s Feast, one of Father Jenkins’s favorite movies.

On September 23, Father Jenkins celebrated Mass in Sacred Heart Basilica, and, later, about 1,000 faculty, trustees, alumni and guests—attired in academic garb—processed from the Main Building to the Joyce Center for the official convocation ceremony during which Father Jenkins was invested and gave his inaugural address.

In addition to these highlights, there were dinners and receptions, a staff breakfast and student entertainments. The festivities—as much about the University as the man installed as its president—had their solemn moments, their expressions of faith and vision, their affirmations of institutional renewal and resolve to go along with the conviviality. 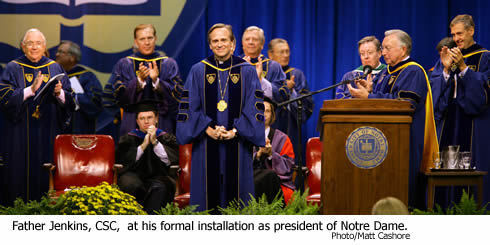 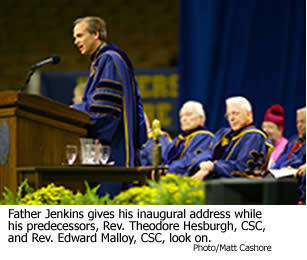 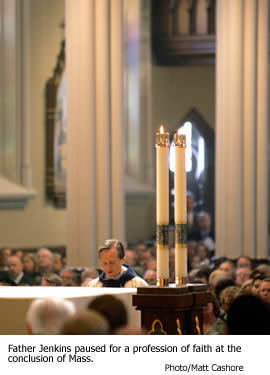 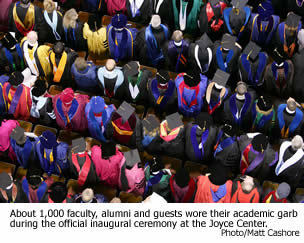 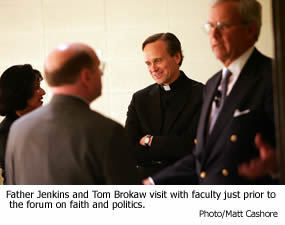