“We greet the friends of Notre Dame and St. Mary’s. It may be well to explain to them the object of THE SCHOLASTIC YEAR: It has been undertaken in order to give to parents frequent accounts of the institutions in which they have placed their children; institutions in which the parents’ hearts must be, so long as their children remain, and of which all who have visited it retain, we hope, a pleasing remembrance.” — “Salutatory!” The Scholastic Year vol. I no. 1, 7 Sept. 1867 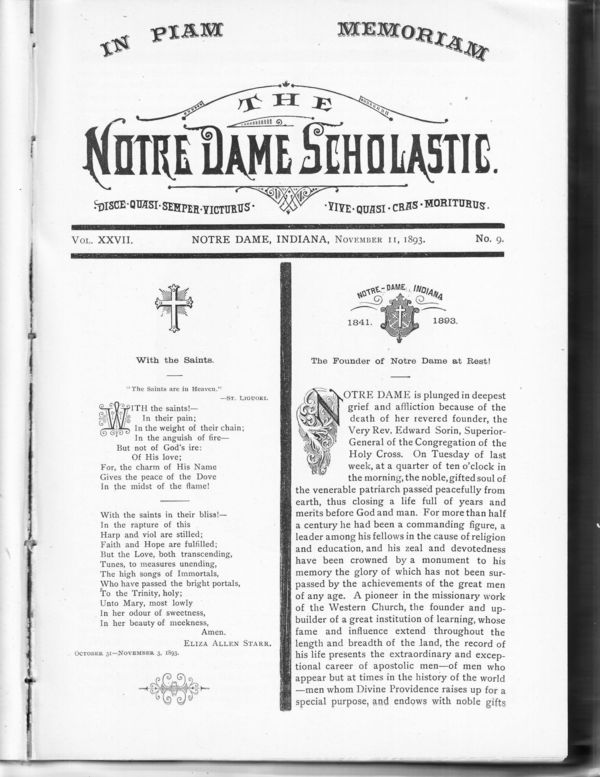 Philip Graham, once the publisher and co-owner of The Washington Post, was fond of describing journalism as the “first rough draft of history.” Through perspective and narrative, journalists’ duties are to record the happenings around them, disseminating that same information to all audiences and, thereby, the general public.

They undermine authority if corruption is afloat; record the tidings of movements and counter-movements; stand behind fact and unobjectionable truth. Within all of these missions, however, journalists are, at heart, storytellers.

In its 150-year history, Notre Dame’s Scholastic has told many stories. The publication originated in 1867 with the aforementioned missive, and was originally titled THE SCHOLASTIC YEAR. It took various forms throughout the next century and a half, never ceasing publication, but manifesting in different iterations.

In honor of the 150th anniversary of the campus publication of record, we pored through the archives, tracing Scholastic’s history from 1867 to 2018, and its coverage of all of the notable events in between. In our explorations, we discovered the voice of the changing tides of the Notre Dame student body, as the university charted a new course in the nation’s academic channels while the country embraced fresh stature on the international stage.

“‘Today’s news wraps tomorrow’s garbage.’ The time-worn advice of the cynical old reporter to the eager young cub has little application to the familiar campus publication. Nor does this attitude prevail among SCHOLASTIC reporters eager to contribute to the never-finished historybook of Notre Dame. Even the old hands on the editorial staff find themselves too busy to be cynical, enmeshed in a never-ending series of deadlines. They have little time to even consider the possible indifference of the SCHOLASTIC’s so-called ‘captive audience.’” — "The Scholastic: A Close Look” by Jim O’Brien The Notre Dame Scholastic vol. XCVII, no. 4, 21 Oct. 1955

As the 125th anniversary issue of Scholastic tracked, the name of the publication was changed from The Scholastic Year to The Notre Dame Scholastic in 1869; ultimately, it would become The Scholastic or Scholastic — all of the above occasionally stylized in all caps — depending on volume. Ian Mitchell writes that before Scholastic, published by Ave Maria Press, first came into existence, four separate student publications had been created and met their end — The Notre Dame Literary Gazette, Weekly Bee, Progress and Olympic Progress. While Scholastic was originally founded for parents by faculty, it was placed in student hands after a few short months, under faculty control. Though the power and enforcement of that control has wavered over the years — reflecting general student-administration relationships — today, the faculty advisor is solely allowed to advise, not censor or approve. The makeup of Scholastic has always changed to reflect its student body: During World War II, when Notre Dame stayed open through the training of soldiers on its grounds, the leadership of Scholastic included military and civilian staffers to reflect the blended student population. Its first female editor-in-chief shortly predated coeducation within the student body. For as long as Scholastic has stood, its editorial board has been populated with students from across the colleges — with a shared love for storytelling and journalism, if not congruent plans to go into the industry. 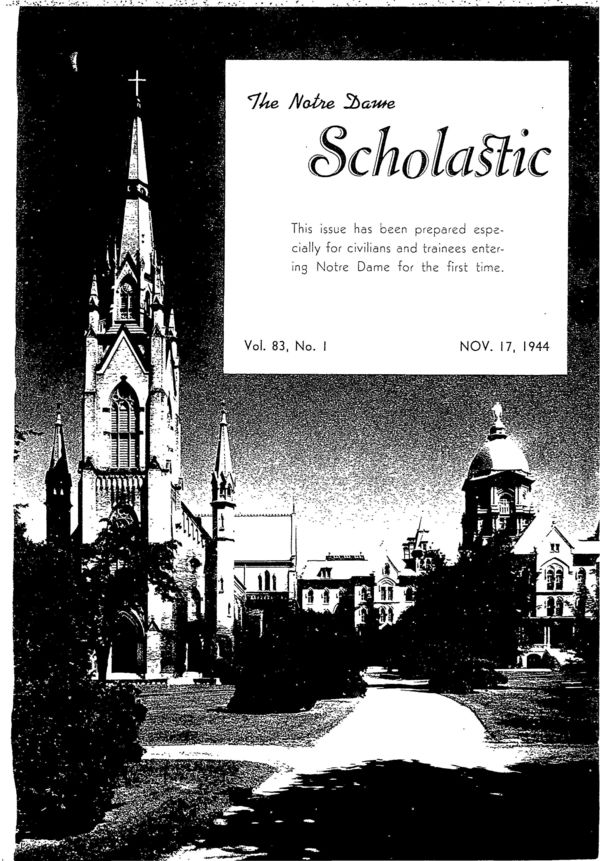 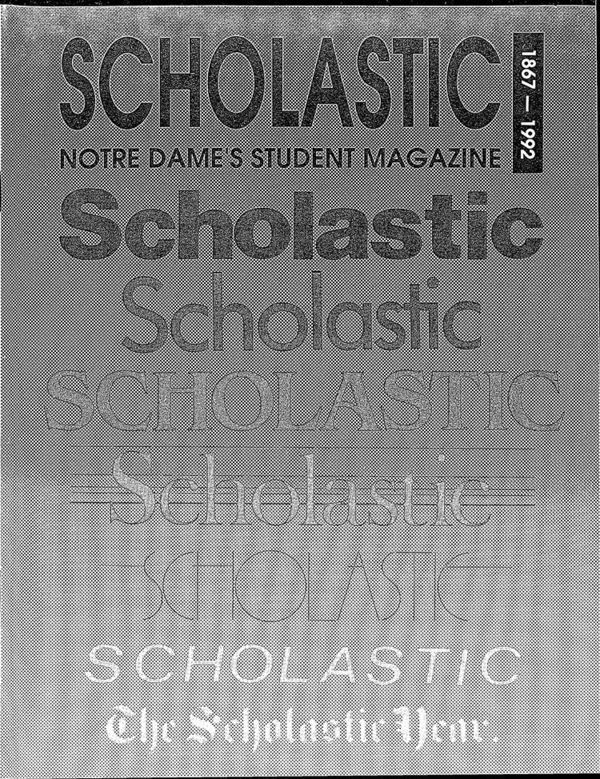 Scholastic began as a bulletin and took many forms over the years, going from a weekly to a biweekly, to a monthly when The Observer emerged as a student-led daily, then a biweekly and a weekly once again. Today, Scholastic takes the form of a monthly, 32-page newsmagazine — along with online exclusives. Its staffs herald longform and comprehensive story packages; 3,500 of each issue are printed, sent to alumni and parents of students across the country, former editors across the world and stacked in newsstands across Notre Dame’s campus.

“On fire, in flames, in ashes! Such is the history of Our Lady’s College for a few short hours, beginning at about eleven o’clock on Wednesday morning, April 23d, 1879. The story of alarm, of hurried help, of almost superhuman but vain labor in extinguishing the raging flames, and finally of saving whatever of value that could be snatched from the fire, has all been graphically told by the daily press for the past few days, and we have hardly the heart to go over that dreadful story. But our friends have a right to hear from us through our own little paper, and so they shall, for, thank God, our printing-office is one of the precious things spared by the devouring element.” — “Our Great Calamity: The University Destroyed By Fire. Notre Dame Stretches out her Hands to her Friends Everywhere for Help in her Affliction” Notre Dame Scholastic vol. XII no. 34, 26 April 1879

As Notre Dame’s campus grew, the Scholastic offices took residence in various old and emerging parts. Its offices have called Ave Maria Press home, as well as the basement of Farley Hall, LaFortune Student Center and, most recently, the basement of South Dining Hall and the second floor of Duncan Student Center.

Until 2017, Scholastic had its home in the basement of SDH, where the tack-boards and surrounding empty spaces were papered over with in-house style guide reminders, old covers, photo montages and more, all dependent on the theme of each wall.

In one corner were the physical archive books — one set of which is held by the University Archives, and the other by Scholastic. Spreading across the major expanse was more than 15 years’ worth of covers, arranged neatly in sequential order. Editors and designers often went there for inspiration about which themes required returning to, and what decisions stood the test of time. Paper plates had scribbled directions about punctuation; hot pink sheets of printer paper were filled with blunt editorial commands. The next wall held a board, falling apart by the end of the office’s usage, separated by the six stages of Scholastic production weekend. And the final wall had a random assemblage: of faces of editors that had made their way into the magazine, of candid shots from formal photography sessions, of typos in headlines and of generations of staffs’ inside jokes. When production nights tend to end with the creeping in of dawn, every muttered word becomes much more amusing.

Along with the rest of the student-run media, Scholastic recently moved offices — transferring our supplies in December 2017, and officially taking up residence in January 2018. Notre Dame’s campus keeps growing, and Scholastic continues to correlate.

“Noon found the crowd beginning to assemble for the funeral services. Students who had left on vacations returned; sorrowing admirers of Rockne lined the walks and spread over the quadrangle. Rockne’s closest friends, his associates, filed into the church to be with him for the last time, while the great bell in the steeple tolled at short intervals. The balcony of the Administration building was packed with clergymen, faculty members, and newspaper men, and students strained eyes from the roof of the Sorin hall porch.” — "Rockne Funeral Impressive: Father O’Donnell In Inspiring Eulogy Describes Rockne’s Character, Ideals. Sad Throngs Visit Campus to Attend Final Services in Sacred Heart Church” The Notre Dame Scholastic vol. LXIV no. 23, 17 April 1931 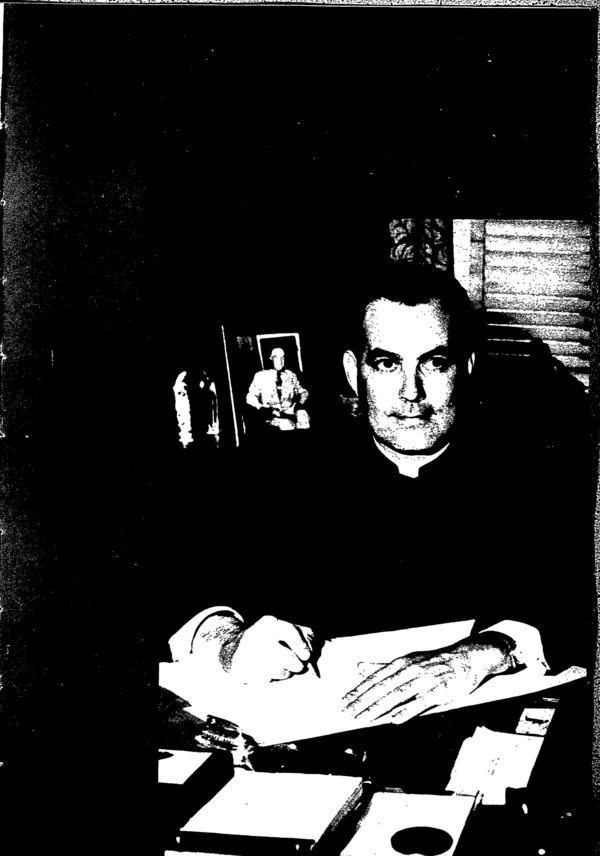 Scholastic covered Notre Dame’s rise from a school known for its location and religion to a university known the nation over for its football — and, ultimately, a place that achieved worldwide acclaim for all of those things as well as its academics. Staffs covered the presidencies of the men who implemented policies and made personnel decisions that allowed those changes to happen — none more so than Rev. Theodore Hesburgh, CSC: Father Ted.

As the twentieth century progressed, so too did a university that better reflected the changing norms of its nation. There was coeducation; two world wars passed and a generational divide emerged over another. Looking at the covers from these stories alone paints a portrait of how the reactions of the Notre Dame student body — specifically, its press — changed in those 25 long years. 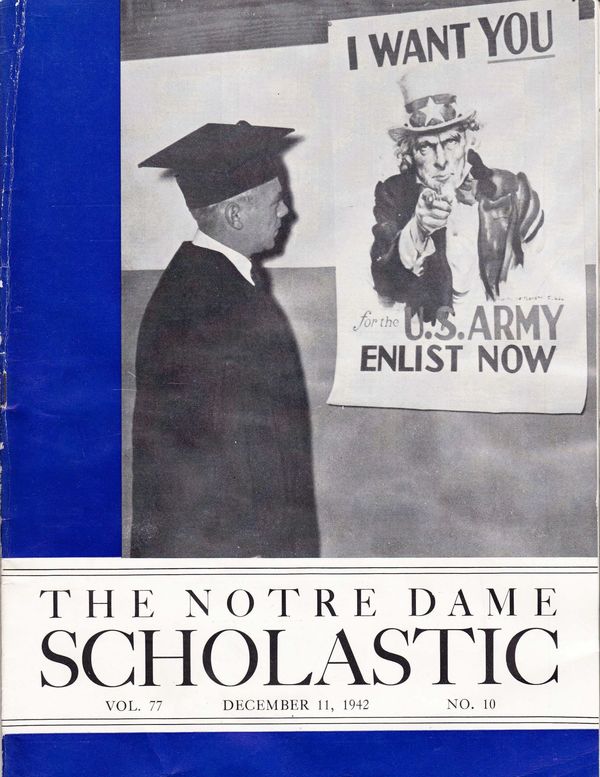 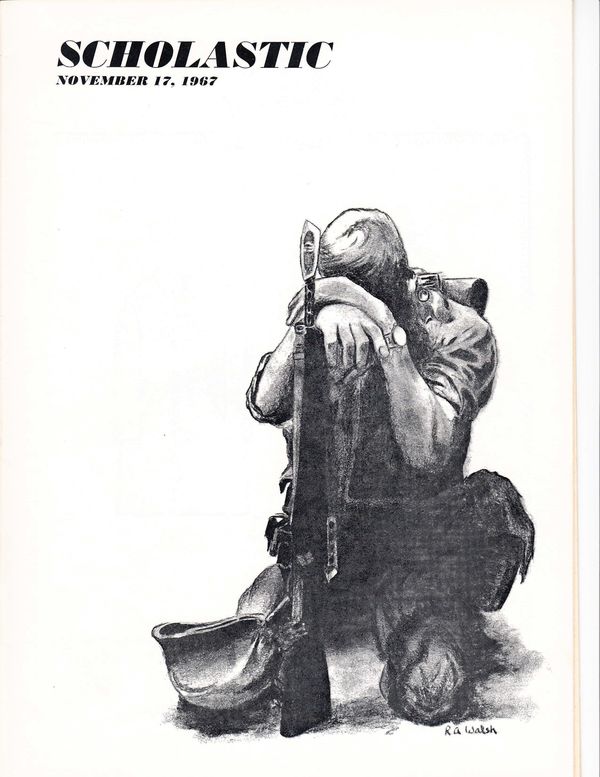 There were deaths of national heroes and Notre Dame heroes and emergences of others. Knute Rockne had a funeral fit for a campus legend; John F. Kennedy’s death rocked the student body just as it did the nation. Extra issues were printed in cases of national tragedy and exception. The presses were stopped once when Cardinal Pacelli was announced as Pope Pius XI in 1939 — the first pope to have visited Notre Dame’s campus (albeit before he had been promoted), according to Mark Mitchell, recalling his grandfather, Mark J. Mitchell’s memories of serving as editor-in-chief in 1938-1939; they were stopped again — albeit figuratively this time — on September 11, 2001, as current print media advisor Bob Franken recollects.

Through it all, regardless of specific medium and aeon, the Scholastic staffs strove to adhere to the only motto ever used in the publication’s existence, first published in The Scholastic vol. VIII no. 2, in October 1874:

On March 23–24, 2018, Scholastic held its 150th anniversary celebrations, current staff members welcoming back editors from the 1950s to today. Poring through archives and examining the new office space, the fraternity of this publication shined through. To tell the story of Notre Dame’s campus, and to do it through the pages of this publication, beloved by its staff members, emeriti and current. That is Scholastic’s missive.