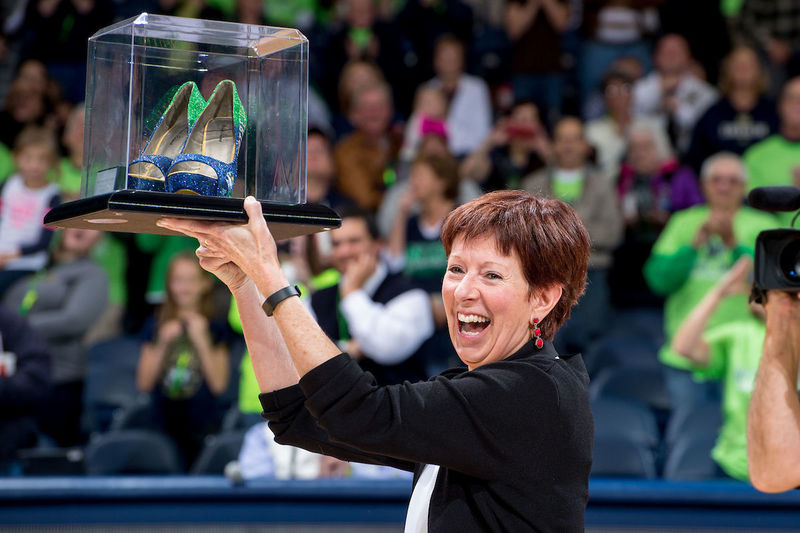 Here’s persuasive evidence that Muffet McGraw is Notre Dame’s most successful coach since Knute Rockne. In 33 seasons at the University her teams won 77 percent of their games, with 29 of her 33 teams winning 20 games or more (including 11 30-win seasons). Those teams won two national championships, made nine trips to the Final Four and took 14 regular-season conference championships. She coached 22 All-Americans, was named consensus national coach of the year three times and in 2017 was inducted into the Naismith Memorial Basketball Hall of Fame. Her teams also packed the house, attracting a loud, loyal and festive fan base to the court inside the Joyce Center, when most women’s basketball teams had difficulty drawing spectators.

She achieved another goal equally important to her. “I want strong, confident women,” she once said, “who are not afraid to use their voice to take a stand.” The proof has been in the lives they have led off court as well as in statements made. In December 2014, the Irish caused a stir by coming out for pregame warmups wearing shirts that read “I Can’t Breathe,” a tribute to Eric Garner, a New York man killed by a police officer who had put Garner in a chokehold. Unafraid to speak out herself, McGraw exemplified the strength and competitive spirit she called for, earning the respect, even love, of those who played for her.

“I don’t remember ever being afraid,” she told a reporter for a 2019 profile in this magazine. “I’m always the person that was motivated when you said, ‘You can’t do that.’”

On a recruiting trip in 2001, she was scheduled to fly out of Boston, but several days earlier assistant coach Kevin McGuff had convinced her to accompany him on a flight out of Providence instead. In a fortuitous twist of fate she has been reticent to talk about, she and McGuff, after boarding and waiting at length for their flight to depart, were asked to deplane. When they returned to the terminal, they learned that planes had crashed into the World Trade Center. The second plane was the flight McGraw would have taken out of Boston that morning, United Flight 175.

McGraw retired in April with 936 career wins, sixth all-time among Division I women’s basketball coaches. She is succeeded by Niele Ivey ’00, the point guard on McGraw’s 2001 national championship team. Ivey, a St. Louis native, joined McGraw’s staff in 2007 after a WNBA career. She was an assistant with the Irish until she coached with the Memphis Grizzlies in the NBA during the 2019-20 season.