You know that old joke about Ara Parseghian?

During a wintry game early in his tenure as the Notre Dame football coach, the students start chanting, “Ara stop the snow.” He turns to an assistant coach and says, “Do you think I could?” Several years and many victories later, the chant arises again on another snowy Saturday, but this time he asks, “Do you think I should?”

Two national championships and 95 wins in 11 seasons from 1964 to 1974 convey an aura of omnipotence — and when it comes to Fighting Irish football, he was a savior of sorts. He rescued Notre Dame from a decade of mediocrity, including five straight years without a winning record prior to his arrival. But the punch line to the “stop the snow” joke lands in part because Ara never confused himself with the great meteorologist in the sky. 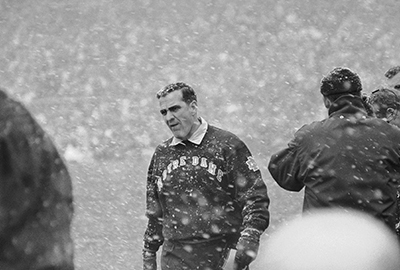 Ara in the snow. Photo by Charles Harrity, 1967 AP

Although a deity in the eyes of many fans and players — “a charismatic, all-seeing god on the high tower at practice,” Michael Oriard ’70 wrote of his coach — Ara’s reputation grew out of a simple, decent humanity that the highest of football triumphs and the lowest of life’s trials did not alter.

In the old pictures, with his piercing stare and square jaw, he does look like he was carved from stone to be a football coach. An actual statue would come in due time, but for all the achievements that put him on a pedestal outside Notre Dame Stadium, bronzed and hoisted on the shoulders of his players, Ara resisted being held up as bigger than life.

That explains a lot about why he looms a little larger in the Notre Dame imagination than even other icons in the football pantheon. Why his death in August at age 94 felt like a personal loss to so many people.

He was always one of us. Better than most in his chosen profession, a charismatic leader who set a standard nobody has matched here since, but he never held himself above or apart, even in the hot, isolating spotlight of coaching Notre Dame football.

No amount of success eased the pressure. The job was hard on him. You can see that in the photos, too. Toward the end of his tenure, the jet black hair is graying, the features strained and creased.

Ara told sportswriter Terence Moore that he knew it was time to step down after, of all games, a 14-6 win over Navy in 1974. Less than a year removed from a second national title, he arrived home that night so exhausted he could hardly haul himself out of his car. He decided that season would be his last.

Only 51 at the time, almost half his life still ahead of him, he retired to a more serene lifestyle of business and broadcasting and golf, only to have the worst fate imaginable befall his family. Ara’s three youngest grandchildren suffered from the neurodegenerative disease Niemann-Pick Type C. Between 1997 and 2005, Michael (age 9), Christa (10) and Marcia (16) died.

When they were diagnosed, he established the Ara Parseghian Medical Research Foundation, an effort that could not save his grandchildren but that continues to support the cause of treating and curing the rare, genetic disorder.

Ara and his surviving wife of 69 years, Katie, also lost one of their three children. Karan Parseghian Burke died in 2012 at age 61 after suffering from multiple sclerosis for many years. He could rage in private at the tragic accumulation and did not shy away from opening up about the pain.

“Sometimes over the years when I was in the car and alone with my thoughts, I just wanted to pound the windshield out,” Ara told former South Bend Tribune sports columnist Bill Moor for the athletic department’s 2015 Strong of Heart publication.

Even when it was too late to prevent his family’s devastation, though, he remained dedicated to raising money that would spare others the same sad destiny, enduring an unbearable personal toll with grace and fighting on with determination.

We cheer the football championships but celebrate a legacy that’s much larger. Ara showed us by example that it’s possible to experience the greatest of losses and still be undefeated.