It appears early each Advent season, the massive crèche mounted on a platform of hay bales at the eastern edge of Notre Dame’s Grotto. Vibrantly colored, oversized figures of Mary, Joseph, an adoring shepherd, the oncoming Magi, some eerily well-groomed livestock and a girlish angel overhead, all symmetrically arranged around an empty patch of stable floor. All the figures, even the animals, have credulous and startled faces. The Baby is not yet where their apprehensive gazes fall.

While it is unlikely to be mistaken for a great work of art, this Grotto nativity scene is nevertheless irresistible, and not just for those small children whose parents bring them there to marvel and gawk and wonder where the Baby is. Naïveté is commendable in this season. 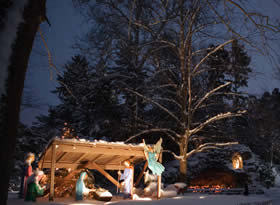 Early in the 13th century, after constructing a manger scene that was probably very much like the one in the Grotto, Saint Francis of Assisi choked up a bit. His contemporary biographer, Saint Bonaventure, reported how Francis “preached to the people around the nativity of the poor King; and being unable to utter His name for the tenderness of his love, he called Him the Babe of Bethlehem.”

At a Christmas Mass three years before he came to Notre Dame to receive the 1989 Laetare Medal, the novelist Walker Percy experienced something similar and reported it in a letter to his friend Robert Coles. The Mass had begun and an unremarkable homily had been preached when, according to Percy, “a not-so-good choir of young rock musicians got going on ‘Joy to the World,’ the vocals not so good, but enthusiastic. Then it hit me: what if it should be the case that the entire cosmos had a Creator, and what if he decided for reasons of his own to show up as a little baby conceived and born under suspicious circumstances? Well, Bob, you can lay it to Alzheimers or hangover, or whatever, but — it hit me — I had to pretend I had an allergy attack so I could take out my handkerchief.”

It seems appropriate that the astonishment of the Incarnation, of God showing up as an inconvenient baby, can erupt even from banal art and sentimental gesture, from the music of a not-so-good choir, from the words of a dull homily. The doctrine celebrated in the feast of Christmas is an unwieldy one, even faintly preposterous.

At about the same time the Baby is placed in the Grotto crèche, the beginning of Matthew’s Gospel, the genealogy of Jesus Christ (Matthew 1:1-25) will be read at the Christmas vigil Mass in the Basilica of the Sacred Heart. Those attending Mass may be forgiven for drowsing as that long list of occasionally unpronounceable names is read, but even in that monotonous litany, as Dominican theologian Father Herbert McCabe once noted, an arresting truth is glimpsed.

“The thing to notice,” Father McCabe said, “is that God’s plan is worked out not in pious people, people with religious experiences, but in a set of crude, passionate and thoroughly disreputable people. [Jesus] belonged to a family of murderers, cheats, cowards, adulterers and liars — he belonged to us and came to help us. No wonder he came to a bad end and gave us some hope.”

Even people who have strolled by and prayed at the Grotto crèche for many years find it difficult to remember exactly what the yet-to-arrive Baby looks like. Perhaps it will blend in perfectly with the other crèche figures. Perhaps not. We’ll have to wait and see. In amazement.