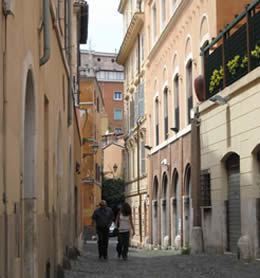 Walking: it can be hard on your soles but good for the soul. This past summer I spent four weeks in Rome, a city that offers ample rewards to hardy visitors willing to walk. I was one of the instructors in an interdisciplinary seminar exploring the relationship between globalism and localism throughout the history of Rome. The Roma Glocale seminar was jointly sponsored by the Notre Dame’s Italian Studies Program and La Sapienza University of Rome.

Before I departed campus I collected my notes, prepared my lectures and bought a good pair of walking shoes. Every day I walked the cobblestoned streets of Rome’s Trastevere neighborhood to a bus stop on the Viale Trastevere to catch a bus to the seminar site across town on the Via Nomentana. Late afternoons and weekends were filled with excursions.

Sometimes these involved meandering strolls with no particular destination in mind. Other times I would stride out at a vigorous pace determined to rendezvous with my students at the agreed upon hour. But because I was on foot, whatever pace I set for myself remained a human one, a pace that allowed all my senses to sample and sort and savor my surroundings. My eyes had time to take in the streetscape; my ears had time to record the neighborhood soundscape and my nose to absorb the aromas of produce markets, street stalls and restaurants.

We live in a culture that too often values speed above all else. Walking is a way to resist the frenetic pace of modern life. The human pace is something we still share with our ancestors. I cross the Eternal City at the same pace as citizens did in the ancient city and pilgrims did in the Renaissance.

A good city walk can be a marvelous mix of planned and chance encounters. Rome, like many European cities, posts historic markers on many buildings recording notable former residents and local events. En route to class I would pass random reminders of other times and other lives. For example, a stone slab on the side of the church of San Rocco on the Piazza Augusto Imperatore carefully records the level reached by floodwater from the nearby Tiber River in the great flood of December 1870. Other plaques mark the birthplaces or residences of poets, musicians, statesmen and saints. One, in a beautiful small piazza near the ancient Porticus of Ottavia, informs passing pedestrians that from the spot on October 16, 1943, Nazi troopers began the deportation of Rome’s Jewish community to extermination camps. Sometimes a walk in the city can be unsettling.

For architects, urbanists and students of city life, the sensorial stimulations (and, yes, even the muscle soreness) that come from long walks through Rome’s dense network of streets provides a valuable counterpoint to the abstractions of maps and photographs. In the classroom I focus the students’ attention on carefully selected examples of architecture and urban design; I can arrange the sequence of images I use to illustrate my lectures to emphasize specific aspects of the city’s history while ignoring others. But once we step outside the classroom or climb off the splendid isolation of an air -conditioned tour bus we come face to face with the gritty honesty and the messy complexity of city life. The monumental and the mundane are inextricably entwined and call for our attention. Cities, like life itself, aren’t neat and tidy. Real cities have a way of keeping us honest and grounded.

In addition to solid disciplinary and professional training, Notre Dame prides itself on providing a good liberal arts education. To see life whole, in all its richness and complexity, is the goal of such an education. In some small but not unimportant ways, walking in the city with all your senses open to the experience is an opportunity to put that education into practice.

Notre Dame Professor Dennis Doordan is an architectural and design historian and the co-editor of Design Issues, a leading journal devoted to design studies.