West Lake Hall is not a building name frequently uttered by the average Notre Dame student. Nestled on the far edge of South Quad behind the Knute Rockne Memorial Gym, it is at least a fifteen-minute walk from the center of campus. 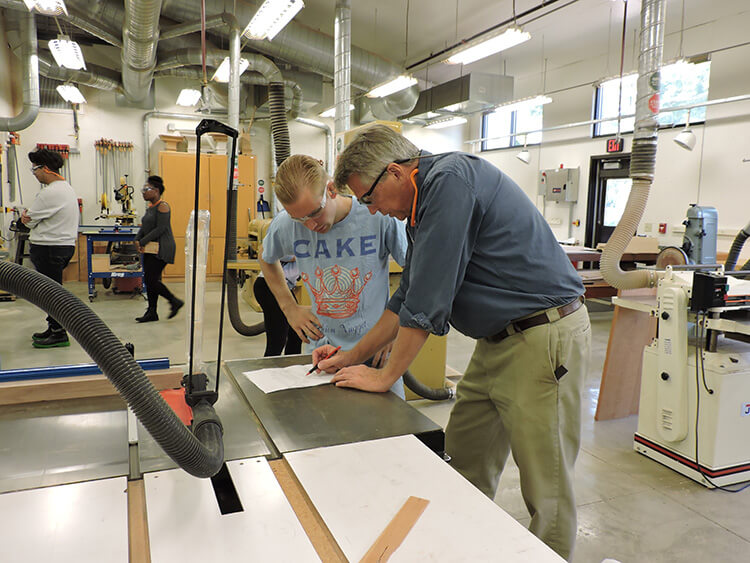 The building primarily supports visual communication design instruction and research in the Department of Art, Art History and Design, and is home to multiple computer labs and creative workspaces. However, if you wander into a small wing off one side of the building, you will stumble upon West Lake’s Fabrication Shop. The shop is a production facility, and has a wide range of tools used by design students in different facets and for different projects.

It is also the home of Robert Brandt’s ARCH 41811: Beginning Furniture. Taught in three-hour blocks on Tuesdays and Thursdays, this class is the introductory offering in the architecture school’s little-known furniture building concentration. It is open solely to fourth- and fifth-year architecture students who are pursuing the concentration, with occasional exceptions made for upperclassmen majoring in industrial design.

Although not widely known to the majority of the student body, this class has been around for almost 27 years. The School of Architecture brought Professor Brandt to Notre Dame in the early 1990s to start a furniture design program in the college, and the rest, in many ways, is history.

Brandt’s background was in art — he holds an MFA in sculpture — but both he and the School of Architecture felt that there was significant crossover between the two disciplines. In art foundations courses Brandt had taught before coming to Notre Dame, he always had students draw from life, in order to understand three-dimensional objects and render them two-dimensionally. Architecture students do the same — you may have spotted first-year Arkies staring intently at architectural details around campus before, sketchbooks in hand — and furniture is a useful medium in which to build those skills.

“It’s a supplement,” Brandt says. “We teach furniture in architectural contexts, so the students start to understand the environments they’re designing a little bit better, so they see the connection between the various scales: urban, building, interior and furniture. It’s just a thorough understanding of all the elements,” said Brandt.

The furniture building concentration is a four-course sequence. It starts off with Beginning Furniture, and then moves onto Advanced, Special Projects 1 and Special Projects 2. During the first semester, students build a small table. They need to learn about the material, the design and how to use all of the equipment in the shop safely.

The idea is to keep the projects simple in construction and in number of pieces involved (think eight or nine, not 20 or 30), but, according to Brandt, “it’s still a design class, so the designs are not that simple. The old saying is that it’s very difficult to make something simple, so they have to synthesize their big ambitions down to something we can handle in one semester, which is tough to do.”

By the time I visited the class last week, the students had put in lots of work. They had completed their precedent studies, designed their own pieces, figured out how much material they needed and what species of wood they wanted to use. The class had recently taken a field trip to local lumber store Johnson’s Workbench to obtain the wood, and they were now in the early stages of machining their wood, working towards the forms, shapes and joinery of their pieces. 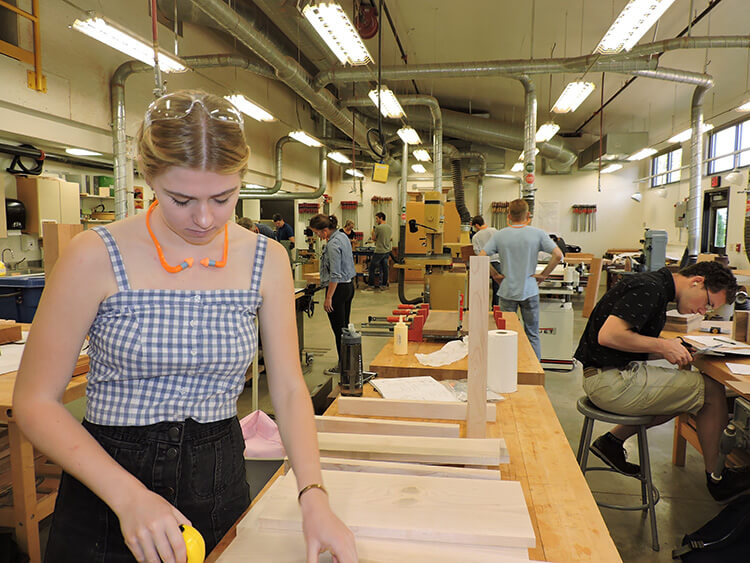 Although Whitesell is not the typical student in the program (read: not an Arkie), she has learned the basics of how to operate various wood shopping machines and the process of preparing wood for building, and enhanced her design skills.

“So far, this class has allowed me to see the production and execution of design. I have used the studio space for design mock-ups, but in this class I will create a fully finished piece for the first time, and gain firsthand experience about the practicalities of design execution.”

Her favorite part of the class has been seeing the variety of designs that her classmates are working on, and collaborating with them on design direction. After shadowing the class, I agree that this collaboration seems like a perk of the course. The class is capped at eight to 10 students per semester for space reasons, and while each student was working on his or her own independent project, the close proximity meant they were still learning from each other.

“Coming into the program, I had some experience with the woodshop,” he says. “In high school I did some technical theater, some stage construction, and out of this class I’ve kind of developed a passion for woodworking.”

Back at home in Atlanta, Keough actually built a small woodshop of his own. He hopes to continue furniture-making after graduation as a weekend hobby, and he says he has learned many valuable skills from the classes in the concentration.

“It’s a whole different way of thinking, both in scale and three-dimensionally,” he says. “When we’re working in studio, we look at buildings in two-dimensional drawings, plans, elevations, sections, but it can be completely different from how you perceive an object. The furniture classes have helped me become a much better designer, being able to see things from the perspective of what they will look like when they are completed.”

In his first semester of the program, Keough created a small table, per the curriculum. Second semester, he built a large chair designed after the Greek Klismos chair with some variation of his own. This semester, in Special Projects 1, he is working on a liquor cabinet with a self-designed locking mechanism.

Before he graduates, Keough will get to experience the new woodshop in Walsh Family Hall. He looks forward to a variety of features of the new space, including its climate control — in the current shop, students have sometimes seen wood shrink or expand because of humidity or changes in temperature.

“We’ll have more space. We’ll take the same equipment but we’ll get a few things added,” he says. “We’re really excited about the new shop.”

Throughout the nearly three decades of teaching this class, Professor Brandt’s favorite part, he says, has always been getting to know the students. 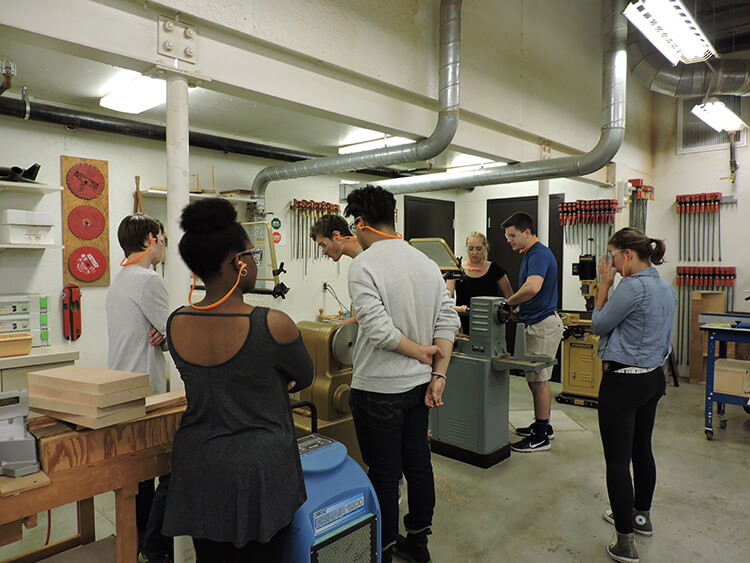 “They’re from a variety of backgrounds, they come in with different life experiences, and I get excited that I have all of these people who are wanting to take the class that I offer,” he says. “Getting to know them and just seeing how eager they are to learn is just amazing.”