The irony of walking past Luigi Gregori’s historical and controversial murals in the Main Building on the way to her class is not lost on Heather Stanfiel. 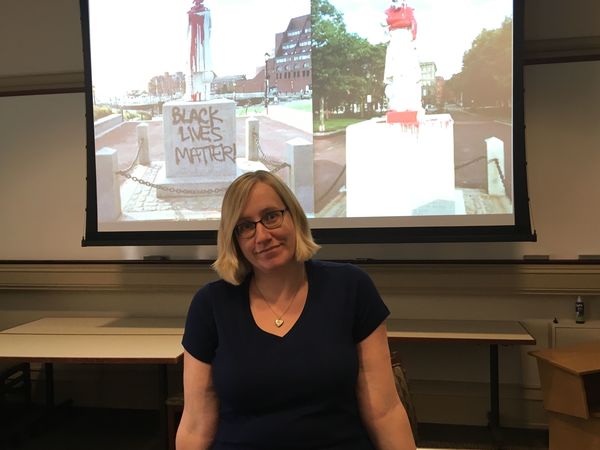 The Ph.D. candidate, who teaches HIST 30006: “Culture, Conflict, and Commemoration” this summer on the administration building’s third floor, sees it as a microcosm of the conflicts she hopes her students will start to see in the world around them — both on and off campus — by the end of the course.

The course looks at public memory — things like statues and monuments, mostly, but this could also include murals or other markers — and how the meaning behind it changes from audience to audience, sometimes causing conflict between groups. Some might find a statue to be commemorative of a past historical figure; others might see a representation of the horrific deeds or negative history tied to the same person. It’s not unique to America, but clashes over Confederate commemorations nationwide are a real-life example that’s taken over headlines in recent months.

Turn now to Luigi Gregori: the dozen paintings in Main Building depicting the voyage of Columbus to the Americas (from commissioning at the Spanish court to early encounters with Native Americans) are significant historical examples of his work, drawn from a career that included artist residencies both at Notre Dame and the Vatican. But the legacy of Columbus — from his contentious national holiday to images, like Gregori’s, that cast the explorer in a positive light — has come under fire in recent years because of how much harm came to indigenous people after Columbus arrived.

“It’s not lost on me,” Stanfiel says. “We’ve brought it up in the earliest theoretical parts of the class, when teaching colonialism. It also brings up a concrete example of, when we have a controversy, how should we respond? We ask questions like: Should a statue be removed? Can we contextualize it? Is it so offensive that we should we take it down all together? If it comes down, should we put it in a museum or melt it down? What are our options?”

Though this is her first time teaching the course, the material is right in Stanfiel’s wheelhouse; her dissertation research is on conflict and memory in Ireland in the 19th and 20th centuries, and the idea that memory can be controversial. As she describes it, a wide smile on her face, “I’m super into statues.” She’d like to see HIST 30006 translated to a full-semester course, instead of just the six-week version taught during the summer session.

"I'd like to see the History Department introduce more classes to the curriculum that connect history to contemporary issues in society. If we can find ways to make history feel relevant to students today, we may attract more majors,” Stanfiel says. “Controversial issues are present in society all the time, whether we think about them historically or not. Teaching students to be critical, historical thinkers will help them better understand the world around them."

Rising senior Ian Aschieris says that, before the class began, he was only loosely aware of this sort of conflict over public commemorations — such as those that have recently made headlines in Charlottesville and other Southern cities. This class has taught him a lot about how different groups might find meaning or legitimization in these monuments.

“They can also be used to encourage people to remember a person or event in a certain way, and even urge others to forget about an ideal, person or an event as memory and forgetting are closely tied together,” Aschieris says.

Stanfiel is mobile during class, walking among desks and often teaching from behind the group as they look at projected images on the screen. She’s adapted the class as the summer has gone on, embracing the visual learners through an increased use of photographs and videos, making it hands-on in the hopes that students will connect with the material and use their newfound knowledge in the real world.

Rising sophomore Jacqueline Fenton says she’s already noticing places of memory around Notre Dame’s campus thanks to Stanfiel’s class. She credits Stanfiel’s passion for the subject and fun classroom style as reasons for her interest in the topic.

“My favorite part of the class is how the class is taught, because, when it comes to a class like history, some teachers can make it very boring,” Fenton says — especially when the class stretches for nearly two hours per session, as this one does. “Professor Stanfiel makes it really interesting though, and it makes everyone in the class want to learn and pay attention.”

The course culminates in a final project, where students focus on either a hometown monument or something else they find interesting, and create an “interactive poster project” online that can include photos, audio snippets and video clips. Stanfiel has high hopes for excellent projects, if the earlier audio projects are any bellwether. She assigned students the task of writing a poem from the perspective of one of these monuments around the world, and she was in awe of the creativity her students showed.

“History doesn’t have to be about memorizing names and dates,” she says. “It can be fun and interactive.”

Try the same experiment the students did in a recent class: What do the following images or monuments symbolize?

Perhaps you’ll find the image of a dove with an olive branch easy to pin down — students thought of peace, life, Mass and the Holy Spirit. Also easily identified but nowhere near as joyful, the image of a Nazi flag symbolized not only Adolf Hitler, but also the Holocaust, white supremacy, racism and anti-Semitism to the class.

The Statue of Liberty means welcome, home, hope, immigrant, nation and pride, according to the students. A statue of Christopher Columbus brings similar connotations of history and nation, but also conquest, exploration, adventure, war.

It gets harder in the reverse — what image would you draw to symbolize crime? Students in the class drew handcuffs, a prison, a robber, and the neighborhood watch symbol. For victory, the class came up with a podium, a gold medal, the Olympic torch, and the Nike swoosh, among others. (Full disclosure: this writer came up with the Cubs’ W flag, but apparently there weren’t any other Cubbies fans in the room.)

Amanda Gray is the digital editor for Notre Dame Law School. Formerly a reporter at the South Bend Tribune, she is currently pursuing her Masters of Library Science from Indiana University-Purdue University Indianapolis.