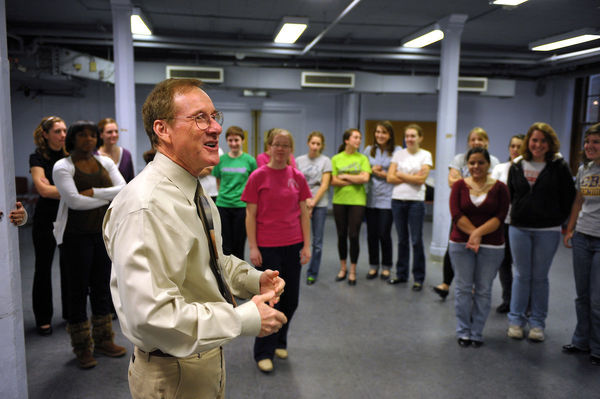 In the rehearsal rooms and performance spaces of Washington Hall, there are always unusual noises — sopranos out-belting each other at a PEMCo audition, pianists arpeggiating, an Undertone practicing his riffs. But a 90-minute slot on Tuesday and Thursday afternoons hosts what may be the most unusual noise of them all: a chorus of 100 students and one esteemed anthropologist tap dancing en masse.

The happy cacophony comes courtesy of ANTH 20900, better known as Irish-American Tap Dance, a legendary elective that James McKenna has taught to thousands of Domers over the past 21 years.

“The minute I put those shoes on and we start our dancing, everything just goes away,” says McKenna, the Rev. Edmund P. Joyce, CSC, Professor of Anthropology. “I think it’s the same for the kids.”

Amid a schedule of rigorous academic courses and a campus culture of high achievement, Irish-American Tap gives students – who come from nearly all colleges and departments – a chance to relax and have fun.

On my recent visit to the class, activities began with a dance set to Michael Jackson’s “The Way You Make Me Feel” and ended with two rounds of a rollicking ceili that sent students unselfconsciously flying around the room, holding hands, trading partners, and laughing as they ran through the steps.

I’m not sure who was having more fun – the students doing the dances or me watching them.

The class has developed a strong following in the two decades that it’s been offered, a reputation that’s reinforced each semester in course evaluations. McKenna sent me a few highlights from recent terms, and they’re glowing: “The most fun class I’ve had at ND.” “I recommended [it] to all of my friends.” “I LOVED TAP SO MUCH” – yes, written just like that, in all caps.

Before entering academia, McKenna was something of a tap prodigy growing up in the San Francisco Bay Area. He was dancing along, untrained, to Fred Astaire on TV by age three, and by junior high was performing on such programs as The Lawrence Welk Show. While he loved dance, though, he never planned to make a career of it.

“I was a dancer before I was anything, but school was always my joy too,” he says.

The tap dancer grew up to be an anthropologist, and once he’d established a professional reputation at Pomona College in the 1970s, he decided that perhaps his two interests could merge. He walked into the school’s dance department, he says, and just asked: Want a tap dance class?

McKenna went on to teach tap at Pomona – voluntarily, on top of his regular academic schedule – for two decades before coming to Notre Dame. He figured he’d pose the same question to ND’s dance department eventually…until he realized there was no dance department.

Under the Department of Anthropology’s umbrella, tap dance ended up on McKenna’s schedule after all, where it has stayed even as accolades have piled up for his non-Washington Hall classroom work.

A preeminent infant sleep expert and chair of Notre Dame’s Mother-Baby Behavioral Sleep Laboratory, McKenna has won the Sheedy Excellence in Teaching Award from the College of Arts & Letters, the Thomas Madden Teaching Award for his work teaching first-year students, and, on two separate occasions, the Kaneb Teaching Award. Thanks to courses like Introduction to Anthropology, his popular Human Ethology class on the evolution of human behavior, and, yes, Irish-American Tap, McKenna estimates that he has taught more students than just about anyone in Notre Dame’s history. 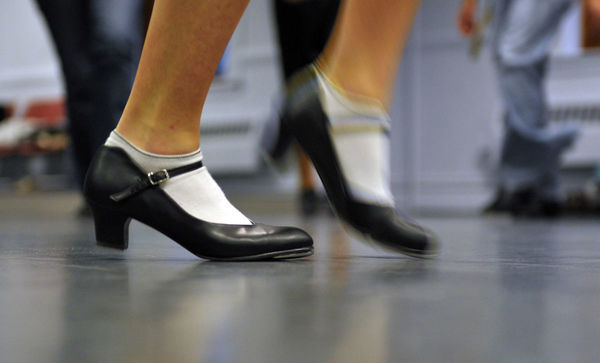 To take it back to those class evals for a minute: “Kindest, greatest professor ever.” “Really cares about his students.” “One of those living saint professors who makes Notre Dame so special.” “He’s incredible in every way.”

“I love my students first and foremost, and I care about them,” McKenna says. The walls of his office are covered in what he calls his vita – photos and mementos from the countless relationships he’s formed in his Notre Dame career. “I feel so privileged in the lives of my students. It’s just enriched me, enriched my life.”

After 21 years at the University, McKenna plans to retire next year, making his current students among the last who’ll take Irish-American Tap. The semester will culminate in a recital on the last day of class, just as it has since McKenna’s first round of ND tap students – who enrolled before some of the current crew were born.

When I mention to McKenna that I wish I’d have taken Irish-American Tap as a student, he suggests that next semester, as many other faculty and staff have through the years (Fr. Jenkins included), I should sign up. After all, it’ll be one of the last chances to take it.

I think of the photo of five-year-old me in tap shoes perched on my parents’ mantel and tell him maybe.

Whoever ends up in the final rounds of ANTH 20900, they’ll be among the masses who’ve left Notre Dame with a pair of tap shoes in their closet and an unusual, joyful noise in their weekly schedule, all thanks to one of Our Lady’s most remarkable instructors.