With respect to my many wonderful professors, I have a confession to make: My favorite Notre Dame class as an undergrad wasn’t at Notre Dame at all. It was in London.

FTT 44702 — “Playing Shakespeare” — is something of a legend among Domers abroad, having been taught in the London Undergraduate Program since 1997. Like all of Notre Dame’s classes in the British capital, the course is taught in the University’s Trafalgar Square building for the first half of each semester, but it is distinctive for its second half, when it moves into Shakespeare’s Globe. 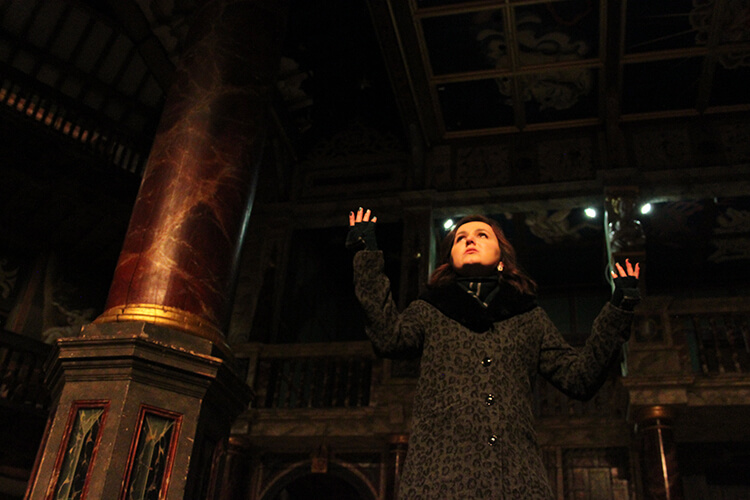 A fall 2018 Playing Shakespeare student performing at the Globe

Playing Shakespeare gives its students the opportunity to perform the Bard’s work onstage at the Globe, which is a reproduction in both architecture and location of the famous playhouse where Shakespeare’s plays were originally performed. As the students from our 2017 Shakespeare cover story can also attest, that is every bit as cool as it sounds.

“It was surreal, in a lot of ways, to stand on a stage that is so hallowed in the theatrical community and [so] historically significant,” says junior Caroline Lezny, who took the class last semester. “It is terrifying at first, but then exhilarating.”

Adding to the exhilaration is the fact that, for many students, Playing Shakespeare is their first time on any stage at all.

“Most students who take the course have never acted,” says Boika Sokolova, who has taught Playing Shakespeare’s classroom segment since 2007. “It is not unusual for students to be a bit apprehensive, and it takes about three weeks for this to change and, by the end of the course, to be forgotten.”

In Sokolova’s portion of the class, students tackle three plays, studying their texts and attending performances around London and at the Royal Shakespeare Company’s flagship venue in Stratford-upon-Avon. Sokolova chooses the plays for each semester based on the theater schedule in the two cities, which produces memorable results.

“The performances I saw that semester have stuck with me years later,” says Steph McKay ’14, who took the class when I did, in the spring of 2013. McKay mentioned the same performance that I remember best six years on: a four-person Macbeth at the Rose Playhouse, a performance-space-cum-archaeological-dig-site containing the remains of a 432-year-old theater.

While the plays are unforgettable experiences in their own right, they are also an essential part of transforming the students’ relationship to Shakespeare.

“To me, live theater is the true entry point to Shakespeare,” says Sokolova. While close reading can require weeks of intensive study, she explains, seeing a production onstage can make you understand a play in a couple of hours. “Theater is fast, engrossing, surprising, emotionally engaging and can completely overturn one’s ideas about the play, based on reading.”

When I signed up for Playing Shakespeare, I was already an English major and theater nerd with a Shakespeare figurine living in my dorm room, but I’d struggled to really understand his texts beyond a couple of comedic favorites. I was thrilled at the idea of the class, but I still hoped that, when it came time to stage a few scenes at the end of the semester, I’d be assigned a small part in something funny. Scene-stealing comedy, if my past musical theater credits were any indication, I could do. Drama? Not so much.

A few weeks into the course, I learned that we would be performing selections from Macbeth and that our Globe instructor, Yolanda Vazquez, had cast me as Lady Macbeth in Act I, Scene V — a 40-line, world-famous dramatic monologue.

I was certain that I’d fail spectacularly. But with the help of three months of reading, watching and rehearsing Shakespeare, I got through it — and emerged a better actor, a better public speaker and a better student of the author I still had two semesters left to explore. I was hooked . . . which, among Playing Shakespeare alums, seems to be a trend.

“Taking Playing Shakespeare while living in London widened the options I see for my future,” says Lezny, a Film, Television and Theatre major, “and it was absolutely my favorite class that I took while studying abroad.”

“Half a decade later,” adds McKay, “it remains one of the best experiences I have had, and I would do it again in a second.”

The latest iteration of the class began a few weeks ago, and the students are already on track for an impactful semester of theater. They saw Richard II this month and, before the term ends, will take on As You Like It and — just like my class did — Macbeth.

“Theater gives you something you’ll never forget,” says Sokolova. “I don’t dare say ‘something you’ll be telling your grandchildren about,’ simply because at this time of life such a thought is well beyond the horizon, but…I am quite sure that treading the Globe boards will leave you with a memory to cherish, and a few practical skills to boot.”

Sarah Cahalan is an associate editor of this magazine and a middling Lady Macbeth.