“A typical class goes like this: Students greet each other, get their name tags (first names only), and sit in a circle, every insider next to an outsider.” 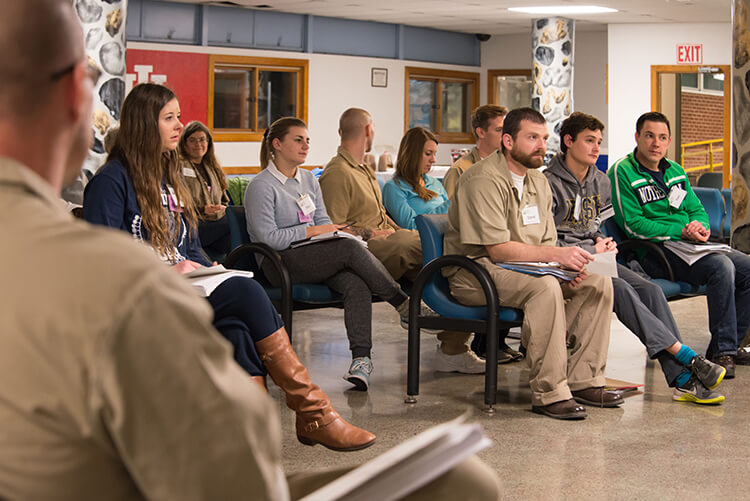 Those aren’t the blunt kind of labels you’d expect to hear in a course about social justice, in which empathy, shared experiences and common human dignity typically underscore, well, everything — but here, it makes perfect sense. As Ed Kelly describes it, the “outsiders” are Notre Dame students enrolled in CSC 33997, Rethinking Crime and Justice. The “insiders” are men incarcerated at Westville Correctional Facility, 45 miles southwest of South Bend.

“The preconceived notions that each group brings to the initial meeting evaporate pretty quickly, as the students learn that they’re dealing with other good human beings like themselves,” Kelly says. He notes that the labels serve as shorthand and that they, too, quickly lose their meaning.

Senior Mackenzie* recalls security checkpoints, barriers and intense anxiety on her first visit to Westville. “Towards the end of the course, the line between the inside and outside students was blurred; we had become one class and had forged friendships based on trust,” she says. Her anxiety slipped away with the group’s very first icebreaker.

Since 2012, Kelly, an adjunct faculty member in the University Writing Program, has co-taught the course with Susan Sharpe, the restorative justice advisor at the Center for Social Concerns, which backs the course. The format hasn’t changed much: Kelly and Sharpe present a topic related to incarceration and prison reform to the class of 32, facilitate small-group discussions and talk it out in groups of 16 before regrouping as a whole class again.

“I was blown away by the kindness and unique personality and perspective each student brought to class every week,” says junior Lily, a student in the Fall 2018 course. “. . .We were able to engage in deep conversation about our readings, how we saw the criminal justice system changing positively in the future, and what our role might be in that process of change, both from the inside and outside.”

Lily's words would make her professors proud. In eight semesters of teaching Rethinking Crime and Justice — the most recent wrapping up late this month — Kelly says the instructors’ mission has not changed: “Mainly we’re interested in raising consciousness and motivating our students to work toward effective change in a system that is clearly broken.”

Common ground formed the basis of many deep conversations among the inside and outside students about “doubts and fears, but also dreams and moral convictions,” adds junior Linde. “We were all humans, capable of intimidation, trepidation, and fear of judgment. It just took me a long time to see it.”

It has to be a personal fight; that’s part of the point. Putting faces to the issue of prison reform — faces of new friends, no less — permanently deepens students’ passion on the topic, and Sharpe says that she wants both inside and outside students “to realize the responsibility that all of us hold, as citizens, for the criminal justice system that operates in our names.”

The mission remains clear across the board. Father Kevin Sandberg, CSC, the Leo and Arlene Hawk Executive Director of the Center for Social Concerns, speaks in almost reverent terms of this course that “fosters the recognition of human dignity where it was frequently withheld” (i.e., behind bars) and “renews hope and prospects for a true common good.” It’s hard to overstate how deeply emblematic CSC 33997 is of the Center for Social Concerns.

“If the Center is to help the University fulfill its stated mission to cultivate a ‘disciplined sensibility to the injustice, poverty, and oppression that burden the lives of so many,’” Sandberg explains, “then both the understanding and practice of restorative justice have to inform our core principles.”

And inform they do. The hope for real-world impact — both personal and institutional — courses through every conversation about CSC 33997. If you were thinking about “doing it for the Insta” (that is, doing it for show), think again. The first tenet listed on the class’s website makes clear:

“This is not a service course — it is not an opportunity to help people in need. It is not about mentoring or building lasting friendships. Rather, this is an opportunity for you to learn about and consider aspects of criminal justice with people who have a different experience of it.”

This point has hit home with Kelly and Sharpe’s students, and it’s clear that the outside students transform just as much as, if not more than, the inside students. Every single one I spoke with used some variation of what Linde says most plainly: “Inside-Out changed my life.”

Though increased national media attention and cultural spotlights from the likes of filmmaker Ava DuVernay and authors Michelle Alexander and Ta-Nehisi Coates have shined a revelatory light on the issue of prison reform, Kelly and Sharpe’s students still typically enter the course with a handful of perceptions and misperceptions about incarceration.

“I expected to be challenged to confront and deconstruct stereotypes. I had no idea how uncomfortable and transformative that would be,” says senior Megan. “Every week, I would return to my dorm to hear my roommate ask the inevitable ‘how was prison tonight?’ question only to feel the questions, the frustrations, the grace, the pain and the hope bubble to the surface.

“This wasn't a course that lasted a few hours on Monday nights; this was a course that I carried with me all week as the processing continued. This is a course I continue to carry with me.”

Practically speaking, though, the course does last a few hours on Monday nights. The 16 students meet once a week at Notre Dame for the drive to Westville, and due to the unusual time commitment, they have to apply to take the class. After a written application and group interview, Kelly and Sharpe personally construct “a diverse class” — a vetting process that has only gotten harder as the popularity of the course skyrocketed from about two dozen in 2012 to 62 applicants for the Fall 2018 edition.

“We try to make sure that potential students understand the purpose and the nature of the course, and we screen out anyone who seems to have a different agenda,” Sharpe explains. “Beyond that we just do our best to put together a group with a mix of ages, ethnicities, majors, personalities, and years in prison.”

Across the U.S. and in six other countries, academics follow the same guidelines every year, part of a broader mission for criminal justice reform that inspired Rethinking Crime and Justice. The Inside-Out Prison Exchange Program developed in 1995 by a Temple University professor from the suggestion of a prison inmate serving a life sentence.

“I believe it was a brilliant invention,” says Sharpe. “And I am proud to be one more person helping to facilitate this profoundly important conversation between people on the inside and people on the outside.” 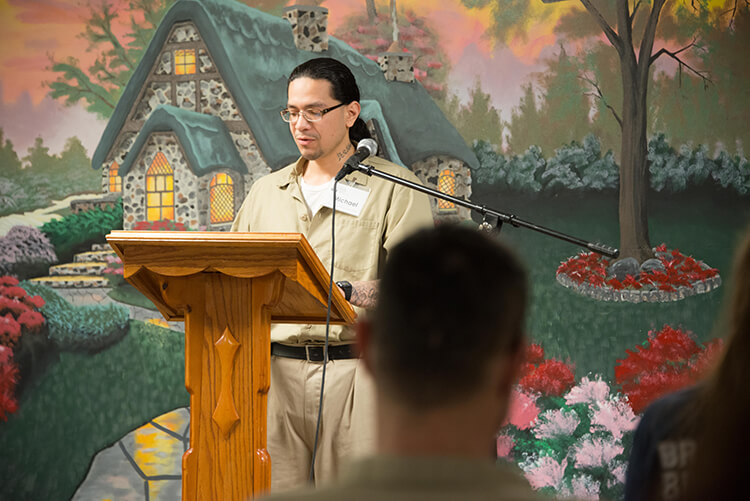 Thanks to Sharpe, Kelly and the popularity of Rethinking Crime and Justice, two more Outsiders are facilitating these conversations at Notre Dame. Led by Mike Hebbeler and Sheila McCarthy, CSC 33974, a.k.a. Prison Writing, runs in the spring, opposite CSC 33997, and offers “a second chance for those who didn’t get into our [class],” says Kelly.

Neither class presses a theology-heavy syllabus, though Sandberg aptly considers CSC 33997 to be a particularly resonant example of the Center for Social Concerns’ purpose in “Catholic social teaching through community engagement.” Even so, Linde says she experienced “exponential” growth in her “faith in God and His creation.”

Even still, there are moments of shock and sadness.

"I was surprised and deeply saddened by the solitary confinement conditions. . .and struck by how inhumane and normalized it has become to put people behind walls and forget about them,” Lily reflects. “It is difficult to express with words how strange it all feels at Westville, as if this is not how humans are meant to live.”

But through even this, the profundity of the responsibility, transformation, misconception and inspiration leave a lasting call for justice in every participant. Kelly says this is the course’s greatest achievement.

“I’m really proud of the fact that Susan and I have been able to cultivate an atmosphere wherein our students learn to engage honestly, respectfully, and sensitively with one another.

“In my view we’re all on sacred ground every Monday night.”

Lesley Stevenson is an alumna of Breen-Phillips Hall, PEMCo., The Observer, and the departments of Film, Television & Theatre and American Studies. Originally from Memphis, Tennessee, she now lives in New York City and works for United Talent Agency in their theatre department.

*Last names of students have been omitted to preserve the anonymity used in class.