On paper, CHEM 40426: “The Chemistry of Fermentation and Distillation” is an overview of the chemical and physical processes that take place during the fermentation and distillation of alcoholic beverages. In practice, it’s a class where students get to brew their own beer.

“Brewing beer on campus?” you may ask. “Is that even allowed?” It is in this class — and students can even sample the finished product, as long as they’re 21.

Age is not a prerequisite for taking the course, though a science background is. The class deals with the chemical concepts needed to understand the molecules, reactions, separations and physical transformations involved in alcohol-making, so a year of chemistry at Notre Dame is required. The course is intended as a science elective for students in the colleges of science and engineering, though it takes a somewhat cross-curricular approach to its subject matter. In addition to focusing on the science of brewing, students also learn about the history and culture of beers, wines, and spirits around the world in a broader culinary, cultural and industrial context. 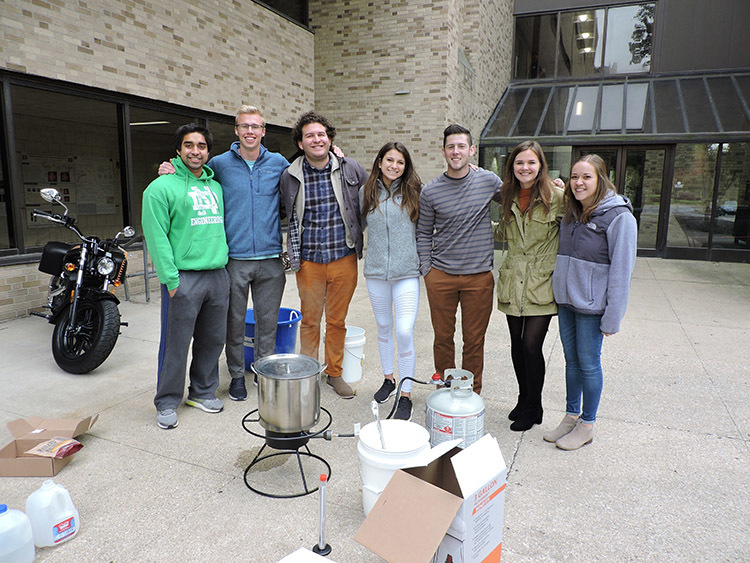 Professor Masaru K. Kuno, a physical chemist with 15 years’ experience at Notre Dame, teaches the class. In his teaching, he tries to emphasize the practical aspects — brewing the beer, experiencing the process from start to finish — and he often supplements his twice-weekly lectures with videos. In lieu of a traditional textbook, students use a detailed set of notes prepared by Professor Kuno.

During lab on Fridays, students get to apply what they’ve learned. The class is split up into groups of five or six students, and they all work together to make the beer. The process of beer making is not actually that hard, according to Kuno, but it requires lots of attention to detail and care in ensuring that everything is sterilized. Kuno buys kits for the students, which provide all of the instructions and ingredients (including malt, grains and hops) necessary for one batch of beer. Each batch takes about four weeks to make, and students are graded on presentations they make after finishing a batch, as well as on class participation.

In this class, Kuno says, students are “learning how chemistry impacts their real life” — because what could be more relevant to real life in college than the occasional beer?

“I think this class is going to be one of the few classes they remember,” Kuno says, “or at least that’s my hope. Simply because it does impact sort of all aspects of their lives. Whether it’s at a party, or at dinner at a nice restaurant, I want them to have the ability to understand what they’re consuming, and to know that yeast, these little micro-organisms, are basically essential to all these products, whether it’s beer, wine, or some kind of distilled spirit.”

When I visited lab on the Friday before Halloween, the students were in the midst of preparing their second batch of alcohol. Groups were able to choose between several different varieties, including the festive (and great-smelling) pumpkin ale, and they all seemed pretty engaged for a Friday class directly before a holiday weekend. In talking with the students, it was clear how enthused they are about the class and the opportunity to learn how to make beer and wine.

Lukas Cepkauskas, a senior chemical engineering student from Wrentham, Mass., is one of the students in the class. Once he found out that brewing was a potential career for chemical engineers and that engineering plays a critical role in alcohol production, he decided to register. He figured that it would be a good introduction to brewing, as well as a fun science elective.

Although the class doesn’t fit into his immediate future plans, he says he would love to start a microbrewery one day, and will definitely continue home brewing after the class is over. While he’s learned a lot across the board in class, he says, he’s surprised by the elements that he’s enjoyed the most.

“My favorite part was definitely the wine unit,” Cepkauskas says. “Before this class, I really didn't appreciate wine, nor did I know much about it. Now I can swirl (and taste) wine like a sommelier!”

Sean Keenan ’17 goes even further, saying that the Fermentation of Chemistry and Distillation was one of the best classes he took at Notre Dame.

When Keenan took the class, it maxed out at 20 students and had three different professors. At that time, students had the freedom to choose anything related to the class to do for an end-of-semester project, so he and his partner decided to brew a beer three different ways and see if people could correctly identify the variations.

“Having struggled at times through very dry and intense foundational engineering courses, it was refreshing to take a small class with multiple professors who were each so passionate about their respective fields,” he says. “As soon as I began taking the class in early fall, I knew I was interested in brewing, so I convinced my roommates to go in on a brewing kit with me. It quickly became my favorite hobby, and it actually has a lot of basis in chemical engineering.”

After the class ended, Keenan continued his new hobby, both through the remainder of his senior year and in his postgrad life. With the support of the Notre Dame Naughton Fellowship, Keenan moved to Ireland after graduation to start a Masters in Biopharmaceutical Engineering at University College Dublin, and he says a brewing kit was among the first things he bought as he settled in overseas. He says he’s brewed around 10 batches so far in Dublin and is a member of his local branch of the National Homebrew Club of Ireland. He’s currently trying to start a home-brewing club in his office, and he hopes to submit a beer for the National Homebrew Competition of Ireland this coming spring.

From taking students on winery field trips to inspiring new transatlantic hobbies, CHEM 40426 is clearly not your typical chemistry class. Professor Kuno’s favorite parts, he says, is watching students complete a batch of beer, and seeing how passionate they are.

“When I teach Quantum Mechanics, Physical Chemistry 1 or 2, Thermo or something like that, the material…” he says, trailing off. “They’ll do it, but I don’t see that joy in there or the deep engagement that you see here.”

So, a note for future teachers: You want engagement in class? Just add pumpkin ale.