Phil Sakimoto and Lenny DeLorenzo have been telling the astronomical and theological story of the universe for years. About a decade ago they collaborated on “All Creation Gives Praise,” a 55-minute planetarium presentation that time-travels across billions of years and eternity.

“All Creation Gives Praise” is a long-running hit in the Digital Visualization Theater at the Jordan Hall of Science. Brother Guy Consolmagno, S.J., head of the Vatican Observatory, has seen it on his visits to campus. He’s a fan.

A few months back, Brother Guy emailed his old friend Sakimoto with a request. Would he consider adapting the planetarium presentation for the Vatican’s exhibit at Expo 2017 — basically the current incarnation of the World’s Fair — in Astana, Kazakhstan?

“My reaction was to quote Mary,” Sakimoto says. “‘Yes, but how can this be?’” 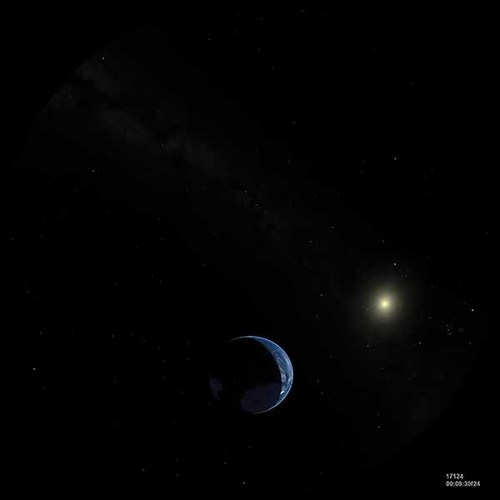 Light, and what it illuminates. Image from "Let There Be Light."

The theme of Expo 2017, running June 10 to September 10, would be Future Energy. The Vatican’s exhibit, “Energy for the Common Good: Caring for Our Common Home,” would highlight ideas about faithful stewardship of the physical world from Pope Francis’ 2015 encyclical, Laudato Si’.

What Brother Guy and colleagues wanted from Sakimoto and DeLorenzo was a 10-minute version to serve as the entry point to the Vatican’s pavilion. To introduce visitors to the themes of honoring creation and protecting the precious physical stuff of it, the light and matter that illuminates and animates life.

“So we got on the phone, we talked about this more, and Lenny and I both say, ‘Yeah, we'll do this,’” Sakimoto says. “That was the easy part.”

A little harder was distilling their story of the universe, already abridged at 55 minutes, down to 10. The result is “Let There Be Light,” a beckoning to awe at the scope of the cosmos and an awareness of the responsibility to treasure and nurture its gifts.

Harder still was navigating the logistics of renting, delivering and installing a portable planetarium halfway around the world. Plus adapting and testing the technology to work through the variables of a faraway and unfamiliar expo environment. And arranging translations of the English voiceover into Russian, Kazakh and Chinese (with the Vatican’s local Italian included for good measure).

Rice University space scientist Patricia Reiff, whose work intersected with Sakimoto’s during his nearly 15 years at NASA, provided the planetarium. Reiff has a company that rents them for educational programs, and she traveled to Kazakhstan in June to help set it up. Her technical expertise extended past the job she was there to do, pitching in to help Sakimoto overcome some hiccups with the on-site projector.

“We share the mindset of planetarium people,” he says. “Even though her official role was just to get the dome up, she wasn’t leaving until she saw that projector giving the right image on her dome, period.”

That above-and-beyond spirit pervaded the whole project. During the production of the McGrath Institute for Church Life and the College of Science, old and new connections emerged to widen the presentation’s potential audience.

Including a Kazakh translation also would be necessary in the host country, a former Soviet republic that has been independent only since 1991. The expo would, in a significant way, be the nation’s introduction to the world. Bordering both Russia and China, Kazakhstan straddles Europe and Asia in geography and culture, its 18 million people representing 130 nationalities.

Finding someone who knew the language figured to be a challenge. Then Sakimoto met Gulaiim Almatkyzy ’17M.S., a Kazakh native who had just completed a master’s degree at Notre Dame’s Eck Institute for Global Health.

As an undergraduate, she attended Astana’s Nazarbayev University, named for Kazakhstan’s only president since its independence. Almatkyzy grew up speaking both Kazakh and Russian, the respective first languages of her mother and father. She’s known only independence and the striving of a young country seeking to shed the “post-Soviet” label, including the facilities for Expo 2017, which rose near her college campus.

“We saw it building from scratch,” Almatkyzy says, and she felt honored that her voice would be included.

She faced one tricky point of interpretation.

“For the word ‘light’ in Kazakh we have two different words,” she says. “I was thinking, which one I should use? The literal meaning of light, or conceptual, which relates to theology?”

In the end, the choice to illustrate the universe in the beginning, the flash of energy that brought forth life, was the theological understanding of the concept.

Even before “light,” DeLorenzo notes, are the words “let there be.” From that phrase, he says, comes “the gift of calling into existence what does not exist.”

Asking audiences to reflect on both the grandeur and fragility of existence, “Let There Be Light” draws attention to the scale of the universe and to the consideration of its source.

“Just to begin to [marvel] at the fact that life, light, energy is,” DeLorenzo says, “that’s already the beginning of the possibility of an act of faith.”

And a step toward a heightened consciousness of creation as precious, requiring active preservation to extend the gift we’ve received — “let there be” — to others. To fulfill in word and deed the promise from the present to posterity expressed in the presentation’s concluding line: “May you be.”