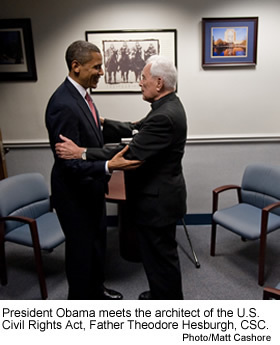 In 1970, a few weeks before I enrolled as a freshman at Notre Dame, a group of us Louisiana high school friends chipped in on a rudimentary beach house in Gulf Shores, Alabama. For two weeks we reveled in a celebration of one of life’s most consequential passages. On the first night a neighbor stopped by to see what we were up to. He then inquired about future plans. When it came my turn and I told him I was soon off to Notre Dame, this man from Selma, Alabama, asked, “Do they let coloreds in there?”

The moment is lodged clearly in my memory because my answer was uncharacteristically bold, and I still can see the look on his face. He did not like my answer. “Yeah,” I said, “but they don’t think they have enough black students there. They’d like to have more.”

I thought of this interchange in the days after Notre Dame’s 2009 commencement, as I thought of ways to assess what all had happened and to offer a bridge to a restorative future. This past spring was a painful time for those of us who love Notre Dame, even those of us with a good dose of realism in our systems. Commencement didn’t make it all go away, but it was a momentous day and there were lessons there for those reasonable enough to look and listen.

During his address the president told the story of Hesburgh getting the commissioners out of Louisiana, where they were wrapping up a fact-finding tour of the South, and up to the University’s Land O’Lakes retreat on the Wisconsin-Michigan border. There they hammered out the agreement that would change America. When Eisenhower asked Hesburgh “how on earth he had managed to broker an agreement between men of such different backgrounds and beliefs,” Obama recounted, Hesburgh explained to Ike that they had “discovered they were all fishermen. . . . So they fished, and they talked, and they changed the course of history.”

During his visit this day Obama was given the well-known photograph (a copy hangs in the Smithsonian Institution’s National Portrait Gallery) of Hesburgh singing arm-in-arm with Martin Luther King, and during his speech Obama saluted Hesburgh,who received a long and admiring ovation. The two met briefly backstage just prior to the ceremony. Hesburgh may very well have told the president he was fulfilling King’s dream; Obama might very well have said his presidency owed much to the former president of Notre Dame.

I knew the Land O’Lakes story. I also knew that the last stop just prior to the commission’s flight north was my hometown — a Louisiana city where the racially mixed commission could not then be fed or housed as a group. I grew up with separate public restrooms and water fountains. Blacks lived in back-alley rows of raggedy shacks, were not served in “white” restaurants, did not attend “white” schools. My Catholic high school admitted a few black students my freshman year, but the city’s public schools — despite offering a “freedom of choice” scheme for a couple of years — did not provide an integrated public school system until I had left for Notre Dame in fall 1970. No wonder the man from Selma could ask if Notre Dame had opened its doors to colored people.

Actually, I misquoted the man from Selma. He had used a much uglier word. But there has been enough ugliness already. And anger. Outrage. Even hatred.

I came of age during a time of protest, of public demonstrations against societal norms and conventions. I lived in a culture divided. I learned the power of demonizing those who are different, of name-calling, bullying and self-righteous indignation, of fueling acrimony and perpetuating the divisions that angry up the blood but bring no peaceful resolution to the problems facing us. And I watched a lot of Christians whose words and deeds betrayed the love and compassion, justice and understanding their Savior had asked of them. All this made an impression on me.

I remember marchers and police on horseback, riots and retaliation. I remember the frustration when singular acts by those on both sides of the divide enflamed antipathies and reversed hard-won progress. I also remember how tough it was to undo centuries of prejudice, institutionalized injustice and systemic inequalities.

I would never equate the Civil Rights movement with the impassioned public discourse over human life issues, nor assign advocates for life or for choice to either side of that conflict. But there are lessons to be drawn here. While movements — whether against war or for women’s rights or the environment — do need attention-getters, the protests, personal attacks and shouting are a lot easier than doing the hard work of understanding, compromise and reconciliation. Disparities and disagreements, history and hostility are formidable, deeply ingrained opponents not easily subdued.

Sometimes it isn’t until we find our common humanity and common purpose that we begin to make amends. Near the end of his talk Obama told Notre Dame’s Class of 2009: “Remember that each of us, endowed with the dignity possessed by all children of God, has the grace to recognize ourselves in one another, to understand that we all seek the same love of family and the same fulfillment of a life well-lived. Remember that in the end we are all fishermen.”

Obama may have been addressing the graduates here, but he certainly was speaking to others listening in on the commencement exercises, including those watching on national television. Alluding to Hesburgh’s call for Notre Dame to be a “lighthouse that stands apart, shining with the wisdom of the Catholic tradition,” and a crossroads where, he said, directly quoting Hesburgh, “differences of culture and religion and conviction can co-exist with friendship, civility, hospitality and especially love,” Obama congratulated the graduates for their example in dealing with the controversy arising from his appearance.

Obama wasn’t alone in noticing the civility with which the Class of ’09 had handled the ruckus surrounding its graduation. Indeed, throughout the spring, as arguments aired in The Observer and as prayerful protests took place on campus, the students demonstrated time and again that disagreement can be handled with respect and without rancor. In a commencement studded with inspiriting moments, their chanting “We are ND,” in response to the outburst of one of the intruding hecklers, was a stirring display of pride, loyalty and solidarity.

Many this spring failed to exhibit such maturity and mutual respect for fellow members of the Notre Dame family. Then there were those with no connection to the institution who used the University’s character and prominence to promote their own agenda. Some of Obama’s political policies do run counter to the Church’s bedrock values regarding human life, and for many Catholics abortion is the paramount issue of our time. But often lost in that single-issue quarrel were his many concordances with other Catholic teachings, and the uncomfortable idea that we are all, here and there, “cafeteria Catholics.”

At least since the days of Hesburgh, the Notre Dame approach has been for the University to harbor tough conversations on complex and incendiary subjects, to grapple with those divisive moral, ethical and spiritual issues, to bring the Catholic intellectual tradition into dialogue with the intellectual currents of the wider world. And you can’t be part of that conversation without engaging those with whom you disagree.

In the lead-up to commencement Hesburgh was very much off-stage, but privately he would say that he had faith that “Our Lady atop the Dome” would use this conspicuous episode for a greater good. He wasn’t worried about anyone changing Notre Dame, he said publically; Notre Dame changes those who come here.

Despite the recognition given Hesburgh, however, commencement belonged as much to the current ND president, Rev. John Jenkins, CSC, as to anyone, even Obama himself. The day was his.

As soon as Obama’s coming was announced in March, Jenkins was the target of enraged criticism. Phone calls, emails and letters poured in to his office. Bishops complained and criticized Notre Dame by public proclamation. Alumni, columnists and cable news pundits debated the controversy through the media nationally. Campus was embroiled, alumni indignant, outraged, disappointed . . . and supportive. Many wanted Jenkins fired. One group, ReplaceJenkins.com, threatened to leverage financial support to keep Obama away.

But during commencement Jenkins held center stage for two of the day’s most memorable moments — his commanding 17-minute introduction of Obama (in which he made clear his philosophical differences with the president, as well as alliances) and the two lengthy ovations he sheepishly, futilely tried waving off at the end of the ceremony. The leadership and quiet resolve of the Class of 2009’s senior fellow would also be rewarded with an enthusiastic standing ovation at the annual faculty dinner a few nights after graduation.

Years ago I learned how little good comes from preserving the schisms that divide us, from refusing to listen to the pleas of others, from vilifying those with whom we disagree. Personal conviction is admirable. We all want Notre Dame to represent those values we personally hold dear. But disagreement, even among members of the Notre Dame family, is inevitable, and certainly expected for an institution that takes on the day’s tough moral engagements in order to have an impact on the world.

The day after commencement the Vatican newspaper, L’Osservatore Romano, said Obama had advocated a “search for common ground” during his Notre Dame talk and had “invited Americans of every faith and ideological conviction to ‘work in common effort’ to reduce the number of abortions.’” And it listed steps he had outlined to do so.

Even in the midst of disagreements, I’m sure most believe the 1.2 million abortions done annually in the United States are far too many. Each year about 2 percent of the women in the United States age 15 to 44 have an abortion, according to the Guttmacher Institute. That’s a stunning percentage, and one that calls for an array of remedies. Sometimes, as Hesburgh and Jenkins know, it is necessary to reach across the divide, to cultivate new relationships in order to wield influence.

It is too soon to say, but one is tempted to wonder if the controversy this past spring will be a watershed moment in the life of this university. Will Notre Dame be the same? Some are so displeased with the Obama decision that they have claimed disaffiliation from the place. How will the family heal after this institutionally defining feud? Some observers ponder how it will affect Notre Dame’s relationship with the institutional Church. Others, having seen how the University was perceived in the national debate as a collision point for moral convictions and academic freedom, will say Notre Dame very visibly enhanced its stature as an independent university, yet one committed to its faith.

From my seat in the press box way up high in the back, it looked like Notre Dame’s aim to be a lighthouse and a crossroads was a message soundly delivered, but not without the pains that come from being in those positions.