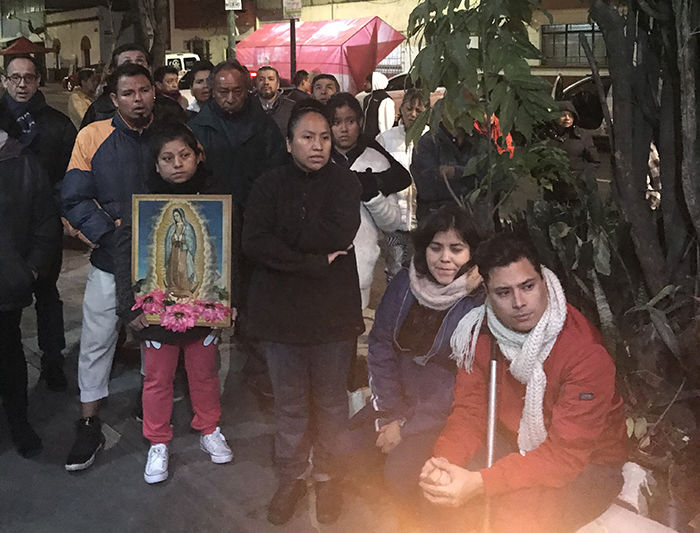 A Mass for Our Lady of Guadalupe in the Mexico City neighborhood of Colonia Obrera attracts an overflowing crowd.

The sixth and final leg of my fall semester sabbatical took me to Mexico City. I first lived in Mexico City during my sophomore year at Notre Dame, 1973-74 BNDI (Before Notre Dame International). I fell in love with Mexico City that year, and that love has grown over all these years. I have traveled back at least a hundred times over the past 46 years.

I wanted to spend the last week of my sabbatical in Mexico City for several reasons. There is, of course, my love of the people, deep faith, music, history, rich culture, great food and so much more.

In 1991, a friend in Mexico City suggested that I begin a Catholic elementary school at St. John Vianney Parish in Goodyear, Arizona, where I was then pastor. It was among the 10 poorest parishes in the Diocese of Phoenix. The parish was 85 percent Mexican and Mexican-American. No new school had been founded in more than 35 years, since the Diocese of Phoenix was carved out of the Diocese of Tucson. Through the grace and goodness of God, and the help of many generous people, including lots of Notre Dame alumni, we began with a preschool in 1992. Soon after, I set out to look for nuns to lead the school.

When I lived in Mexico City during my sophomore year, I met lots of young women at the Universidad Anahuac, where the Notre Dame students spent the year, who had gone to high school at the Instituto Vallarta. I knew that there were nuns there, Daughters of the Holy Spirit. And I knew that it was a very good school.

Long story short: In 1993 I met Sister Margarita Iturbide, F.Sp.S., the superior general of the community of nuns at Instituto Vallarta, and I brought her to St. John Vianney School. For many reasons the sisters were not able to take the school. But God had a different reason for me meeting Sister Margarita.

God sends people into our lives for reasons that we don’t know at the moment. After she finished her term as superior general, Sister Margarita took a year sabbatical and spent three months living and working at St. John Vianney.

There is no way that I could describe how important Sister Margarita is in my life. I met her when I had been ordained for nine years. The three months that she lived and worked at St. John Vianney were a gift from God to me that I will need an eternity just to thank God for. We are still very dear friends 26 years later. She is the wisest and holiest and most human person I have ever known. Who knows if I would be a priest today had I not met her?

So I came to Mexico to celebrate her 88th birthday, which was December 8. During the week that I was in Mexico City, I was able to spend many hours with her. I will always be grateful for her presence in my life. When people ask me when I became a priest, I often say in 1993 — after having met Sister Margarita — though I was ordained in 1984.

During the 1976-1977 school year, I served as director of Notre Dame’s program in Mexico City. There were 20 students in the program. They all lived with families in the same neighborhood. There was a taco stand in the neighborhood that had the world’s best tacos and tortas. We got to know the owner, Miguel Angel Vargas, a wonderful and generous and noble man.

Miguel Angel and his wife and daughters have been friends since then. I cannot remember how many groups I have taken to Mexico City on pilgrimages over the past 25 years, but they have all involved dinner at his taco place which has grown so much since 1976.

For the past 30 years he has invited me to come to his mom’s home on December 11 to celebrate Mass at 11 p.m. on the eve of the great feast of Our Lady of Guadalupe. I have never been able to go because I have always been responsible for or involved in the Mass for Our Lady of Guadalupe where I was serving.

Though I did not know many of the details of the Mass — music, readers, etc. — I was not worried because everything always works out in Mexico! The altar was set and there were about 20 chairs in front of the altar. People began to arrive and by 11 p.m. there were at least 250 people on the sidewalk and out onto the street. I was deeply moved just looking at the people. You could see and feel faith and devotion. Most of them had an image of Our Lady that they would want to be blessed at the end of Mass. I did not have to ask them to participate with full voice and heart. It was obvious that they would. And the music. There were several guitarists, two violinists, a bass guitar and a dulcimer. Everyone sang their hearts out.

Miguel Angel’s mom’s home is in a neighborhood called Colonia Obrera, which means “worker’s colony.” And indeed they were workers, lower-middle-class with such deep faith and devotion. I loved celebrating the Mass and praying with the people and shaking hands and hugging. So beautiful. So real. It’s no surprise to me that Pope Francis seems to enjoy being around such people more than anyone else.

The Mass ended at about midnight and then out of nowhere mariachis began singing Las Mañanitas to Our Lady. There was a 30-minute serenade to Our Lady. Everyone joined in singing all the songs. Even cars driving by slowed down and the people in them would sing. Everyone knows the songs by heart. There were no song sheets.

Following the serenade there was food and drink for everyone — atole, ponche and tamales. Everyone sat wherever they could find a seat — in the house, outside on the sidewalk. The celebration continued. Music, conversation, food — a real foretaste of the heavenly banquet.

At 1:30 a.m. I decided to go back to the hotel. Mexicans are famous for staying up all night for big (or small!) celebrations. When I went to the kitchen to thank people and to say goodbye, they were making menudo, a famous and much-loved Mexican dish. I knew that the people would be there until 5 a.m., at least!

Watching and being part of all this reminded me that Mexicans and Americans could not be more different in how they come at life. To an American, what looks like inefficiency is the way that Mexicans build relationships with each other. What looks like complete chaos and disorganization to Americans is how things get done in Mexico. The scene in the kitchen of a dozen people making menudo is imprinted in my heart as how relationships are formed and sustained.

On December 12, the Feast of Our Lady of Guadalupe, I took the bus and then joined in with thousands of pilgrims walking to the basilica. I wish that I could describe the colors, the music, the sights, everything that is part of the day. It’s unlike anything I have ever seen. It’s very difficult to put into words because it’s beyond words in many ways.

Everyone wants to get into the basilica to see the image of Our Lady, imprinted on Juan Diego’s tilma, hanging behind the main altar. There is a moving escalator in front of the image of Our Lady of Guadalupe. The amount of time on the moving escalator is about 10 seconds. There have to be 150 people on the escalator at any time. Take that number and multiply it by six times a minute, times 60 minutes an hour, times 36 hours. A lot of people. The television stations suggest that there were between 7 and 8 million people who came to the basilica.

There is Mass every hour of the day. I concelebrated at the 2 p.m. Mass. The basilica was completely packed with thousands of people, with thousands more behind the altar on the moving escalator and many thousands more outside in the atrium singing and dancing and praying.

During the second reading, the presider whispered to me, “Will you read the Gospel, please?” “Yes, of course,” I told him. And then he said, “Since you’ll be up there already, why don’t you also preach the homily?” Yikes. Luckily, I had had Mass the night before so I had a homily prepared.

It is difficult to put into words the spirit and faith and soul and heart of life at the Basilica of Our Lady of Guadalupe any day of the year, and on her feast day it’s next to impossible.

Fr. Joe Corpora, C.S.C., who chronicled his experiences around the world during his Fall 2019 sabbatical, will return to campus in the new year.