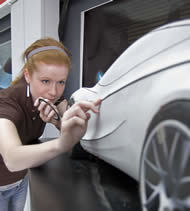 A year ago, if you were to Google my name, you would probably have retrieved a couple obscure results: a MySpace page I made when I used to sing in a band and a long-broken link to an article I wrote for a high school journalism class. Google me today, and you’ll get 15,900 different results: articles, blogs, pictures and reviews about me.

What happened between then and now?

For years I’ve doodled sketches of sports cars, wheels and automaker logos, and I can tell you what kind of car is coming up from behind me just by the headlights. Last fall, like so many times before, I sketched a car, pulled it into Photoshop and added a bit of color. At the urging of Professor Paul Down, my industrial design thesis advisor, I uploaded the sketch and a short essay to an online Mazda design competition held in conjunction with the social-networking site Facebook. I entered about 15 minutes before the midnight deadline.

From more than 4,000 submissions sent in by students, professionals and amateur enthusiasts, the Mazda design team selected 10 finalists. They then let the public choose the winner. Thanks to strong backing from the Notre Dame community, after the votes were tallied there was only one design left on the Mazda Design Challenge website. My name was next to it.

Hardly a week had gone by before I exited a plane in Los Angeles and was greeted by a giant sign that said “Mazda Welcomes Mallory McMorrow.” Before I even had a chance to settle into my room, I was on the rooftop bar of a trendy downtown hotel having cocktails with the Mazda designers.

When I stepped onto the stage at the L.A. Auto Show to introduce myself and describe my vision for the 2018 Mazda3, I was bombarded by cameras, microphones, tape recorders and journalists with their pens out. All I could hear were shouts of “Mallory, over here! Pose with your car! Can we get a smile? Can we get you with the design team!” This was the first time that a full-scale clay car model would be carved in front of a live audience in a mere 10 days, giving the public unprecedented access to a process that otherwise goes on behind closed doors and giving me the chance to work with the designers and modelers to refine the design.

After the show, I was offered an internship at Mazda’s North American Research and Development facility. By accepting the offer to return to California for six months, I gave up what would have been my last semester at Notre Dame and probably my last chance to see many people who have become such good friends over the past four years.

These days there are no journalists asking me what my inspiration was. I no longer have an “action squad” working nine hours a day to perfect my car or little girls asking if they can take a picture with me. Instead, I spend my days doing sketch after sketch of my next car. I am responsible for every aspect of the design process from research to sketches, renderings to quarter-scale model. The only person who will take a look at my work will be Truman Pollard, the lead designer. He’ll simply ask, “How’s it goin’?” and tell me to keep on sketching.

The studio is made up of about 20 of the best automotive designers in the world. My boss, Franz von Holzhausen, has a track record that includes the Volkswagen New Beetle, the Pontiac Solstice and the Mazda Furai. The odds of making it in this business are slim, but the idea of becoming a designer no longer seems so crazy. I have worked on two car concepts. I’ve been in BusinessWeek and Motor Trend and on a television show in China with my voice dubbed over. Soon, though, it’s back to the reality that was my life, just being a girl from New Jersey with a passion for drawing and driving fast.

Mallory McMorrow, who majored in industrial design, will finish her Notre Dame degree work this summer.