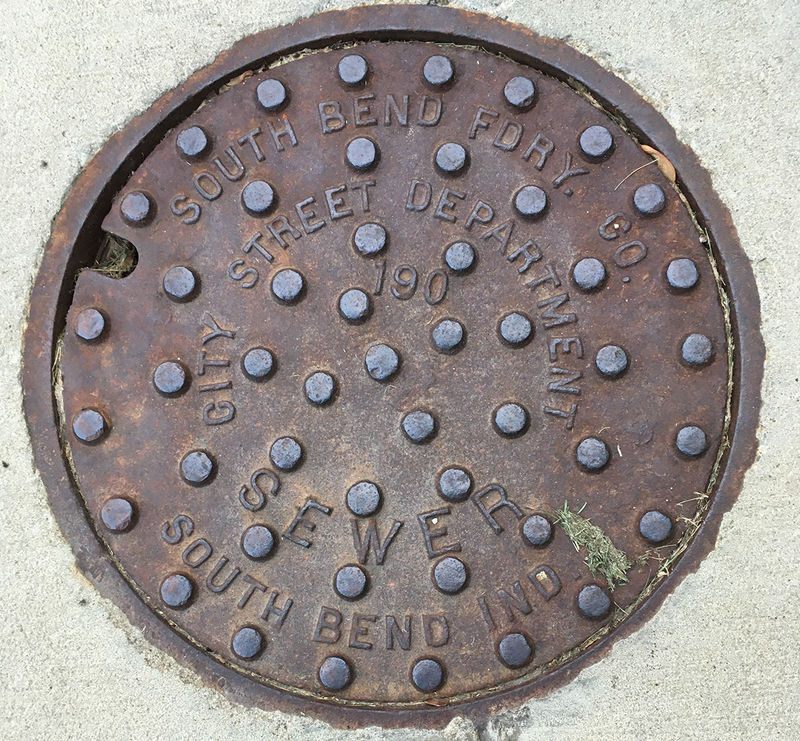 If South Bend is a river town, it is a town of two rivers.

The first, if not counted among the world’s mightiest, is still beautiful, rolling through 206 miles of field, forest and settlement.

The second is a gray stream — on its best days — of surprisingly inoffensive water. It flows through a manmade, subterranean spider’s web of tubes and tunnels buried 10 feet and more beneath grass and asphalt, trees and concrete. If laid out end to end, its segments within the 40-square-mile city would extend some 550 miles.

Some of its waterways, in the older neighborhoods, are hidden beauties of arch-vaulted red Victorian brick. Others are massive cylinders of smooth modern concrete. They sprawl beneath the city, catching its rainfall, its leaves and branches — and all manner of liquids and solids that no one likes to think about.

Naturally, the two rivers flow in the same direction, snaking their ways along parallel northwesterly paths. One swells and slides beneath open Midwestern sky, flowing all the way to Lake Michigan; the other along pipes called interceptors that link all the unpleasant tributaries to their all-important destination, the 1950s-era wastewater treatment plant some 2,000 feet shy of the city limits.

As human responsibility goes, the object of the game is to keep these two rivers separate. To keep the first river clean and clear and usable by all creatures. To keep the second unobstructed and self-contained and out of people’s basements.

“Don’t cross the streams,” the late Ghostbuster Egon Spengler said. “It would be bad.”

And it has been bad. Very bad. In 2011, the U.S. Environmental Protection Agency and the City of South Bend agreed that the municipal sewer complex was inadequate to its job. Half of the system is sewage-only, but the other half combines that function with stormwater drainage. When the rains come through too fast or hard or long, that part can overflow into the St. Joseph River at any of 35 points along its way. Ten years ago this was happening many dozens of times annually, leaking more than 2 billion gallons of untreated sewage into the river each year.

The water’s gotta go somewhere, and in those moments when the pipes are full, it’s either into the river or up into homes.

The city, considering the possibility of massive, perpetual fines for these violations of the Clean Water Act, had little choice but to consent to an extensive, 20-year program of infrastructure upgrades, valued of late at over $1 billion when you include the interest payments. A single underground storage tank costs upwards of $60 million alone, and the 2011 plan calls for seven of them.

The idea was for South Bend to build its way out of a colossal environmental problem — at the cost of about $10,000 for every resident, Kieran Fahey points out. One in five city households would spend more than 10 percent of its total income on sewer upgrades.

As director of South Bend’s long-term sewer control plan, Fahey’s job is to redesign the system and change how it interacts with the river, he says. “Essentially it’s about disconnecting the two.”

A solution had already presented itself at the time city officials signed the federal pact, but its true worth had yet to be revealed. In the early 2000s, Notre Dame engineers led by Professor Michael Lemmon and former Professor Jeff Talley, then a senior officer in the U.S. Army reserves, were looking for civilian applications to test embedded sensor networks that the Pentagon thought could revolutionize military intelligence gathering. The project they developed with the city’s public works department, EmNet, would eventually suspend more than 150 of those metal sensors, each about the size of a cigar, from manhole covers into that gray water coursing beneath the city, collecting and, every five minutes, transmitting basic data about depth and flow.

Better yet, by 2012 the expanding network’s algorithms were translating data into real-time decisions to automatically or manually open and close gates or valves at control sites throughout the sewer system, managing water flow so that relatively empty parts could provide temporary relief during storms.

But most important for both environmental and financial outcomes was the data itself — more than a decade’s worth now that helps Fahey figure out just how much more physical capacity the city needs. Instead of trying to say what might happen when it rains, he says, his team can forecast with near-total confidence what will happen when it rains, based on modeling from every passing April shower to the 100-year and 500-year storm events that seem now to be happening every one to five years.

Years ahead of schedule, and at a fraction of projected costs, South Bend has already reduced overflow volume by more than 75 percent — to roughly 400 million gallons a year even as annual rainfall levels have risen. That’s still a lot, but Fahey and his private-sector partners know enough now to be renegotiating the deal with federal and state regulators.

He was tempted to call the city’s new proposal the “Green Infrastructure and Network Technology Clean River Action Plan” (GIANT CRAP), which said it all, but his team found an acronym that emphasizes wisdom and prudence with taxpayers’ money: SAGE. Smarter Alternatives for a Green Environment.

Four new storage basins instead of the federally mandated seven. Heavy reliance on “green” infrastructure like rain gardens. Greater processing capacity at the treatment plant on Riverside Drive. All at a savings of more than $500 million.

“The Clean Water Act says that any city should have no more than four overflows, or that it must capture 85 percent of the wet-weather flow. South Bend will do much better,” he says, if regulators agree to the new plan. “We will have only three overflows and will capture 99.96 percent of the wet-weather flow. No community that we are aware of is capturing that much.”

Early on, EmNet became a company led by president and chief technology officer Luis Montestruque ’04Ph.D., contracting with the city for services such as data collection and network maintenance. Recently acquired by the New York-based water technology firm Xylem, EmNet is working with more than 40 municipalities with similar woes from San Francisco to Singapore. Nearly 800 cities share South Bend’s problem in the United States alone.

“What we have done is make clean rivers possible. The river is the backbone to the community here,” Fahey says of the South Bend-EmNet achievement. “So we all have an obligation to protect it, and that is something that we can now actually do because we can afford it.”