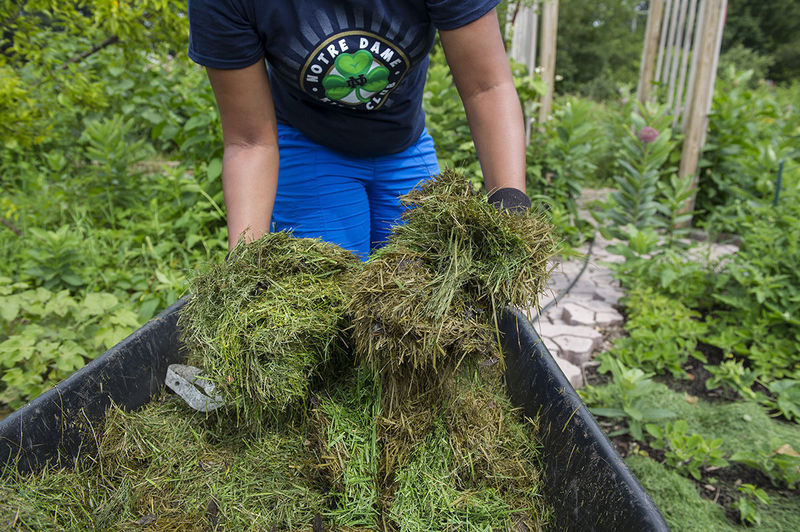 You’re on a tour at Unity Gardens when team leader Hannah Scrafford stoops to pick something yellow and squishy off a vine.

“Try this,” she says, and you do. It’s not exactly a tomato and it’s not a pepper or a bean either. What is it?

Well, it’s food. And that’s a key point of Unity Gardens. Stuff grows here that may be unfamiliar, but it’s better for you than whatever you bought at the drive-thru.

This crusade for changing our food perspectives has been going on since 2008, when Sara Stewart had her aha moment.

A public health nurse, Stewart knew that the root of most of the cases she faced — obesity and diabetes among them — was poor nutrition. The simple solution, for most of us, would be to choose better foods.

But in many neighborhoods, that wasn’t an option. If you live in a food desert, or if time and money are in short supply, you’re simply not going to get fresh fruits and vegetables. More likely, you’ll end up with a corn dog and Fritos from the 7-Eleven.

Stewart’s solution was to start small by planting lettuce, Swiss chard, spinach and kale in a small garden near a homeless shelter south of downtown South Bend. She dug the dirt herself and hauled in five-gallon buckets of water. When the first harvest was ready, she told neighbors they could pick whatever they wanted. It was all free. Once the spring crop was gone, she put in tomatoes, cucumbers, corn and zucchini.

Friends and volunteers pitched in the next year as Stewart set up gardens around the city. These Unity Gardens, as she called them, would show up on vacant lots, on church lawns and near school playgrounds. Twelve years later, Stewart’s simple idea has become one of the strengths of the city.

Most summers, the 50 or so gardens are created and tended by individuals and organizations. Many operate autonomously with minimal guidance or direction from Stewart and her staff.

The centerpiece is a seven-acre spread on South Bend’s west side, flanked on one side by the old Bendix factory complex and on the other by the subsidized housing of Beacon Heights. There, depending on the season, you’ll find long rows of potatoes, kale, mustard greens, tomatoes, cucumbers, green beans, peppers and other familiar vegetables. Strawberries and raspberries thrive there as well.

The site includes a fenced-in area with greenhouses for specialty vegetables. These are sold at the farmers market or to local restaurants, with the proceeds going toward seeds and supplies for the larger, free-garden area. Another big moneymaker is Honey From The Hood, produced by hives started by a local beekeeper.

New ideas meet new needs. One day, garden manager Mitch Yaciw watched as youngsters from Beacon Heights waited for a bus in the hot sun. Soon Unity Gardens built a shelter at the spot and planted raspberry bushes and apple and pear trees nearby so the children could help themselves to snacks.

Stewart and Yaciw emphasize that the gardens are as much about people as food. They love to see their plants grow, but the true joy comes in seeing grandmothers bring along small children. It’s a sign that younger generations will learn about such traditional foods as turnip greens.

Another way Unity Gardens serves: providing a focus for hundreds of volunteers each year. For Stewart, “unity” means diverse groups of people coming together for a common purpose.

Notre Dame has been an outstanding partner for that. Hundreds of students pull weeds, dig dirt or push wheelbarrows for Back the Bend day each spring. During the summers, volunteers show up from the Notre Dame Family Volunteer Camp. Year-round, students from Walsh, Welsh Family and Dunne halls, or from groups ranging from the Rock Climbing Club to environmental justice classes, help out.

“It started with just one or two at a time,” Stewart says of the Notre Dame volunteers. “Now they’re our core.”