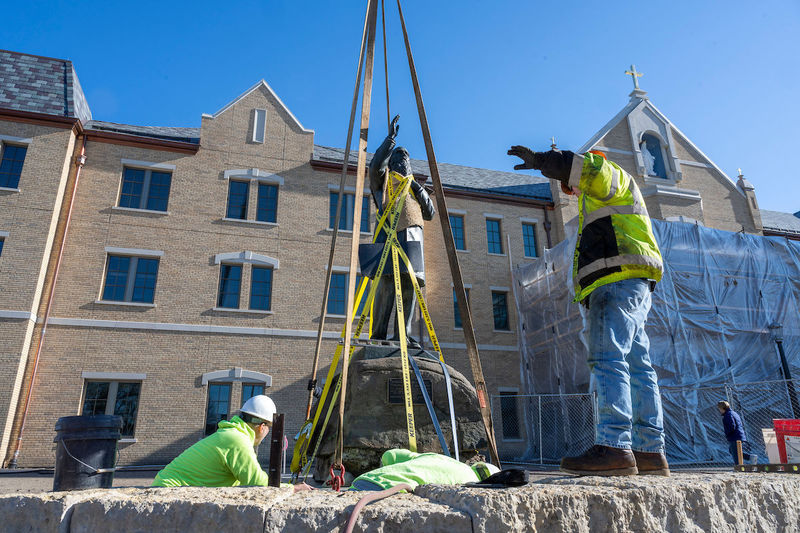 The giant crane lifted the bronze figure about five feet into the air, then gently moved it into place.

And just like that, Father Corby was back home.

The move happened Monday, May 4. The landmark statue of the Rev. William Corby, a Holy Cross priest who served as a military chaplain during the Civil War and twice as Notre Dame president, had been moved to a temporary location a short distance away two years ago to keep it safe during the demolition and replacement of Corby Hall.

The statue, with its right hand eternally raised in the gesture of blessing, weighs about 11,000 pounds. Yellow tie-down straps held the figure upright as the crane slowly eased Corby onto his designated spot.

The 109-year-old statue commemorates the moment on July 2, 1863, during the Civil War when Corby — then chaplain of the 88th New York Regiment, part of the legendary Irish Brigade — gave general absolution to the troops before the Confederate attack on Union soldiers defending Cemetery Ridge on the second day of the Battle of Gettysburg.

“That general absolution was intended for all — in quantum possum — not only for our brigade, but for all, North or South, who were susceptible of it and who were about to appear before their Judge,” Corby later wrote in his memoirs.

The statue originally was placed in front of Corby Hall — then a student residence hall— on May 30, 1911. It’s a replica of a statue that has stood on the Gettysburg battlefield since 1910. Both figures were created by artist Samuel Murray.

The Notre Dame sculpture was temporarily moved in 2018 when Corby Hall (long a residence for Holy Cross priests) was demolished to make way for a new Corby Hall of similar look and design. The building is nearing completion, with the work expected to be done by July 1. So it was time to move Corby back to his traditional spot.

The move required about a dozen construction workers, many wearing facemasks because of the coronavirus pandemic.

Few people were around to witness the moving project because of the COVID-19 campus shutdown. The campus was in full spring beauty, with thousands of tulips blooming and the lilac bushes nearby on Main Quad just starting to blossom.

The figure of Corby stands atop his boulder, just as he did at Gettysburg. The boulder is now affixed to a heavy steel plate as a base. The figure stands just southwest of Corby Hall’s front door. The figure now faces south — it previously faced east — to make the statue more visible to people walking and driving by Corby Hall.

The scene of Corby blessing the troops at Gettysburg is depicted in a large oil painting, “Absolution Under Fire,” painted in 1891 by Notre Dame student and artist Henry Wood, in the permanent collection of the Snite Museum of Art. (The painting is usually on display, but the Snite Museum is currently closed to the public because of the pandemic.)