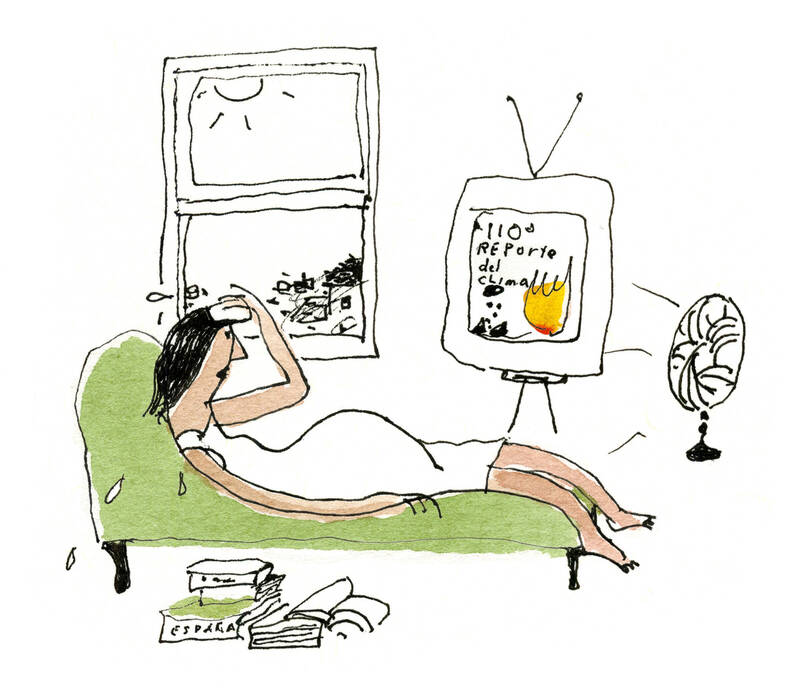 It was the first day of a record-breaking heat wave in Spain when I learned I was pregnant.

My husband Nick and I had just moved to Madrid for seven months so he could do research for his dissertation. When we saw the results of the pregnancy test, we danced around our apartment in excitement and disbelief. We started to dream of the future.

But it was hot — relentlessly hot — in the fifth-floor apartment where we lived without air conditioning, and the heat wave made it impossible not to think about climate change. In the mornings, while Nick drank coffee and I ate saltine crackers to settle my stomach, we watched the local news to practice our Spanish. The meteorologist showed heat maps darkening to previously unthinkable shades of maroon and temperatures inching into the 110s with no relief in sight. Wildfires tore across Spain like never before, and the horizon outside our bedroom window blurred with the distant smoke.

Despite the heat inside the apartment, some days I felt too nauseous to leave the house after Nick left for work at the research institute, so I lay beneath the fan with a wet washcloth across my face, eating frozen grapes, sweating into the couch, feeling useless. I had come to Spain with the same grand goals as a study-abroad student: immerse myself in the language, learn about the culture, make local friends. But now, in pregnancy, my body only wanted sleep, and I couldn’t even drink Rioja wine. In a foreign country, surrounded by the constant soundtrack of a different language, I found my own body becoming a strange place to me with its sore breasts, fatigue and aversion to coffee. I began to absorb another new language besides español: the vocabulary of fetal development, birth plans, breastfeeding.

Not yet aware that I was pregnant, friends and family in the United States began to hear about the heat wave and reach out. Nick and I went for long evening walks to take advantage of the coolest temperatures of the day. Outside, parents fluttered wooden fans over strollers to cool their babies, and I wondered about the world our baby would experience, given the unavoidable forecast of extreme temperatures, rising sea levels and catastrophic weather events. I know people my age who have decided not to have children out of fear for the future of the planet. Pregnancy began to make me feel the heat in a more acute way, and not only because my own body temperature had risen. Would our child ever experience a cooler summer than this one?

Apocalyptic thinking comes naturally during a record-breaking heat wave. And pregnancy brought its own set of anxieties about things to come. I downloaded an app for expectant parents but found the discussion threads turned quickly from excitement over positive tests to intense fears of loss, as if the soaring heights of our happiness only meant the inevitability of a devastating crash. Two themes ran through the posts that I obsessively scrolled from my supine position on the couch: Bad things can happen due to choices I make, and bad things can happen for no reason at all. Users analyzed every intake of food, every symptom or lack of symptoms. By trying to control all outcomes, expectant mothers are caught in a trap. The more we struggle against pregnancy’s inherent uncertainties, the more we are stuck.

The hyperfocus on threats and dangers made me ill, so I turned to literature. I devoured novels with protagonists in the throes of motherhood and contemplated what this transformation would mean for my own life. I craved a vision of my future, even if the images of motherhood from fiction were complicated, raw and sometimes far from rosy. Physically consumed by the oppressive heat and the discomforts of pregnancy, I paused on Ursula K. LeGuin’s description of childcare as “thinking with one’s whole body” and Louise Erdich’s assertion that parents “live and work with a divided consciousness.” My mind tried to wrap itself around the strange divisions happening inside of me.

One place of refuge was the Prado Museum, both for its collection of European art and for its air conditioning. I found unexpected solace in alternative visions of reality like the surreal chaos of Hieronymus Bosch’s The Garden of Earthly Delights, a triptych that juxtaposes the bliss of the Garden of Eden with the terrors of hell. While the painting reveals the fiery consequences of gluttony and hedonism, it also shows humans in control of their own fates. As I stood among the crowd gathered before Bosch’s outrageous panels, my eyes traveled from heaven to earth to hell, and my mind went to climate change. Although the revelers in the earth panel do not know what is coming, Bosch delivers a resolution in the hell panel, with scenes of burning cities and bizarre hellscapes — a strangely satisfying, if twisted, sequence.

But I was most drawn to the countless paintings of the Visitation throughout the collection, especially one by the Italian Renaissance master Raphael. Mary looks down at her pregnant stomach, serene but perhaps unaware, while her cousin Elizabeth gazes at her with a look of intense awe, as if she sees into the future, as if she understands something even Mary does not. Behind them, a scene foretells what is to come: Jesus’s baptism by John in the River Jordan. From the viewer’s perspective, Mary’s experience of the ambiguous present and uncertain future is resolved in the prophetic background scene.

On yet another 106-degree day, Nick and I went to our first doctor’s appointment and heard the heartbeat through the ultrasound and learned the baby was four millimeters long. After the appointment, we went to a café to celebrate with icy sparkling water. We kept staring at each other in disbelief and tried to measure four millimeters in the air between our fingers, marveling at the space we held. We walked through Plaza Mayor, a square humming with life, where refugees sold knockoff Prada bags and sweaty tourists ate overpriced tapas. We sat on a bench and watched a balloon artist make a giraffe for a German family.

That night, we walked along the Manzanares River and followed the distant sounds of life and boom-box music to a park where fountains shot water 20 feet into the air and kids splashed in anticipation of their next release. Families camped out on picnic blankets with sandwiches and 2-liter bottles of Coke, talking and laughing and drying toddlers with towels. For a moment, a cool breeze swept across our corner of the park, and it was like we all had escaped from the fire of Bosch’s inferno. Then the water came again, the children cackled with glee, and the parents splashed themselves in the fountain’s cool relief, like the promise of the Visitation, like a vision of a possible future.

Beth Spesia Muench’s essay won first place in this magazine’s 10th annual Young Alumni Essay Contest — the Schaal Prize, named for former managing editor Carol Schaal ’91M.A. Muench, who majored in the Program of Liberal Studies and in peace studies, lives in Los Angeles with her husband, Nick ’15. They are expecting their first child in March.