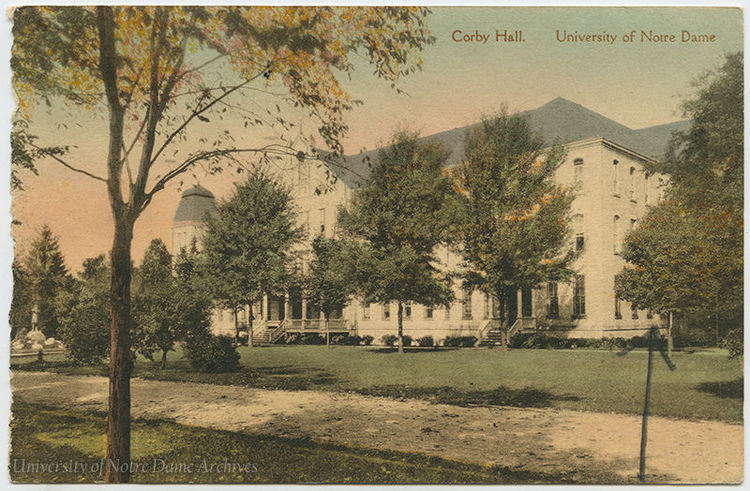 When Notre Dame held the grand celebration of its Golden Jubilee (a bit belatedly) during commencement festivities in June 1895, the campus filled with returning alumni, families of students, and other visitors. Notre Dame had just completed a new community house, a building that would eventually serve as a residence for campus priests, but before the Roman-collared residents moved in, the new building first housed the Golden Jubilee guests.

Four years later, there was a need for a second dormitory with private rooms for the collegiate student. Rather than building new, Notre Dame decided to turn the priests' community house over to students and henceforth call it Corby Hall. The name change came about soon after Fr. William Corby's death, a tribute to the priest renowned as a chaplain with the Irish Brigade during the Civil War and as Notre Dame's third and sixth president.

When Corby turned back into a priests' residence in 1936, the dynamics of the hall changed.  Major renovations modernized the building, which led John Hurley to write in the October 30, 1936, Scholastic:

“So, they went to work on Corby.  Down came the old stairway, trod by the Notre Dame great from Rockne to Lautar. Walls were ripped away by men whose only thought was to get the job done. Hallowed floors were covered with a new, rich-colored composition. Rooms were changed into suites (with every one a bath).

Yes, Corby is no longer the hall of squeaks, worn floors, of names on the wall. It has been made up to date. It has a new wing protruding off toward the grotto. It has been given bright coats of paint. It has been streamlined all the way through.

But, Corby still looks the same from the front ... wondering perhaps why those strange men ever came.”

In many ways, these words relate today to the razing of Corby Hall and the construction of a modern priests' residence in its place. This new streamlined Corby Hall will mark yet another chapter in the building’s storied history.