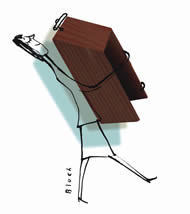 You would think it would be necessary to travel to South Bend to tap into the academic, spiritual and intellectual resources offered by Notre Dame and its faculty. Traditionally, in order to learn from Notre Dame professors, department chairs, college deans and fellows, you have to be in a classroom on ND’s campus, right?

For more than 20 years, the Hesburgh Lecture Series, named for Notre Dame President Emeritus Rev. Theodore M. Hesburgh, CSC, has brought the University’s academic excellence to alumni and their local communities all across the country. The lectures, which are hosted by Notre Dame clubs, perpetuate the example set by Father Hesburgh as a lifelong learner.

Despite its name, the Hesburgh Lecture Series is about more than just “lectures.” The program is designed to inspire intellectual dialogue among alumni, community members and Notre Dame faculty. The series addresses issues that demonstrate the unique strengths of the University, and speakers try to engage audiences in meaningful discussions.

That’s a far cry from the program’s beginning: In its first year of existence, the series consisted of seven lectures delivered by three faculty members. Kathleen Sullivan ’82M.A., ’87Ph.D., senior director of spirituality and service for the Notre Dame Alumni Association, played a large role in launching the lecture series in 1986 and continuing its development to date.

“When we introduced the Hesburgh Lecture Series, the goal was simple. We wanted to make an academic connection by taking Notre Dame beyond the undergrad and graduate classrooms, and delivering it to our alumni through our club network,” Sullivan says.

In her role at the alumni association, Sullivan lined up faculty for lectures and coordinated them with Notre Dame clubs for speaking engagements.

More than 20 years later, she finds herself on the other side of the microphone. Last year Sullivan, who teaches each semester in ND’s First Year of Studies Program, began lecturing on “Servant Leadership: The Intersection of the Beatitudes and the 7 Habits of Highly Effective People.”

“I’m always so impressed with the crowds that show up for these lectures,” Sullivan says. "There are people out there with so many demands on their lives: kids, homework, household responsibilities. And they choose to come to hear a lecture because they have a deep desire to grow and be closer to God. They want to live a life of service.

“When I experience that goodness—that hunger—it inspires me to be more genuine and giving and focused,” she adds. “They look to me as a role model, but I come back touched by countless role models.”

Last year Sullivan gave eight lectures to ND clubs across the country. Now one of the most requested speakers, she continues to thrive on the insights she gains from each group she meets.

“After a lecture, I’ll get about 10 notes from people who tell me they are taking what they learn and bringing it home to their kids and their friends. They’re sharing the Notre Dame message with countless others,” Sullivan says.

In his 15 years as a Hesburgh lecturer, Lawrence Cunningham, the John A. O’Brien professor of theology, has touched many lives as well. He speaks on the topics of church and spirituality, offering three lectures: “Staying Faithful in a Time of Church Crisis”; “Why Be Catholic?”; and “Are Catholics Christians?”

Cunningham, who specializes in the relationship of theology and culture and the history of Catholic spirituality, has written or edited 20 books and serves as a contributor to Commonweal magazine, religious encyclopedias and various scholarly journals. Though his lectures have changed over the years, the topic hasn’t.

“I talk mainly about issues with contemporary Catholicism,” he says. “Often I tweak my lectures based on requests from the clubs I’m visiting, but the topic always focuses on religion.”

Theology in a bar
When Cunningham visited Notre Dame clubs in Orlando and in Boston, the venue itself was somewhat different. On those two occasions, the ND clubs joined with other community groups to host the Hesburgh Lecture (clubs can generate additional community support when they co-sponsor the event with hospitals, universities, human rights groups or religious organizations). In those two cities, the lectures were held in conjunction with Theology on Tap—a continuing education program for young Catholics sponsored by the Church that uses the unconventional method of holding weekly lectures at a local pub.

In Orlando, the lecture was held in a bar on an evening when it was closed to the public. “The bar owner opened it especially for us,” Cunningham says. “In one corner, they had a tiny stage with a stool, the kind you see when you’re watching a stand-up comic—that’s where I gave my lecture. I felt like a comedian, and it turned out to be a terrific theological discussion.”

Likewise, James Langford ’59, director emeritus of the University of Notre Dame Press and assistant professor emeritus, Arts and Letters Core Faculty, has had his share of noteworthy moments as a Hesburgh Lecturer. With “10 years and counting” of participation, Langford says he continues to marvel at the qualities and goodness of spirit that every ND club manifests.

“I gave a talk in Wichita some years ago that told stories of the Notre Dame student volunteers at ‘There Are Children Here,’ a year-round camp for inner-city children,” Langford says. “During the reception afterwards, a gentleman came up, slipped something in my coat pocket and said ‘Your talk helped me decide what to do with the rest of my life.’ He slipped away before I could even reply. Later, I remembered the paper he put in my coat. It was a check for $1,000 made out to the camp. I think back on that as at least a minor miracle.”

Langford brings to the series several decades of Notre Dame experience. He was the director of the University press from 1974-99, a member of the ND Core Course faculty from 1984–2002 and winner of the Kaneb Award for excellence in teaching. His father, Walter, served as chairman of ND’s foreign languages department, coach of the men’s fencing and tennis teams, and director of the ND Peace Corps program in Chile until his retirement in 1973. The senior Langford also taught at the University from 1931-73.

“Notre Dame is in my blood,” Langford says. “It is an honor to take ideas and, hopefully, inspiration to our alumni.”

Covering the topics of contemporary social issues, social concerns and spirituality, Langford offers three lectures through the series: “Let the Children Come to Me”; “Too Many Children Left Behind”; and the popular “Spirit of Notre Dame.”

Each time he lectures, he walks away with the same feeling: “It is amazing to see how they [Notre Dame alumni] embody and act on the ideals this University represents,” he says.