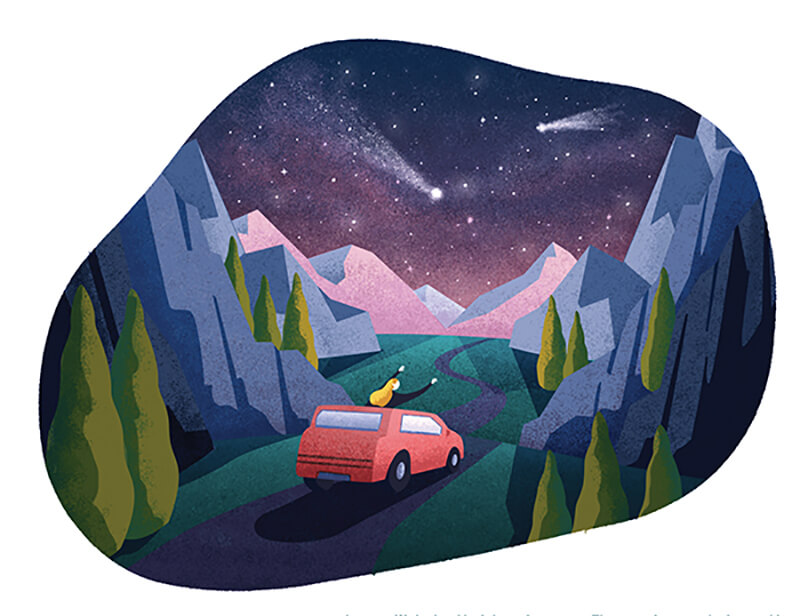 My sister Natalie shut her car door and we waited for my husband to get into the driver’s seat.

“Did you bring the growler?” she asked her boyfriend, Zach.

“Yeah, but let’s wait till we get out there,” he answered after a pause, buckling his seatbelt next to her in the back.

Brad put the rental into reverse and I watched him squint into the rearview mirror. He used the orange haze from a floodlight to navigate around the other cars parked at odd angles behind the Mammoth Hot Springs Hotel. It was early September in Yellowstone and the place was packed — even though this was the off-season, we had reserved the last room in the park.

The four of us bounced in our seats as we maneuvered through the mud, and then our headlights found the road. Our Toyota Sequoia easily cleared the curb, and I could see Brad’s huge grin in the glow of the dashboard lights. “I love this car. Think we could off-road out there?”

Natalie snorted and I rolled my eyes. Brad was hoping Zach would respond, but he didn’t. We passed the museum and tourist shop on our left, picking up speed. I leaned my head into the window to look up.

“I can see some, but we need to get away from these buildings,” I said.

“I don’t see any clouds!” Natalie said, and then we heard Zach’s head bump his window, too.

Earlier that night, walking back to our hotel from dinner, we had decided it was clear enough to count the stars. Someone had told Brad that you could see the Milky Way from Yellowstone, and we had to try. There really wasn’t much man-made light in the tiny outpost where the hot springs were, but to us it was enough to obscure our view. Our plan was to get away from the floodlights and headlights and flashlights and take it in.

Brad hit the brakes hard, slowing to a crawl. “Look!”

In front of us were three bison, shoulder-to-shoulder across the road. One glanced back but didn’t slow the pace of his trot. His breath frosted the air and sent a cloud behind him, a living, fur-covered locomotive. They were massive.

None of us spoke. Brad rolled his window down and I copied, sticking my head out into the cold air. The bison on the right slowed a little, getting in line behind one of his friends. Brad took the opportunity, accelerating to maybe 20 miles an hour to pass them.

All four of our windows were down now, listening to their hooves on the pavement. We got up next to one of the bison, and even in our big SUV his face was level with our windows. They let us run with them for a moment, as four members of a herd: three bison and one mechanical outcast trying to blend in.

It didn’t last. The bison next to us put his head down and leaned into us, one horn getting dangerously close. Brad swerved, almost getting his wish to off-road, but not by choice.

“Oh my God, well, I guess we can’t pass them,” he said, slowing to fall in line behind them. We kept our windows down and zipped our coats up, staying quiet as if eavesdropping on the latest bison gossip.

Ten minutes passed and I realized we hadn’t seen any other cars since we’d met our friends. “Should we keep going?” I whispered.

“There’s a place that should be coming up where we can pull off — I remember from earlier today,” Zach answered, not whispering at all.

“Shhh!” Natalie hushed him. He was right, though, we’d seen a gravel lay-by on our way toward Mammoth Hot Springs.

Brad saw it and pulled off. He made a wide circle and parked the car facing the road. He opened the sunroof, which sounded insanely loud in the silence, and turned off the ignition. I opened and closed my door to get the dashboard lights to go out, and when they did, I wasn’t ready for it.

The darkness sucked my breath away. It was thick and soft, coming at us from all angles. I kept looking out across the road — or at least where I thought the road was — waiting for my eyes to adjust. They didn’t, and instead of feeling scared, I took a deep breath and felt free.

My heartbeat was in rhythm with the crickets, even as they slowed with the falling temperature. The bison hooves kept a beat, continuing down the road, getting softer as they gained distance. Wind gusts rose and fell in time with the symphony, carrying the smell of sweet grass through the car.

“Wow,” Natalie whispered, and I looked up.

Hundreds, maybe thousands of stars decorated a garland of Milky Way. It wasn’t the typical sprinkling of stars, with a few bright ones near the horizon that may or may not be planets. This was a Jackson Pollack of black and white, blue and purple, dark and light, covering the canvas.

“This is unreal,” Zach said, opening the growler he and Natalie had brought. His gulp echoed off the hills around us.

Again, he was right. Natalie and I had grown up hiking and stargazing from our trampoline in the suburbs at night. We had seen deer and wild animals at the state park back home and watched meteor showers. We had trekked through the woods and hugged trees and caught grasshoppers. But there was something different here, something huge and mysterious and magnetic.

I felt a glimmer of recognition somehow, as if I had seen the same stranger on different days across a crowded subway platform.

Brad sighed next to me, eyes glued to the sky. The wind picked up, colder now through our open windows. Two shooting stars slid past. The silence and the dark competed, racing each other to see which one of our senses they could edge out first.

Eventually the dark won. An elk bugle sounded from across the road, making all of us jump and swish our coats. The whistle was beautiful in this context instead of wraithlike, as it had been when we’d heard it earlier in the day.

The feeling in my stomach from the scare jarred a realization. I could name what I had recognized before. This was a familiar scene: human chasing wilderness, human braving the elements to see something new, human feeling small against the backdrop of the universe. I’d read this many times, seen this many times, been this human many times.

This time the scene had moved beyond familiar. Parked off a long road in Yellowstone, I was meeting that stranger from the subway. I was getting a full introduction — a handshake, a warm smile, a shift from acquaintance to friend, and a new understanding. This time, in this scene, I knew I was not the main character. I knew I had never been the main character. The elk wasn’t calling so I could hear it; the shooting stars didn’t flash so I could see them; the bison didn’t run so I could keep up.

None of what I had ever experienced in nature was for me — I had just happened to be there to see it, hear it, feel it. I was an extra, filling space as the magic happened around me. We all are extras, occasionally paying attention and reacting when some spectacular action happens or the cinematography is especially beautiful. We miss the show unless we are invited to be one of the herd, unless we sit in a darkness so heavy we can only see stars.

That night in Yellowstone it was clear that the film is always rolling, the action is always happening and the scene is always stunning. Even when the extras don’t notice.