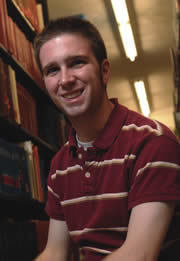 It’s safe to say most people would be daunted by Andy Manion’s academic pursuits. “My senior thesis is on complex geometry and a bunch of stuff that probably shouldn’t be mentioned in the magazine because it’s not easy to explain,” the senior math and music major from Coon Rapids, Minnesota, says. His work and his future promise have already earned him a prestigious Goldwater fellowship to study math in grad school, and he was a Rhodes Scholar candidate.

There is a theme linking Manion’s twin academic passions, math and music. In each case, he says he’s drawn to the beauty of the subject, even if sometimes it’s difficult to convey that aesthetic to the uninitiated.

“Math is a really elegant subject. I can’t put in 20 words why I like it. Why do you like a work of art? You can’t really say, but you know it when you see it.”

Likewise he says it’s difficult to say what he likes about music. Identifying the source of beauty surely is part of the fascination.

Manion, who plays piano, drums, saxophone, oboe, English horn and a “little” bassoon, is intrigued by music theory and history. He enjoys analyzing and dissecting a classical piece with the same precision he employs in mathematics.

To illustrate the point, he goes into a detailed technical comparison of a piano piece by Schubert that alludes to a Beethoven symphony. “The music history and theory classes I’ve taken have allowed me to put a lot of these things in context and understand them more,” he says.

As far as a future career, math will take precedence, Manion says. But music will always remain a passion.