Editor’s Note: Lee Kiefer ’17 had already distinguished herself as the best in the world when this profile appeared four years ago. The legendary fencer added an Olympic gold medal to her long list of accomplishments on Sunday at the Tokyo Games, becoming the first American woman to win a medal in individual foil.

The day Lee Kiefer ’17 committed to fencing at Notre Dame, head coach Gia Kvaratskhelia asked her at least four times if she was certain in her choice. 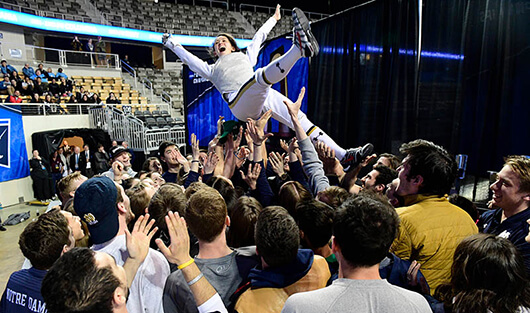 “So that means this fall you’re coming to Notre Dame?”

It’s hard to overstate just how good a fencer Kiefer is. The Versailles, Kentucky, native has excelled at every level of the sport, competing at two Olympic Games, winning four NCAA individual championships in her weapon — foil — and leading the Notre Dame fencing program to its ninth NCAA team championship in March.

She became the No. 1 women’s foil fencer in the world in March — an honor never before held by an American. She clinched a gold medal in April at the Reinhold-Würth Cup in Germany, her first competition since reaching the No. 1 spot.

Kvaratskhelia compared recruiting Kiefer to winning the jackpot, both in athletic ability and her all-around personality as a teammate and student.

“At that level, everyone is a good athlete,” he says. “It’s the intangibles that propel you to even higher levels. What I would attribute it to is that she is the ultimate competitor. I’ve never seen something like that. I’ve never seen her lose because of not focusing 100 percent. She will put 100 percent out of herself every single time.

“Before you get on the strip, you would never notice she’s any different than any of our other athletes,” he continues. “Now, once she starts competing, you know something special is happening, the magic is erupting. But until then, you would never know.”

She’s also a caring person. Kvaratskhelia chuckles as he recalls one of her trips to the NCAA championships in women’s foil. Kiefer faced Mona Shaito, a peer fencer from Ohio State, in the semifinals. At one point, Shaito said “Ouch!” and indicated she had a cut on her finger. Before anyone could react, Kiefer pulled a bandage out of her pocket and handed it to her competitor.

“Here comes the most intense moment, she’s competing to make the finals,” Kvaratskhelia says. “Both camps are screaming and yelling, and here’s Lee with a bandage.”

Kiefer herself is humble about her success. She’s down-to-earth, cheering on her teammates and praising the Notre Dame program. Every now and then, she’s hit by the reality of her staggering success.

“I have moments after I compete, like that I’m done with collegiate fencing, or that I’m No. 1 in the world. How did that happen?” she says. “I’ll have random tears of happiness and sadness at the same time.”

Kiefer comes from a fencing family, with father Stephen a former Duke University team captain, her sister Alex a former NCAA champion at Harvard University and her brother Axel a rising junior on Notre Dame’s men’s team. Lee began fencing with her sister at age 7, with her brother joining the sport a few years later.

Fencing is an exception to the usual college sports experience, Kvaratskhelia says. He can’t think of another sport where collegiate athletes are simultaneously competing on the collegiate, national and international scale. That takes high levels of dedication from his athletes and coaching staff, with three-hour practices Monday through Friday, as well as individual lessons and cross-training.

“Fencing is like a roller coaster ride. You start when you’re very young, and it’s hard — and awkward,” Kiefer says. “But you meet all of these great people, and you have the opportunity to travel the world and the opportunity to end up at someplace like Notre Dame. I don’t know if I would’ve ended up at Notre Dame without fencing. It’s such a loving community here, and it always pushes you.”

The success also requires dedication from the University’s athletic department, which gave the team state-of-the-art facilities in 2012 in the north dome of the Joyce Athletic and Convocation Center.

“It’s hard to compare what we have here,” Kvaratskhelia says. “Very few schools could really brag about their facilities. In the United States you cannot find a better facility.”

Kiefer remembers moving into the new fencing facilities, which used to house the Zamboni machine for the hockey rink before it moved to the Compton Family Ice Arena.

“No one has ever had my locker besides me. It’s my locker,” she says, pointing to the decorations lovingly placed by teammates ahead of big competitions. “Even when I left [for the 2016 Olympics] they saved it there for a year. I’m the only person to have practiced upstairs and downstairs. But I have a lot of people here, my brother and younger friends on the team. I will come visit and cheer them on, but it will be sad when they graduate.”

With graduation in the rearview mirror, Kiefer heads to the University of Kentucky College of Medicine. She’s not putting down the foil, though.

“I am going to try to keep fencing,” she says. “It’s going to be a lot harder to balance, and there are going to be less people to train with.”

If anyone can handle the workload between medical school and professional fencing, Kvaratskhelia says, Kiefer can.

“She’s that special. I’m hoping that Lee will be one of the few who’s done it on a very high level,” he says. “She’s not even gotten close to her full potential. She could be as dominant as anyone at the top of any other sport that we idolize.”

If she’s still succeeding in two years, she might take another year off to train for the 2020 Olympics in Tokyo, potentially putting herself in the elite field of athletes who have competed at three Olympic Games.

“In the past few years, fencing has gotten more publicity than it had,” she says. “But I think it only lasts as long as you are at the top. I was pretty set on retiring after Rio, but I decided to keep going.”

Beyond fencing, though, she wants to be a doctor. Her caring personality will give her a great bedside manner. She thinks she might focus on becoming a surgeon. The irony isn’t lost on her. She’s pretty good at wielding a sharp implement with precision.

“I’ve done this for years, guys,” she jokes.

Amanda Gray is the web content editor at Notre Dame Law School. Previously she worked for the South Bend Tribune, The Goshen News and DestroyTheCyb.org, an online nerd news outlet. Find her on Twitter at TheAmandaGray or email agray3@nd.edu.