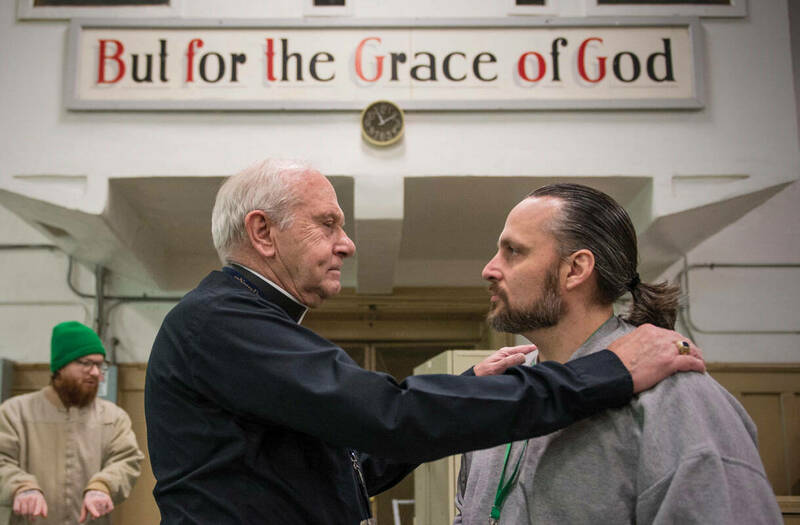 Editor’s Note: After his wife, Barbara, died, David Link ’58, ’61J.D., “needed to be needed.” He started going daily to the prison where Barbara had encouraged him to start volunteering years earlier. Then the longtime Notre Dame Law School dean became a priest. Link died last week at age 85. This Magazine Classic from 2014 chronicles a remarkable life of achievement and service.

The sign of peace during Mass at Saint Dismas Catholic community, where Father David Link ’58, ’61J.D. presides, seems more urgent than the ritual as practiced outside these walls. A man with a shaved head and a teardrop tattoo under his eye gives a fellow parishioner in khaki overalls a hug so fervent you’d think they were soldiers on the verge of battle. The greetings are not hurried, either; the men have plenty of time because they are all incarcerated at the Indiana State Prison in Michigan City. The teardrop tattoo signifies a murder, the crime that landed the majority of prisoners here.

The priest proudly serving the inmates delivers a smile, a hand clasp and a hug with a few words tailored to each. Some receive the 77-year-old’s dry humor, such as a warning that they better say something nice about him or serve another six months. But many need a willing ear and steady encouragement, flocking to the prison’s only sanctuary of peace.

“He just makes you feel welcome, like part of the family,” says David Drummond, an electrician known inside as Sparky. “That’s important here. Being here can just make you crumble. It breaks you down.”

The floor is concrete and peeling paint, with 386 wooden seats bolted to it. The windows let in sooty shadows rather than light. The sign in the back reads: “But for the Grace of God.”

Link is not dismayed. One thing is clear: he truly believes in healing through individual attention to a person’s needs. This faith was born early in his law career, became the cornerstone of the Notre Dame Law School during his 24 years as its dean and motivated his efforts to help found the South Bend Center for the Homeless — and to become a Catholic priest after his wife, Barbara, died in 2003. If we are indeed called to serve the least of our brothers, then this is the story of how Link found them.

“Everything I have done in my life is simple and the same,” he says. “Try to get people in touch with their life’s purpose and then turn them over to the Holy Spirit.”

It was Barbara who suggested the law school dean volunteer at the prison in the first place about 16 years ago, which is why he feels she accompanies him in this vocation. He told her he’d spent his life training lawyers to put people in prison, but then he relented and gave a lecture to 65 lifers without a guard present. What surprised him was not the great need he encountered but that he found the experience meaningful and rewarding.

“When Barbara died, I started going to the prison on a daily basis,” Link says. “I needed to be needed.”

Two decades earlier, he had been president of Notre Dame, Australia. “If you’d have said then that my wife would pass, and I would be a priest and prison chaplain, I’d have said you were crazy,” Link says.

The two people who helped him to this late-life decision were Rev. Dale Melczek, bishop of Gary, and Rev. Theodore Hesburgh, CSC. Bishop Melczek knew Link was volunteering at Indiana State Prison. When Link called to say he was considering becoming a deacon, Melczek said he could do more for the men as a priest. He offered to sponsor Link for an abbreviated seminary experience, in consideration of the four doctoral degrees Link held. But Link, then 68, worried about his age. Father Hesburgh encouraged him to share his years of teaching and legal experience, as well as the added perspective he could bring from his marriage: “Father Ted said, ‘When the Holy Spirit calls, he doesn’t ask how old you are.’”

Hesburgh has been a mentor since Link’s student days at Notre Dame, during which his father died. Link had grown up in Sandusky, Ohio, where his father, who managed a car dealership, taught him the importance of business ethics and customer attention. His mother raised the family’s six kids and demonstrated compassion through charity. Link married his high school sweetheart in 1958 after graduating from Notre Dame, where his success led to a scholarship to the ND Law School and launched his career as an attorney for the Treasury Department in Washington, D.C. He heard speeches by Robert F. Kennedy and Dr. Martin Luther King, and they inspired him to join the Naval Reserves and the civil rights movement.

In 1965, he took a job with a private law firm in Chicago. From the start, Link insisted on reserving Thursdays for pro bono practice — and proved he could still lead the firm in billable hours. Link said his first assignment there taught him a lesson he’s applied ever since. A trucking company owner received an offer to sell, and Link put together an extensive tax plan laying out his options. After an elaborate presentation, an older partner at the firm asked the company owner what he planned to do after the sale. A soul-searching discussion led the owner to realize he didn’t want to sell his life’s work. Link’s lesson: “It’s not about you; it’s about the person you’re helping.”

He decided the law should focus more on healing divisions than sharpening them, and he became a senior partner within a few years without ever bringing a case to trial. He helped his clients resolve disputes and settle out of court. In 1970, a friend’s invitation drew him back to Notre Dame Law School, where he would become dean five years later and remain so for nearly a quarter century. His vision of the law as a healing profession with a duty to unite the rift between two parties helped set the course for the Law School’s enduring focus on ethics.

Dean Link found his next challenge in volunteer work. He was an early devotee of Habitat for Humanity, building homes in town and taking trips around the country and abroad, once with former President Jimmy Carter. Again at Barbara’s suggestion, he became a volunteer at a homeless shelter run out of a temple in downtown South Bend. He often spent nights with a few Notre Dame students in the bare-bones operation that offered only a cot and, in the morning, a doughnut and coffee.

Link’s belief in healing through individual attention led him to envision a better way to serve the homeless. Across the street from the temple sat an abandoned three-story building that was once Gilbert’s men’s clothing store. Link and his friend D’Arcy Chisholm, a shelter volunteer and former real estate agent, put down $7,500 each in earnest money to start negotiations to buy the run-down structure for about $100,000. They had no idea how to pay the rest of the money but forged ahead. Link decided to pitch the idea to new Notre Dame president Rev. Edward “Monk” Malloy, CSC.

“I was sympathetic to the idea because I admired the work they were doing and I had been looking to improve the town-gown relationship,” says Malloy. “The University was key to the finances [about $1 million], but it wouldn’t have happened without Dave and D’arcy’s early involvement or their advocacy.”

With the rehab work a few months from complete in 1988, a fire destroyed a low-budget South Bend motel and left more than 100 people homeless. Giving his own phone number to the media, Link appealed to the community for donations of food and clothing. The city was able to open the shelter 12 hours later with an outpouring of donations that filled 16 busloads. Twenty-five years later, the full-service South Bend Center for the Homeless is a national model that has helped more than 55,000 people break the homelessness cycle and may be the only shelter in the country with its own Montessori school program for clients’ children.

A year later, Link accepted Malloy’s call to open and lead Notre Dame, Australia. He continued as dean, returning to campus after two years and finally retiring in 1999. When Barbara died four years later, volunteer work at the prison helped salve his wounds.

Through this ministry, Link says, “I have changed dramatically. The biggest thing is to realize these people have deep, individual problems. When you say the Our Father with people in prison, they’re often thinking of someone who beat them.”

Link isn’t naïve about his ability to fix people, especially the hardened criminals. But he believes it’s his calling to try to help the ones willing to turn their lives around. He figures if religion can reach one out of 10 prisoners in a state that spends more on incarceration than education, then that’s a lot.

At the Saint Dismas Mass, Link’s homily focuses on change. He tells the inmates that they and God together are the only ones who can turn around their lives. “If you want to survive in this terrible place,” Link says in his sermon, “I don’t care how tough you are, if you want to change, you have to have faith.” He gives the example of a former inmate who was just released from parole and now talks to kids about staying away from drugs.

David Parrish, who plays the guitar at Mass, says Link is “a friend and confidante” he can talk to about anything. “He doesn’t judge you on how you got here but on how you conduct yourself while here,” says Parrish.

Reflecting on why he has chosen to spend a good chunk of his retirement behind 30-foot walls topped with coils of razor wire, Link offers a story. One snowy night years ago at the temple shelter, a drunk and dirty old man came in with feet so frozen the volunteers feared frostbite. Since the man couldn’t stand, Link pulled off his boots and washed his feet with bowls of water, progressing slowly from cold to warm. The next morning, the man had disappeared. Link vividly recalls the conversation with a student about what he considered a spiritual appearance:

“Did you know that old man who came in last night?” she asked.

“Well, he seemed to know you.”

Brendan O’Shaughnessy works in communications for Notre Dame. A former teacher and Indianapolis Star journalist, he is the co-author of two children’s books about Clashmore Mike, the original Notre Dame mascot.