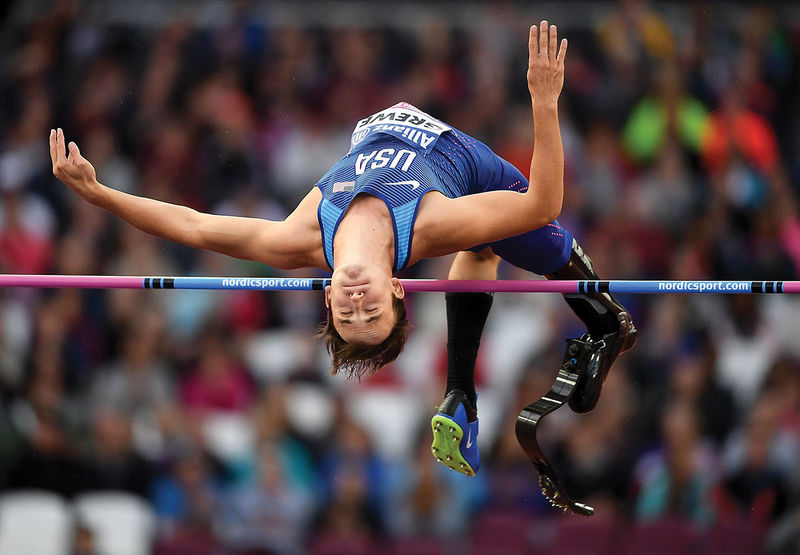 It’s something, losing your leg to cancer as a child, only to become the best para high jumper the world has ever seen. But that’s the story of junior Sam Grewe’s life. He keeps jumping higher.

Grewe has been world champion. Twice. And this summer, at the Parapan American Games in Peru, the 6-foot, 1-inch athlete won a gold medal and set the high-jump world record at 190 centimeters — about 6 feet, 3 inches. Afterward, he felt he could have done better.

On Christmas Eve in 2011, Grewe was diagnosed with osteosarcoma, a type of bone cancer that hits about 400 Americans under age 20 every year. He was 13 years old, and he had a fist-sized tumor in his right knee.

More than anything, he had questions. How did he get this disease? He’d been a perfectly healthy athlete, a star on his middle-school football and basketball teams, a kid from Middlebury, Indiana, living an otherwise normal life — so how could this have happened so unexpectedly? Was he going to live?

Stories and statistics were thrown at him about metastasis and mortality rates, about kids who hadn’t made it. It was easy to assume the worst, and it took a while not to do that. Chemotherapy kept him at the hospital half the time, and the remainder he spent recovering before going back for more. That routine would go on for almost two years.

In the meantime, the damage done to Grewe’s femur forced difficult choices about his rehabilitation goals. He chose a rare procedure that involved amputating his leg above the knee, rather than accept a comparatively frail joint replacement that would have left him unable to play sports.

After the surgery, he had to go through rigorous physical therapy. “To have some therapist come in and tell me to do all these little muscle things was super frustrating and just boring,” he says. “All my friends are out playing sports, going to school, seeing each other, and I was trapped in a hospital bed.”

That doesn’t mean there weren’t good days during that tough two-year span. A fortuitous connection with a Notre Dame football staffer during one of Grewe’s chemo sessions at South Bend’s Memorial Hospital that first summer had brought him to the attention of football coach Brian Kelly. Days before the amputation surgery, the Fighting Irish adopted Grewe as an honorary team member for the 2012 season. They made him feel like one of the guys throughout their undefeated schedule and kept him motivated to get back into sports.

In the end, he says, the choice to lose his lower right leg “was easily the best decision I’ve ever made.”

Grewe didn’t compete in the high jump until he was 16 and joined the track and field team at Middlebury’s Northridge High School. His father had discovered the Great Lakes Adaptive Sports Association near Chicago, and, in an effort to improve in his new discipline, Grewe found a personal trainer in Kyle Mishler, the track and field coach at nearby Goshen College.

Mishler understood Grewe’s mechanics and helped him develop a jumping technique that is almost the same as that of any high jumper — leaping off his left leg rather than his prosthesis.

“A lot of coaches want to kind of take it easy or worry that it’s going to be too much for me, but I think Kyle . . . understands that this isn’t really a setback,” Grewe says. “I don’t think about it; he doesn’t think about it. Instead, we just focus on jumping higher, getting stronger, faster, whatever it takes.”

In 2015, just a few months after starting to work with Mishler, Grewe’s career catapulted, leading to an appearance in Qatar at what is now called the World Para Athletics Championships. He jumped a surprising 181 centimeters — 5 feet, 11 inches, several inches above his personal best — to win the gold medal.

“I guess this is going to start getting serious now,” Mishler recalls thinking after that triumph.

It did. At the 2016 Paralympic Games in Brazil, Grewe won silver. A year later, he successfully defended his world championship. Then came his world-record jump in Peru. He won another world championship this past November with a 186-centimeter jump in Dubai, United Arab Emirates.

Grewe, now a walk-on with the Notre Dame track and field team, will compete in every Irish home meet and several away meets this season. His jumps are not competitive enough to win most college meets, but he does help the team score points.

He doesn’t keep a tally. Points, medals and records are not what drive him.

“I don’t want to set a goal of gold. Rather, I’d set a goal of height, and if I jump my height, I achieve that goal,” he says. “If they jump higher than me, that’s great for them, but if I jump my goal, then I’ll be happy with it.”

His academic goal is to become a doctor, an aspiration he traces to his own medical journey.

“Had I not gotten the experience with the great doctors at [Memorial] or been able to see what a good doctor versus a bad doctor looks like,” he says, “I don’t think it would push me to pursue a career in medicine like I’m doing right now.”

Grewe may have set the bar for how well one can recover from cancer and amputation.

“I’m wrapping up my undergraduate career to go to medical school. I’m a world record-holder, two-time world champion, international traveler,” he says. “And all of that stems from these terrible, terrible two years of childhood cancer. I wouldn’t change a thing. That taught me everything I know now.”

Rasmus Jorgensen is the local government reporter at The Elkhart Truth in Indiana. He covers U.S. politics for the Danish website Kongressen.com and is a former intern at this magazine. Send him West Wing gifs on Twitter @ReadRasmus.