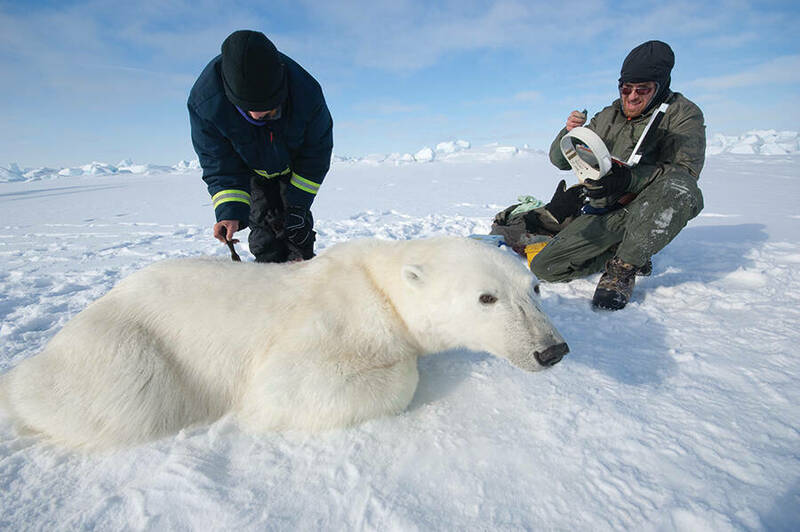 For most people the expression “Some days you eat the bear — other days the bear eats you” is an amusing figure of speech. Geoff York ’90 knows what it’s like to be on the menu.

While working near Kaktovik off Alaska’s north coast 20 years ago, York anesthetized an adult female polar bear with a tranquilizer dart, something he had done many times. As he slipped a tracking collar over her head, he made a mistake — he pinched her neck.

The drowsy bear instinctively lunged for his right thigh. Her incisors pierced his sturdy Arctic coverall and three layers of long johns and sank a quarter-inch into his flesh. He didn’t realize his skin was broken until he undressed at the end of the day and saw his bloodstained thermal underwear.

“If you work with big animals long enough, something’s going to happen,” says York, 53, now the senior director of conservation for Polar Bears International (PBI), the world’s only organization exclusively devoted to the study and protection of polar bears. Before coming to PBI in 2014, York spent 12 years as a field biologist with the U.S. Geological Survey’s Polar Bear Project followed by six years as head of Arctic species conservation at the World Wildlife Federation.

“I was the guy out on the sea ice doing field captures of polar bears in the southern Beaufort Sea north of Alaska. I was the guy with the gun hanging out of the helicopter,” says York. “I was handling bears, measuring bears, taking samples and putting on collars.”

Two years before he was bitten, he had an even more hair-raising experience. His helicopter landed near a den on Pingok Island near Prudhoe Bay. York and another scientist thought the den was abandoned. As they went to inspect it, the mother bear popped out. Astonished, York fell backwards. The bear was 10 feet away and coming at him. “I assumed I was gone at that point,” he recalls. Then the helicopter pilot revved his engine, and the startled bear darted off.

These days York wrangles with an even more challenging species — human beings — and spends more time in his Springfield, Missouri, office than above the Arctic Circle. (Until recently he worked in PBI’s Bozeman, Montana, headquarters, but chose to be closer to his aging parents.)

“When you think about our work, it captures the gamut of challenges of working with large, dangerous animals in remote, hostile environments, and you layer on top of that different groups and interests in very large and politically and economically powerful countries,” he says. These Polar Bear Range States — Canada, Denmark, Norway, Russia and the United States — signed a treaty in 1973 to coordinate efforts to protect the animals whose population had been depleted by hunting.

No one knows how big that population is. The best estimate is between 16,000 and 31,000 polar bears across all Arctic landscapes. Hunting bans have helped the bear population recover, yet they remain a threatened species in the U.S. and have similar protections in Russia, Norway, Greenland — an autonomous territory of Denmark — and Canada, where up to 80 percent of polar bears live.

When asked what part of his job gives him a headache, without hesitation the soft-spoken former English major replies, “Politics at all levels.” Largely, he says, because “there’s always this tendency to demonize others politically.”

In the international arena, PBI faces hurdles that range from delays in getting visas and funding to obstacles in exporting blood samples for analysis to political maneuvers that have bigger impacts. Russia recently canceled plans with Norway to conduct a survey of the Barents Sea that would have used several icebreaking ships. The decision disappointed York and dismayed scientists from both nations. The Norwegians proceeded alone but could only traverse half the planned region, according to York. “In a perfect world, scientists could share samples, data, funds and logistical support freely in pursuit of joint projects,” he says.

American politics presents its own challenges. During the Trump administration, “doors completely closed,” York says. President Obama, as he was leaving office, approved a polar bear recovery plan that the U.S. Fish and Wildlife Service wanted to implement, but “almost nothing happened in the four years after that. Our colleagues are just now picking up the pieces,” he says.

“They had hurdles thrown in front of them to prevent the plan’s implementation, and funding priorities shifted to trying to lease as many acres of land as possible for potential development projects, whether that was mining or oil or gas,” York explains. “Now [the Biden administration] has shifted back to more of what I would call a conservative approach, saying, ‘Let’s look at projects one by one and make sure they make sense, not just for making a quick buck but for the environment.”

The new administration’s decision to suspend oil leases in the Arctic National Wildlife Refuge was a victory for PBI. “We are pleased to be working with an administration that clearly respects the important role science plays in informing sound public policy at all levels,” says York.

Global outreach is a priority. “We know education is a catalyst for change. For a small organization like ours, our outreach with partners like Discovery Education, Explorer.org, and zoos is unbelievable,” he says. The coronavirus pandemic gave PBI the incentive to ramp up its classroom programming. In 2020 its Facebook page and live polar bear cam got 13.4 million visitors and 12.7 million views, respectively.

Much of PBI’s work in the field focuses on the same fundamental question that kept York occupied as a young researcher: How many polar bears are there? Now the question comes with a twist: To what degree does changing climate threaten their survival?

“Large scale and long-term capture-and-recapture efforts remain the gold standard for wildlife population estimates globally,” says York, but many factors conspire to limit such collaring. It’s expensive and complicated to oversee. Changing sea-ice conditions limit the opportunities for doing it safely. The geographical areas involved are vast and the task often requires multinational collaboration that is difficult — and sometimes impossible — to achieve.

PBI also faces pushback from indigenous groups concerned that collaring might injure the bears. So York approached 3M, the maker of Post-its and other adhesives and fasteners. “We got in front of the right people there, and they said ‘We would love to help you with this,’” York says. 3M has since created Velcro-type bear tags that are being tested in zoos and in Hudson Bay.

Another means of tracking and counting bears is den monitoring. For years PBI has relied on forward-looking infrared to detect these warm spots in the snow. But the technology, originally developed by the Pentagon, misses half the dens. Weather can be a problem, and oil and gas companies, which the federal government requires to perform the surveys as part of the permitting process, have failed to do satisfactory work. “What we found was, management was unwilling or unable to wait [for better weather conditions],” says York. “They were impatient.”

Now PBI is working with Brigham Young University and a commercial spin- off, Artemis Inc., to adapt the far more sensitive synthetic-aperture radar, another military technology, to better count dens. York hopes one day PBI will use satellites.

Counting polar bears matters. The Latin name for the species, Ursus maritimus or sea bear, hints at why they have become the poster child for the threat of climate change. They live on sea ice, where they hunt for their preferred food: the calorie-rich blubber of bearded and ringed seals. The bears typically only come ashore, if they do at all, during the summer months, when the ice contracts.

The problem is that the Arctic’s summer sea ice has shrunk dramatically over the past 40 years — by an area more than three times the size of Texas, according to the Environmental Protection Agency. By 2050, a new study by the Arctic Monitoring and Assessment Program predicts, there may be none left at all.

The loss threatens polar bears’ survival, York says. It forces bears to swim farther to find seals or to clamber over what York calls a “constant Stairmaster landscape” of rubble ice. Bears who come ashore resort to less energy-dense food such as grass and snow goose eggs. Some go without eating entirely.

York has seen these effects of climate change firsthand. During his first summer in the Arctic, in 1991, he did fisheries research for the National Oceanographic Service. “We struggled all summer, because sea ice kept coming and going. Drift ice would completely block our way. We were stuck in Camden Bay for 18 days because of ice. Today, “the sea ice would be 400 to 500 miles offshore,” he says. Meanwhile, between 2000 and 2014 the polar bear population along that same coast fell 40 percent, according to the U.S. Geological Survey.

Findings like this have led to apocalyptic warnings about the fate of polar bears. “I’m very reluctant to say that ‘On this date, we’re going to see this,’” York says. “I think it’s best to say that if we don’t change our ways, we’re going to have fewer bears in fewer places, and they’re going to become more vulnerable to both regional extirpation and ultimately extinction.

“I’m an optimistic realist, if that makes sense,” he says. He’s even seen increased agreement about the reality of climate change. “More and more people, regardless of their political persuasion, are saying, ‘Yes, this stuff is happening now.’”

York predicts that parties interested in the bears’ survival will “escape the kind of polarization taking hold in U.S. politics and get back to speaking directly with each other and working together towards solutions. Ideally, it’s going to be a basket of things that people of both conservative and progressive backgrounds bring to the table. It’s not going to be one group that has the right answer. It’s going take a lot of different solutions,” he says. “I see many reasons for hope.”

George Spencer is a writer who lives in Hillsborough, North Carolina.