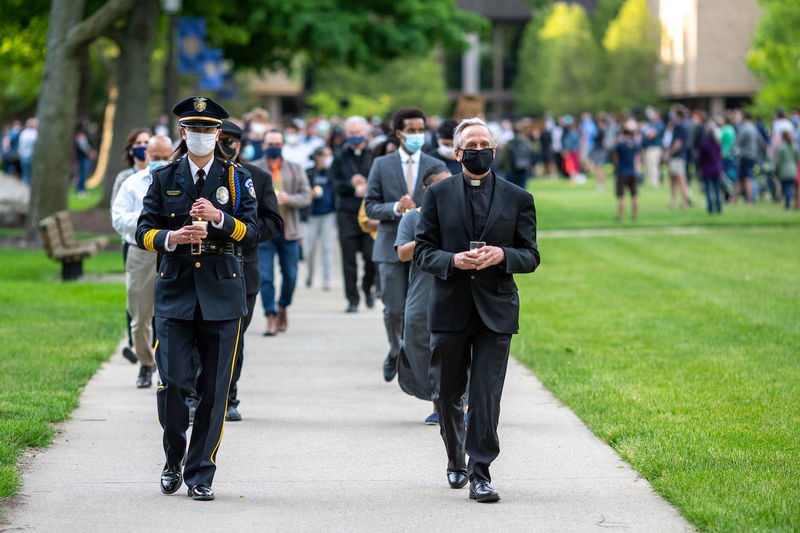 Amid nationwide protests after the death of an African American man in the custody of Minneapolis police, members of the Notre Dame community gathered June 1 to pray and reflect.

George Floyd died May 25 while handcuffed and being held down by a police officer, who placed his knee on Floyd’s neck for more than eight minutes.

“We gather tonight to reflect on the death of George Floyd,” Notre Dame’s president, Rev. John I. Jenkins, CSC, ’76, ’78M.A., told the crowd of students, faculty and staff. “If it were only Mr. Floyd’s death, it would be a great injustice and tragedy. But there are many other deaths to remember,” he said, naming a long list of black Americans who have died unjust deaths at the hands of law enforcement.

Jenkins asked those assembled to reflect “not just on police violence against a single man in Minneapolis, but on a legacy of violence, often conducted with impunity, against black men and women in our nation. We confront the heavy burden of a legacy of racism.”

Many in the crowd wore face masks as a coronavirus precaution and were encouraged to practice social distancing. Afterward, participants carried lighted candles in a silent procession to the Grotto, where they joined in silent prayer.

Jenkins also participated in an interdenominational prayer rally June 7 in downtown South Bend. “We must take steps to establish justice, to do what is right, to assure that everyone, particularly our black sisters and brothers, are respected by the police force and by every one of us every day of our lives,” he told the crowd.