“If you don’t vote, you are invisible. Politicians do not care what non-voters think.” — Nancy L. Thomas, director of Tufts University’s Institute for Democracy & Higher Education

The increasing political divide in America makes it more challenging for those of opposing political views even to discuss potential solutions to the nation’s problems, Thomas said. She spoke November 7 at a forum about civic and political engagement and higher education at the Center for Social Concerns.

For example, she said, surveys show that 76 percent of Democrats think racism is a big problem in American society, but only 37 percent of Republicans feel the same way. There are similar divides on issues such as climate change and gun violence. Those disparities, in and of themselves, should be a concern, Thomas said. “If you don’t even see something as a problem, you’re not going to come to the table to talk about it.”

She believes colleges and universities can play an important role in preparing students to be educated and involved, taking steps like removing barriers to student voting, encouraging open discussion of political issues and involving faculty across disciplines in policy questions. 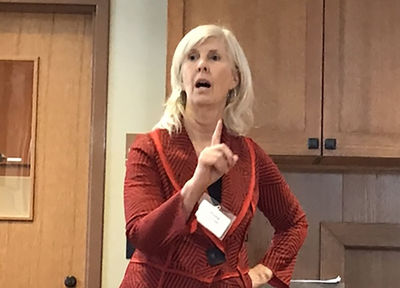 If young adults participate in elections, Thomas said, they can be a powerful force. “I don’t think anyone wants to return the 1960s and occupy (university) presidents’ offices,” she said, “but students do want to be heard.”

The number of Notre Dame students who voted grew nearly 20 percentage points in last year’s midterm elections, according to a new 2014 and 2018 Campus Report from the National Study of Learning, Voting, and Engagement. The report, released November 4 on the eve of Election Day, is based on voting records of more than 10 million students at more than 1,000 colleges and universities in all 50 states and the District of Columbia.

Of those attending Notre Dame, 37.1 percent of students voted in the 2018 midterms, compared with 17.3 percent in the 2014 elections, following a national upward trend.  The percentage of Notre Dame students who voted in 2018 was slightly lower than the national average of 39.1 percent, and below that of comparable private, research-focused universities (42.5 percent).

In recent years, there has been an effort at Notre Dame to increase students’ political engagement and to encourage voting. The initiatives include ND Votes and BridgeND.

Regardless of student turnout, national political attention will be on the University next fall when Notre Dame hosts the first 2020 presidential debate.

There is a perception in some circles that political discussion is anti-intellectual, said audience member Rachel Tomas Morgan, director of Notre Dame’s International Summer Service Learning Program and a newly elected member of the South Bend Common Council. “My own experience with students on our campus and students on other campuses,” she said, “is that the students who are most political are the most intellectual.”