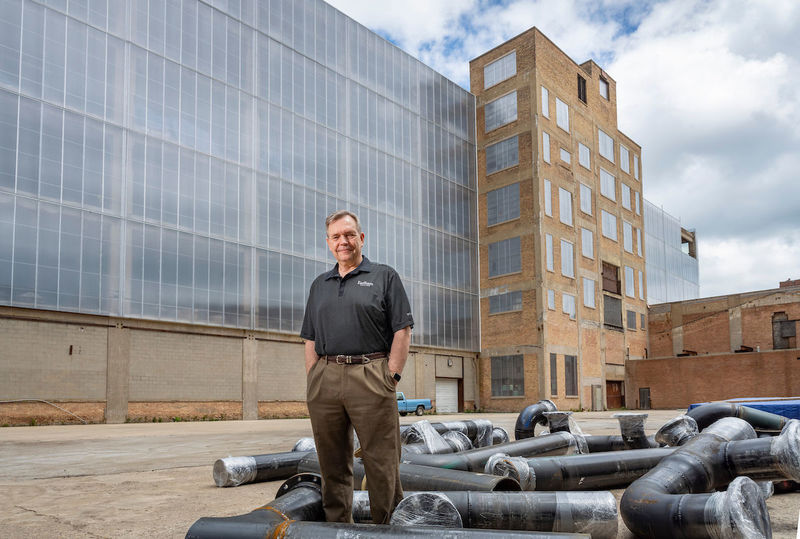 The most daring and symbolic effort to rebuild South Bend’s economy is taking place at the former Studebaker assembly building, a six-story albatross and remnant of the city’s once-dominant employer that for decades was too expensive to tear down. It used to be an eyesore, a Rust Belt reminder of the city’s failure.

But local businessman Kevin Smith ’78 had a vision for what the building could become: a new hope for the community. Eight years ago, the telecommunications entrepreneur proposed that the Studebaker ruins — the assembly building and two smaller structures — could become a transformative space for high-tech companies, just as their namesake had reinvented itself a century earlier through a spirit of innovation that had epitomized South Bend.

Smith’s vision is starting to happen.

“The first impact is that people are proud of Studebaker again,” Smith says. “People were queasy for a while because it failed, but we’re getting confident again. It’s not effusive but I can feel it.”

Of the thousands of makers of horse-drawn vehicles in America at the turn of the 20th century, only Studebaker made a lasting transition to manufacturing automobiles. Just as such innovations drove the country from the agricultural era into the industrial age, Smith sees his goal as wiring South Bend into the digital age — inside the same structures. The old Studebaker buildings — dozens of others have been razed over the years — are becoming the core of the city’s “Renaissance District,” contributing 1.2 million feet of enclosed space for data centers, startup businesses, an innovation center that retrains workers for the new economy and other purposes.

“The exciting part is that organizations are finding this the right platform to help them transform,” Smith says. “The old figuring out the new is what I wanted.

“It isn’t about brick and mortar. It was built for a reason that’s now gone. But the core assets are still there. So how can we reinvent it for a new reason?”

Those core assets, to Smith, have always been affordable space, power and connectivity. Like his nearby Union Station carrier hotel, a cloud-computing facility providing network and server space, the site is adjacent to a train corridor that became the conduit of the fiber-optic information superhighway between Chicago and New York.

When Smith proposed that the city use the millions needed to demolish the assembly building to renovate it instead, he pledged a much larger investment in a now-97-year-old edifice that needed environmental remediation and a major makeover — most glaringly in the two-block-long wall of crumbling brick and broken windows facing South Bend’s minor league baseball stadium. The project cost has grown to about $150 million, and has drawn a mix of local, state and private funding.

Smith’s vision for the largest mixed-use technology campus in the Midwest was called everything from inspiring to unrealistic. Yet South Bend residents couldn’t miss the symbolic rebirth in late 2017 as new glass slowly enveloped the north face of the building and the lights came back on for the first time in more than half a century.

Rather than replace individual windows and frames, Smith devised an innovative and modern look by covering the entire façade in sheaths of glass, some of which are printed with a brick pattern to mimic the building’s historic appearance. The smaller buildings are now nearly full, and about a third of the assembly building is being utilized. Current tenants range from a printed paper cup maker to a biotech firm, while committed future tenants include the South Bend Tribune and the new Purdue Polytechnic High School. It’s even home to the nondenominational South Bend City Church.

“It’s an evolutionary process, something this scale,” Smith says. “For a huge project in a small-to-medium community, you need vision, patience and resilience. My job is to envision the space, but the community will decide what it needs. It could take five or 10 years.”

The progress has not gone unnoticed. Facebook founder Mark Zuckerberg toured the building with Mayor Pete Buttigieg in 2017. Later that year, Los Angeles Mayor Eric Garcetti chose the site for the inaugural meeting of a national group of business, political and nonprofit leaders called Accelerator for America, which provides grants to spur job creation and civic entrepreneurship. And in 2019, Buttigieg employed the building’s symbolism to announce his candidacy for president of the United States.

Smith says he is in a much stronger financial position now than three years ago, mainly because he sold some of his businesses to free up capital, and because he took over project management. He says future plans are more of a sequence than a timeline: Fill the smaller buildings, then turn the former train dock between them and the assembly building into a glass-topped courtyard. Then, line the large building floor by floor with tenants until the space needs its own restaurants and other amenities. He still hopes the top floors become residential.

“The pandemic is forcing changes where we may need to work and live in the same space, but we’re still figuring that out,” he says. “I can see 3,000 people in this ecosystem, maybe 4,000.”

Brendan O’Shaughnessy works in communications for Notre Dame. A former teacher and Indianapolis Star journalist, he is the co-author of three Notre Dame books for children.