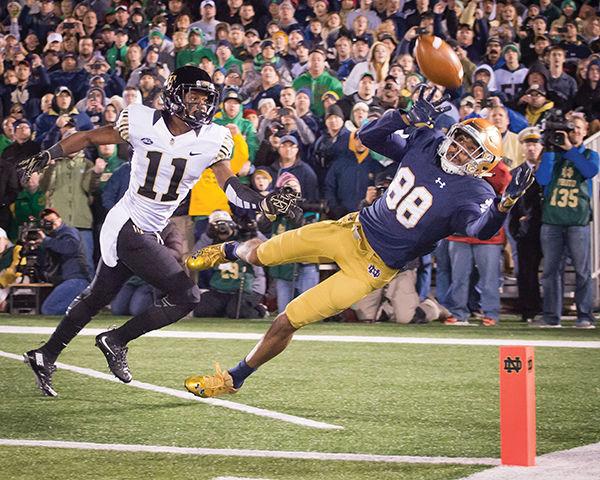 David “The Admiral” Robinson, the Naval Academy graduate and 10-time NBA All-Star, no longer has his family’s highest-ranking title. His son Corey Robinson, a Notre Dame junior Program of Liberal Studies major and football wide receiver, can now answer to “Mr. President.” The younger Robinson and running mate Becca Blais won the February campus election for student body president and vice president. Corey, whose tenure was to begin April 1, became the first Fighting Irish football player ever to hold the position. The job may sound like more than a varsity athlete has time to tackle, but he actually will be scaling back his multifaceted extracurricular activities. Calling himself a “master juggler,” Corey served this year as the Student-Athlete Advisory Council vice president and started the nonprofit One Shirt One Body to donate clothes from college athletes to those in need, in addition to playing football. He already has accumulated enough academic credits to graduate in May, Corey told The Observer, but he added a minor in business economics to maintain the undergraduate status required for the presidency.

Notre Dame’s core curriculum review committee has been holding campus forums to solicit feedback on its draft report issued in November. Every 10 years the University reviews course requirements that apply to all undergraduates to form the basis of a Catholic liberal arts education. The draft report proposes maintaining Notre Dame’s existing requirement of two theology courses. Students also would be required to take two philosophy courses or one philosophy and one “Catholicism and the disciplines” course. Other proposed requirements include six courses in general liberal arts, chosen from a selection of categories including scientific and technical analysis, aesthetic analysis, social sciences inquiry, historical analysis, and advanced language and culture. Two writing courses and the existing, two-semester Moreau First-Year Experience course also would be required. Among its priorities, the committee wanted to respond to expressed student interest in greater flexibility and more cross-disciplinary integration within their requirements so they are not just “checking off boxes of compartmentalized courses,” the draft report says. That report and more information about the committee’s proposals and the campus deliberation are at corecurriculum.nd.edu.

Eagles have landed again at Notre Dame’s Linked Experimental Ecosystem Facility (ND-LEEF) at St. Patrick’s County Park in South Bend — and now you can observe them online. Two bald eagles took over a red-tailed hawk nest at the site last year and have returned to build a new home for the upcoming season. A camera has been installed to offer a live 24-hour view of the eagles, which have been most active between sunrise and noon. Watch them at environmentalchange.nd.edu/programs/nd-leef/eagles.

The full price tag to send a student to Notre Dame in 2016-17 will be $64,043 after a 3.7 percent tuition increase set by the board of trustees at its January 29 meeting. Tuition will rise to $49,685, with average room and board rates of $14,358. The tuition percentage increase is the same as last year’s, which was the lowest in more than 50 years.

Mosquitoes capable of carrying the Zika virus have been discovered in Washington, D.C.’s Capitol Hill neighborhood, a team of Notre Dame researchers reported. Although the population found in the nation’s capital is currently disease-free, the non-native Aedes aegypti species’ presence there reflects a genetic adaptation to a climate well out of its usual tropical and subtropical range. That capacity to adapt means “a real potential exists for active transmission of mosquito-borne tropical diseases in popular places like the National Mall,” says Notre Dame biologist David Severson, lead author of the American Journal of Tropical Medicine and Hygiene paper on the species’ presence in Washington.

Junior Cassidy McDonald will travel to a developing country this summer with New York Times columnist Nick Kristof to contribute reporting that raises awareness of overlooked global issues. It marks the second time in three years that a Notre Dame student has won the annual “Win a Trip with Nick” contest. Nicole Sganga ’15, who now works for CBS News, reported from Myanmar in the summer of 2014. McDonald, a marketing major with a minor in the Gallivan Program in Journalism, Ethics and Democracy, is the managing editor of Scholastic and a former 60 Minutes intern. Of Kristof and her summer opportunity, McDonald said, “He reports on the world’s most marginalized people, but his work doesn’t discourage — it inspires. Small as one person’s efforts may be, I hope I’ll be able to work with the same commitment to reporting in a way that cuts through the noise.”

Pangborn Hall will become a swinging place over the next few years. As two new campus residence halls open in the fall and other halls undergo extensive renovations, Pangborn will be the “swing hall” that houses the temporarily displaced. During the 2016-17 academic year, Walsh Hall residents will live in Pangborn. The following year, Badin Hall residents will move across the quad. And Morrissey will close for renovations in 2018-19. Using a “swing hall” will allow more time for significant renovations than previous projects done during the summer, Erin Hoffman Harding, vice president for student affairs, said in a January letter to students. Current residents of Pangborn and rector Sister Mary Donnelly will move permanently this fall to one of two new residence halls opening on the east side of campus. A new men’s dorm, led by current Carroll Hall rector Father Matt Kuczora, CSC, also will open for the 2016 fall semester.

Greg Crawford, vice president, associate provost and professor of physics, has been named president of Miami University in Oxford, Ohio, effective July 1. Crawford came to Notre Dame in 2008 as dean of the College of Science. Over the past year, he has led the development of the University’s presence in California. Crawford also biked nearly 15,000 miles in annual summer cross-country trips that raised money for research into rare diseases, including Niemann-Pick Type C, which has taken the lives of three of former Notre Dame football coach Ara Parseghian’s grandchildren