Citing a U.S. Supreme Court action dissolving relevant civil marriage restrictions in Indiana and nine other states, the University announced in an emailed memorandum to employees on October 8 that it would extend benefits to all “legally married spouses, including same-sex spouses” of benefits-eligible faculty and staff, effective immediately. The memo affirmed that “Notre Dame is a Catholic university and endorses a Catholic view of marriage.” Supporters of the change said it would broaden access to health coverage and other important services while making lesbian and gay employees feel more welcome. Critics questioned the legal and moral reasoning behind the move. “The heterosexual nature of marriage is an objective truth known by right reason and revelation,” wrote Bishop Kevin C. Rhoades of the Diocese of Fort Wayne-South Bend, who said he was “uncertain” about the implications of Indiana law. “As a Catholic university, it is important that Notre Dame continues to affirm its fidelity to Catholic teaching on the true nature of marriage as a union of one man and one woman.” Some 2,700 spouses of ND employees received benefits prior to the court’s October 6 decision. At press time the number of couples affected by the new policy was not known. . . . 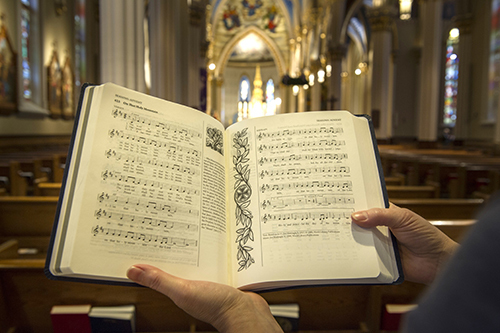 Notre Dame students are all singing from the same hymnal. Literally. Published by Campus Ministry in collaboration with the Institute for Church Life, The Newman Hymnal of the University of Notre Dame, or “Newman Hymnal” for short, debuted in August and now fills the pews in the Basilica and every ND-related chapel from the residence halls to Moreau Seminary to the Dublin, London and Rome centers. Project editor Steve Warner ’80M.A., director of the Notre Dame Folk Choir, says the anthology, which is not for sale, took five years and the labor of dozens of people in a kind of “electronic scriptorium” to produce. Selections include music from familiar hymnals and world traditions that the students actually use in the liturgy plus psalms and sacred songs composed by campus musicians. “Notre Dame, Our Mother” — no. 774 — appears in a hymnal for the first time. Thematic artwork and short, Church-approved reflections complete every page. Warner says he routinely sees people staying after Mass to read the hymnal, named for Blessed John Henry Newman, the 19th century English convert and Catholic cardinal whose name is honored by Newman clubs at hundreds of colleges and universities around the world. . . .

Twins Ryan and Conor Bradley know their family lore, especially the stories about their great-grandfather John J. Buckley, class of 1920, ’22J.D., who taught English while studying for his law degree and claimed to be the original, trumpet-blowing ghost of Washington Hall. More impressive, however, is that the sophomores from Springfield, Pennsylvania, may claim to be fifth-generation Domers. Parents Erin (Buckley) and Gerry Bradley were PLS majors who graduated together in 1986. Erin’s father, Charlie Buckley ’61, was a pre-med student. And great-great-grandfather Charles E. Singler, a South Bend attorney, earned his Notre Dame degree in 1898. That’s not everyone, just the direct succession. Whether the Singler-Buckley-Bradley line is the longest among active legacy families is yet unknown. . . .

Nearly $10 billion. (Or $9.8 billion, to be more exact.) That’s the height to which Notre Dame’s endowment has soared under the guidance of Scott Malpass ’84, ’86MBA. The University’s chief investment officer told Institutional Investor magazine that he credits his consistent success to the hard work of his team, now 38 members strong, many of whom took Malpass’ Applied Investment Management class as undergraduates or MBA students. He also expresses particular delight in how financial aid has grown due to the performance of the University’s investments. The endowment stood at $453 million when Malpass began managing it in 1988, and at $3.5 billion just 10 years ago. . . . 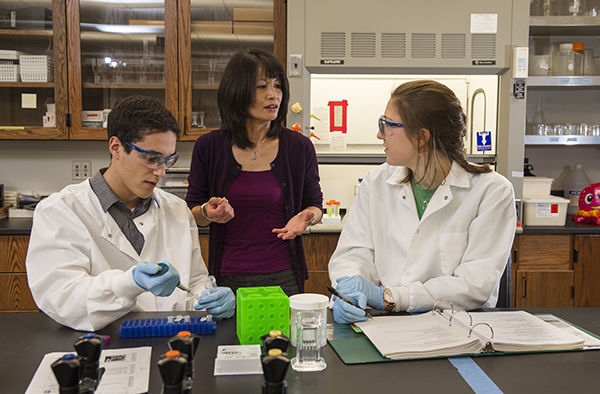 The word “research” appears on Michelle Whaley’s concise Department of Biological Sciences faculty webpage no fewer than 15 times. That’s because Whaley ’93Ph.D. is a research guru who delights in cultivating the requisite skills in everyone from local K-12 students to undergraduate science majors from Notre Dame and other schools. Her focus on helping young scientists sharpen these chops early in their careers helps explain why the genetics and cell biology specialist was named Indiana Professor of the Year in November by the Carnegie Foundation for the Advancement of Teaching and the Council for the Advancement and Support of Education. . . .

“We want love,” he once wrote, “but fear the dependence and commitment it implies; we fear being used and manipulated, smothered and spoiled.” Love’s demands revealed themselves immediately to the Canadian Catholic philosopher Jean Vanier when he invited two developmentally disabled men to live in his house near Paris in 1964. Fifty years later, Vanier’s L’Arche International is a network of nearly 150 homes in three dozen countries. There the severely disabled and their caregivers live in communities of faith, friendship and mutual responsibility through which, Vanier says, the beauty of each person is revealed. L’Arche received the 2014 Notre Dame Award for International Human Development and Solidarity in October at the University’s Global Gateway in Rome. The 86-year-old Vanier sent pre-recorded remarks as he was unable to travel from his home in France. . . .

Driving an “EV,” or electric vehicle, around campus just got easier. The University has installed four tall, slender charging stations for EVs and hybrids that look not unlike old-fashioned gas pumps — two near lamppost 7 in the stadium parking lot and two on the east side of the library lot. Special permits to use the stations cost just $25 annually, but you’ll need a valid University ID. Driving ranges for the best electric vehicles range from 70 to 100 miles between charges, while the snazzy Tesla Model S 85D may go nearly 300. . . . 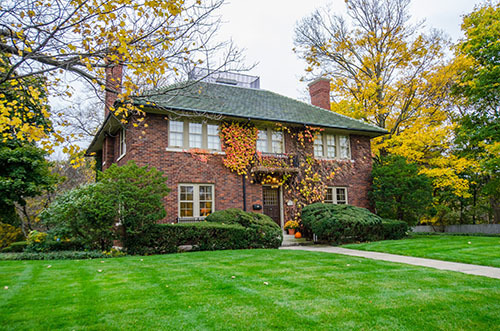 Fans of Fighting Irish football and elegant living missed their chance to buy the home on South Bend’s East Wayne Street where Knute Rockne lived his last days. The Tudor-style house with round-arch doorways, wrought-iron bannisters and intricate stonework went on the market in September for $500,000 and was under contract at press time. But fear not: Days after that sale was announced, Frank Leahy’s former home at 3102 Miami Street, where the coach reportedly lived during the 1940s while winning all four of his national championship titles, went up for sale. The asking price? A mere $425,000. . . .

“[Clerical] celibacy should not be defended primarily as adding functional advantage (flexibility, financial freedom, etc.) to the priesthood, but as adding a dimension of solitude, of holy longing, even of strangeness.” — Rev. William Dailey, CSC, ’94, ’00M.Div, lecturer in law, as one of seven contributors to a “Room for Debate” conversation on The New York Times’ online opinion pages that asked how the Church would change if clerical marriage became more common. Read more online. . . . 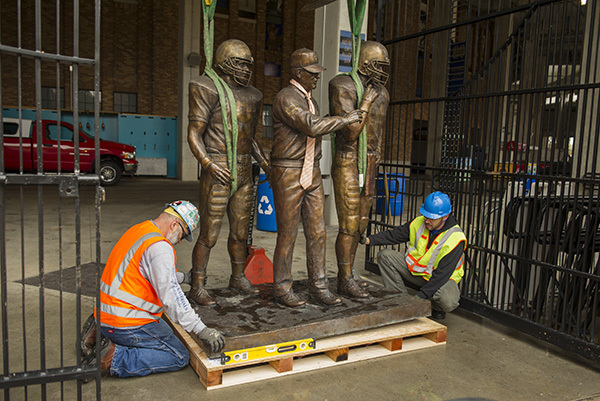 One by one they went inside. Frank and Dan; Ara, Moose and Lou; by crane, by dolly, by careful escort. Knute simply shuffled around by the door.

Once the orange construction fences went up around Notre Dame Stadium in October it was time to relocate those statues, the symbolic first act of the Campus Crossroads project that will see the erection of a new student center, music building and social science hall on the stadium’s west, south and east sides.

In addition to those six bronze icons of Fighting Irish athletics, workers also removed and transplanted 98 trees around campus. Even the Griffon, a gift from the late sculptor David Hayes ’53 that has stood outside the Snite Museum for a quarter-century, had to fly — by flatbed truck. Visitors to campus will recognize it on its new perch in the Notre Dame Sculpture Park.

Work on the Crossroads is expected to be completed in time for the fall semester of 2017.