It is almost always clear when archaeological research projects start. It is that brief and unplanned moment when someone connects in a deeply personal way with the world of the past, of someone else’s world, and sees the need to learn more. In my case, it was in 2006 when I was having lunch on the remote island of Inishark, County Galway, eight miles out into the Atlantic Ocean. Shark never had electricity or much of a port, and when the last 25 people left the Irish island on October 20, 1960, they left behind a village of stone houses, outbuildings and a graveyard where their relatives were buried. 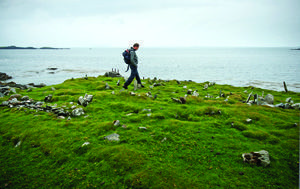 Michael Gibbons has been guiding my archaeological interests in Ireland over several years, and that day we were opening up sandwiches on a remarkably bright day next to an empty village on the island.

Stepping away from the others for a few minutes, I walked through the graveyard eroding out into the sea. As is often the case on rocky coastal islands with limited soil, these individual graves appeared as long mounds with small, rounded stones placed at each end. Looking closely at the stones that must have been dragged up from the beach, I thought, “There are no names. Why are there no names?” Not a single one of the 50 or more stones marking the ends of the graves showed any carving.

As I looked upslope to the empty houses — none with windows and only a few with even partially preserved roofs — and listened to the gentle wind moving the grass around the vacant buildings, I was struck by the soft footprint of the people who once lived there. Shark had been abandoned for only about 50 years, but already the former residents’ lives, memories and histories were disappearing.

Like other Irish islands, Shark was a coastal community from which many people emigrated to America. First mapped in 1816, about 100 people inhabited 11 residences and lived by fishing and farming. In 1848, during the Famine, Shark was home to about 300 people who lived in dry-laid stone buildings. By 1901 this had dropped to 130, and by 1960 only 25 people called the island home. Shark was the starting point for the lives of islanders who eventually adopted America as their homeland. Shark is, therefore, the first half of a story, one in which the practices, language and music of its residents were developed on the sea before the islanders ventured abroad.

Despite the Irish sense of pride and identity connected to island life and the enduring physical buildings on these islands, we have a poor understanding of the lives of those who lived there. For many reasons, our evidence for the rich life of the people from Shark, the very people whose relatives traveled to America and Canada in droves between the 1850s and the 1950s, is now largely limited to oral history, stone houses and beach cobble gravestones at the ends of earthen mounds: the fleeting footprint of an period of the recent past.

It was from this anonymous graveyard, the final resting place of an unknown number of women and men who lived on this exposed island since at least the 1800s, that the Cultural Landscapes of the Irish Coast (CLIC) project emerged. From this simple idea has come a great challenge: How can we shine light on a dark and poorly known island on the western edge of Ireland?

Drawing upon archival research, archaeological fieldwork, historical records and, perhaps most important, oral history, our Notre Dame research team has for six years provided a voice to the islanders now gone. For the past six summers, our field crews have focused on connecting the empty stone houses of the village with the voices of the people who once lived there. Each summer we camp out on the island, bringing all our water, staying in tents, and working in cold rain and burning sunshine — often in the same day.

From a distance, the houses of Shark appear as empty shells, standing as silent reminders of the life that used to be. The houses are now surrounded by green grass and lots of sheep, and it takes time and labor to record the 50 or more standing stone buildings on the island.

But silent stone houses can speak — at least when you bring islanders along who can help you understand what they are saying. To some people, what we record seems simple, for it is the stories of everyday life on an island. But these are powerful and deeply personal stories which speak to the broader patterns of island life that are all but gone and to the historical foundation of Irish-American culture and heritage.

At different points I have been asked by people back in America as well as in pubs in Ireland why we bother to record these old, abandoned and worthless buildings. I tell them that these are not just buildings, for, in combination with the oral history work we are doing, they speak of the disappearing world and memories of our ancestors. This world is but two generations removed, and these empty houses and unmarked graves, all soon to be gone, were home for many islanders who immigrated to North America and whose families live among us today.

Ian Kuijt is a professor in Notre Dame’s Department of Anthropology and the Keough-Naughton Institute for Irish Studies.