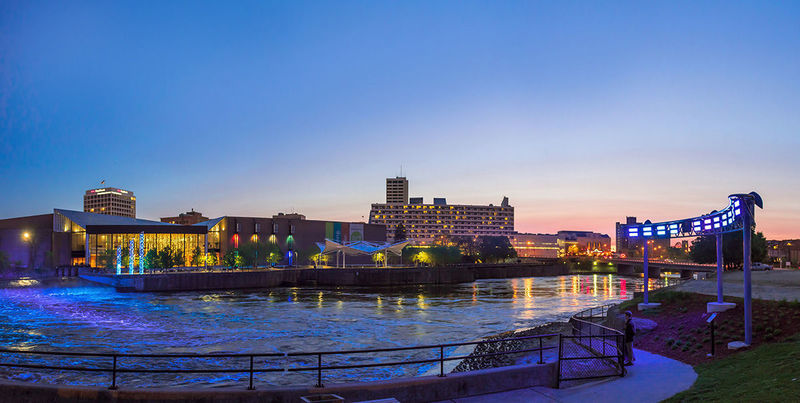 South Bend is one sibling in a family of cities, each with its own character and personality. There is its once-industrial, near-twin Mishawaka, also built along the St. Joseph River, smaller, unassuming, yet a late-bloomer with its robust commercial development spreading malls and chain restaurants over the cornfields east of South Bend’s city limits. Bordering the northeast is sprawling Granger, with no city center but plenty of green, spacious suburbs and excellent schools and newness.

Notre Dame is the golden child of the clan, self-reliant, independent, with an eye on horizons far beyond its hometown, its success bringing it fame and fortune — and arousing the kinds of feelings siblings often have toward the one who gets the attention, the heralded achiever.

There is Roseland, too, and Osceola, as well as Niles, Michigan, and now Elkhart included, all comprising a metropolitan area called Michiana with a population of about 850,000. Sometimes people speak collectively when they say, “South Bend.” Other times, they single out the municipality from its kin. We do both in this issue.

If a city, like a person, has a personality, then South Bend has a complex one, as most people do. Farmers and factory workers, conservatives and progressives, blue bloods and the blue collared have all made South Bend home. It is multicultural and multiethnic, a blend of city and small town, rural and industrial, with homespun Hoosier sensibilities and growing international influences. It is like any average hometown, yet is paired with one of the world’s most electric institutions of higher learning. The city has identity issues.

Once a proud manufacturing center, South Bend has endured the blows of economic hardship that have battered other Rust Belt cities. A half-century has passed since the powerful Studebaker plant ceased production, but South Bend has long defined itself by that abandonment. Studebaker’s departure remained — in 2020 — a significant storyline even in national news reporting on former Mayor Pete Buttigieg’s presidential campaign.

Mishawaka’s newfound prosperity and the flight of the affluent to greener pastures beyond South Bend’s aging and diverse precincts have not helped the city’s wounded self-esteem. The consequences of such shifts have also resulted in budgetary squeezes, a sagging downtown, deteriorating neighborhoods and a struggling school system.

Notre Dame’s history is a world apart. From the outset, the young school enjoyed geographic isolation, then fostered a psychological distancing as the institution sought a more monastic approach to the wider world than could be found in many “college towns.” The separation persisted for decades — tolerable as long as South Bend thrived. But as one ascended and the other went through tough times, relations became strained . . . not unlike those afflicting wary brothers and sisters conjoined in a family situation they resent and resist making better.

The walls began to erode about 30 years ago. To some degree, this was well-intentioned neighborliness on Notre Dame’s part. The University saw needs it could meet, ways to help out. But suspicion and distrust were issues to be overcome. Notre Dame could not play savior, or let its clout affect the family dynamic.

But as sometimes happens when siblings grow up, even stepchildren put away old grievances, jealousies and imbalances. People realize that life gets better when they’re getting along. And as Notre Dame tried to attract world-class faculty, compete for the nation’s finest young minds and recruit top-quality administrators, the University saw the necessity of being embedded in a vibrant, healthy, appealing city. Prudence, goodwill and undeniable self-interest led the University to partner with local leaders in making the city a better place to live and work. They needed each other.

What has transpired in South Bend in recent years has been amazing, energizing, uplifting, surprising, transformative. Mayor Pete’s ascendancy onto the national stage was but one symbolic marker for progress on many fronts — cultural advancements, economic engines, community alliances, booming construction projects, urban renewal, social, educational and artistic developments. The revival has spawned a growing pride of place and a maturity that is moving things rapidly, refreshingly forward. It’s time to put the Studebaker trauma in the attic and polish the legacy now handsomely parked in the local museum.

Challenges remain, of course. Continued viability beyond the coronavirus pandemic for one — a harsh burden on people and places everywhere, but especially on a city just getting airborne on brave, new ventures and entrepreneurial spirit. Equality is another — making sure that advances do not neglect those for whom exclusion is a way of life. South Bend’s quality of life depends upon its embrace of diversity, the solidarity of kin, its humanity.

This issue of the magazine comes at a crucial time in this regional narrative. It’s a celebration of the ingenuity, imagination, cooperation and effort enabling the city — the region — to be taking flight. But it still faces onerous hurdles, including the severe financial fallout of COVID-19. The accomplishments of the past two decades encourage healthy optimism for the future and good reason to proudly call South Bend home.