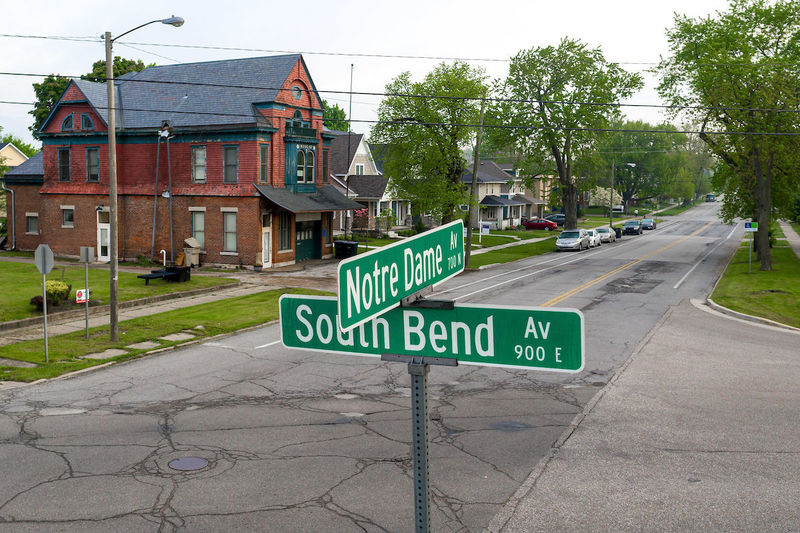 South Bend takes some explaining. Sometimes even to myself.

Like the river, a sense of civic insecurity flows through town, placid on the surface but with a strong undertow. Once in a while, I’ll kick against the current, unwilling to let a slight go by unchallenged, marshaling an inventory of South Bend’s advantages and amenities, but that always feels defensive, protesting too much.

So mostly I float along with the prevailing opinion. If anything pegs me as a South Bend native, it’s that: my silent acceptance of negative perceptions of the city.

Despite my mute acquiescence, I really don’t get why so many people harbor hard feelings. The grievances I hear tend to be vague — beyond pining for a Trader Joe’s, the lack of which seems to be universally felt — an indistinct but pervasive sense of something missing in the culture, the geography, the infrastructure. But what, exactly?

Maybe it’s just the trivial gripes about one’s locale that arise everywhere. I guess I have my share, and South Bend is all I know, but I’m convinced there’s a distinctive quality to this arm’s length relationship with our hometown, a widespread discontent that belies the agreeable — I’d go so far as to say desirable — quality of life here.

Our collective rapport with South Bend has improved over the past few years, but only a little. Conversations about the city still approach near-Eeyore levels of sheepishness. It makes perfect sense to people, for example, that the hypothetical future football coaches who hover around the fringes of every Notre Dame discussion might forgo a multimillion-dollar job leading the sport’s flagship program because it would mean living in the South Bend area. Potential faculty and staff members are understood to be reluctant for the same reason. The permacloud is more than a meteorological phenomenon.

Notre Dame’s presence contributes an immense amount to the community, but also to this local inferiority complex. I’ve spent my life in the overlap, one foot in the insufficient city, the other in the University for which, they say, no explanation will suffice. The disconnect in self-regard and reputation is real.

My dad, Roland Kelly ’50, was a Domer, a true believer who came here from New York for college and stayed forever because he married a townie. She never wanted to live anywhere else, but my mom showed less outward enthusiasm for South Bend than my dad did. My wife and I mirror that dynamic. She’s the community-spirited transplant, an unabashed booster eager to be involved. I’m the lifelong local, the whole reason we live here, but I tag along to her activities only when it would be weird if I didn’t.

If I lean one way or the other along the town-gown boundary, though, it’s toward South Bend, out of allegiance to the underdog — once, but no longer, Notre Dame’s identity. The University now casts a long shadow, for which citizens like me owe much gratitude. A lot of South Bend’s fruits fall from Notre Dame’s trees. That fact also contributes to the lingering, if narrowing, divide in what has always been an awkward relationship.

Important partnerships create symbiotic benefits these days, but South Bend and Notre Dame maintain a contrast worthy of a buddy comedy. South Bend is an ordinary, homely little city, modest in ambition to the point of apathy, not in the least elite. Notre Dame is a place of cultivated grandeur, unabashed in its global aspirations, selective about who’s allowed to walk its halls.

Most Notre Dame students — the chosen for four years in this place few of them choose beyond that — have only a glancing engagement with the city. They “Back the Bend” on service excursions or bend elbows at the bars, their experience revolving around places to serve or be served. New creature comforts and residence requirements give them few reasons to venture off campus even without the curfews and bed-checks of old.

And because professors and other employees, by and large, also come from someplace else, they import a kind of permanent nostalgia for things left behind, fragments of personal yearning that create an emotional mosaic of all that South Bend lacks. Everyone misses something.

Indiana’s state motto is “The Crossroads of America,” a phrase evoking an intersection of people and ideas from all directions. The town of Notre Dame, Indiana, embodies that. But think about what “crossroads” really means: a spot to pause for a moment before deciding which way to go next, a notion that rhymes with South Bend’s sense of itself as a place to pass through. To grow up and move away from; to go to college; to parachute back into for a nostalgic weekend now and then. To outgrow.

What must be well known around here, if seldom expressed within my earshot, is what I’ve come to understand: Climate complaints aside, South Bend is an ideal place to plant and flourish. It helps to have roots like I do, maybe, but from every daydream of greener grass, I’ve awakened to deeper gratitude for my patchy lawn — the literal one and the metaphorical.

I’ve always liked it here, but with each passing year I appreciate what the city offers even more. The everyday equilibrium between easy and busy. The just-enough energy that makes tickets and tables worth hustling to reserve, but still available and affordable. The urban character scaled to humane dimensions.

Before we were married, my wife lived and worked in Chicago. We figured eventually I’d move there, an idea that didn’t last very long. One weekend, she was talking about the drag of the daily commute, the drain of the cost of living. Lightning struck. South Bend could save us — at least time and money. And with the promise of those basics to spare, the road ahead seemed to widen.

It’s revealing, I think, that the idea of South Bend as a place to stay, rather than a rest stop, came upon us as such a sudden cloudburst. The possibility hadn’t been on our radar, then — whoosh! — downpour. A lot of what weighed on us about our future washed away in that instant.

She had the foresight to see clearly what it took me a while longer to bring into focus: Contrary to impressions of South Bend as a place of crimped existence and diminished expectations, the advantages of living here would enrich our daily lives and expand our experience to include otherwise inaccessible opportunities. That’s come true.

We’ve made sacrifices, I imagine, although I do wonder how often people actually hang out in the museums, theaters, bars and restaurants that the bigger and better cities offer. Little-known fact: South Bend has plenty of arts and cultural institutions to regret not supporting enough, too. Factor in the whole region, from The Acorn and Vickers theaters up toward Lake Michigan to the Elkhart Jazz Festival and the great Goshen College performing arts series southeast of town, and you have an extensive list of events to keep reminding yourself you need to take advantage of more.

What’s here was always enough for us, but a critical mass of younger people has pushed South Bend to expect more of itself. They’ve been intent on more than resigning themselves to living here, inspired instead to instill renewed life.

Former mayor Pete Buttigieg has become the embodiment of that project, but the effort preceded his administration and, with any luck, it will long outlast him. Because of the enterprising spirit that persists — and against my innate South Bend defeatism — I resist the inclination to expect the economic engine to stall, Studebaker-style. If anything, at least until the coronavirus threw everything into question, there was still audible revving.

Notre Dame has taken a larger stake in the community than the University has in the past, which bodes well for enduring stability and progress. Still, I wonder whether we’ll see more empty edifices like the College Football Hall of Fame in our future, if haste to cash in on the recent “renaissance” will overreach this market’s grasp.

That’s just me polluting the water. Nice as all the new stuff is, and as much as I hope the momentum continues, South Bend has always been better than its reputation, more than deserving of our respect, even love.

Consider an ordinary Saturday evening: A bike ride along the river trail starting up near Notre Dame, feeling the whitewater spray of the East Race and continuing through downtown, curving around the St. Joe’s south bend into Howard Park, past the Farmers Market and Indiana University South Bend to the Oaken Bucket. The restaurant has a deck overlooking the river, a good vantage with a beer in hand from which to appreciate not South Bend’s renaissance, but its permanence, the sturdy old reliables that predate Eddy Street Commons and the retrofitted industrial buildings.

Frankie’s ribs and Fiddler’s Hearth. South Bend Civic Theatre and Bamber’s Superette. CJ’s burgers. Minor league baseball. Notre Dame’s DPAC and the Morris Civic (as it will always be to me). Bruno’s, Rocco’s, Barnaby’s, Cosimo’s. The carriage Abraham Lincoln rode to Ford’s Theatre the night he was assassinated, among other presidential conveyances, at the Studebaker National Museum. Macri’s bakery. The Griffon Games and Bookstore. Cambodian Thai. La Esperanza. Sunny Italy. The cafés, Chicory and Chocolate. Erasmus and Idle Hours bookshops. Tubing at St. Pat’s park. Music at the Midway Tavern, if you’ll allow me to inch into Mishawaka.

But I protest too much. Better just to sit here sipping my beer and watching the river flow.