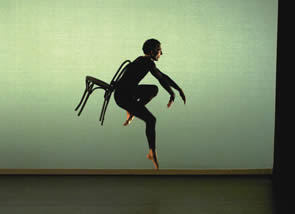 Daniel Madoff stands in a rigid pose on the Decio Mainstage Theatre stage as the spotlight rises. Wrapped in a skin-tight, light blue costume, the young dancer contorts his body in a series of complex phrases that have become synonymous with the Merce Cunningham Dance Company.

The strain of flesh pressing against wood can be heard from the balcony as Madoff stretches his foot across the stage in the opening solo of “Suite for Five,” the same piece Cunningham himself first danced some 55 years earlier at Notre Dame’s Washington Hall.

It’s no coincidence that this piece, originally titled “Suite for Five in Space and Time,” was chosen to open the program performed November 10-12 at Notre Dame’s Marie P. DeBartolo Performing Arts Center (DPAC) in the final weeks of the Merce Cunningham Dance Company’s two-year Legacy Tour. This last swing through the Midwest, like its other celebratory stops in Hong Kong, Paris and New York City, has featured revivals of works long-absent from Cunningham’s vast repertoire as the final generation of dancers chosen and trained by the renowned choreographer says thank you and goodbye before disbanding in 2012.

Cunningham, who died in July 2009 at the age of 90, managed his legacy as meticulously as he choreographed his dances, setting out plans for this tour and the future of his work.

“It was very poignant but also very exciting to be able to let our students be a part of this history and have it come full circle at Notre Dame,” says DPAC executive director Anna M. Thompson, who has presented or commissioned the company on four other occasions.

For the University, the three-night performance capped a semester of immersion in Cunningham’s work and collaborations, which included the exhibition “Warhol’s Camera” at the Snite Museum of Art, featuring the pop artist’s images of Cunningham, as well as symposiums and class lectures in dance, art history, music and poetry.

“There was a lot of teaching on modernism before the company got to town,” Thompson says. “We had [composer] Christian Wolff here talking to music and aesthetics classes. We had Bonnie Brooks [Legacy Plan Fellow of the Cunningham Dance Foundation] talking to poetry and performance classes. That all gave tremendous depth to the experience, because it gave a larger context to the work.”

Cunningham was not only considered one of the most important choreographers of his time, he was one of America’s greatest dancers as well and a leader of the avant-garde movement throughout his 70-year career. Although he started as a ballroom and tap dancer, his professional modern dance career began with a six-year tenure as a soloist in the Martha Graham Dance Company. In 1953 he formed his own company as a forum for his groundbreaking ideas of shape and form.

Cunningham rebelled against the conventions shaping dance narratives at the time, replacing traditional storytelling with non-programmatic movement that exalted dance on its own terms. He choreographed independent of musical scores and predetermined rhythms. Alongside composer and life partner John Cage, his most frequent collaborator, Cunningham would merge choreography and score only at the last minute.

“I think he is the only choreographer really who stuck to the idea of dance and music being separate from each other,” says David Vaughan, the company’s archivist.

“With other kinds of contemporary dance you have the ability to relate to the music,” Thompson elaborates. “If you look at Paul Taylor or Lar Lubovitch, they often use music from contemporary pop culture. You don’t have that with Merce.”

Cunningham choreographed more than 180 dances in his prolific career. During the tour stop at Notre Dame, his company performed “Suite for Five,” “Pond Way” and “Antic Meet,” three of his most notable works. “Antic Meet” — a 1958 dance reconstructed with a co-commission from Notre Dame — features a tongue-in-cheek setting that includes a dancer’s attempt to slip into a sweater with three arm holes and the memorable image of a single male dancer attached to a chair.

It was the opening piece, “Suite for Five,” however, that seemed most poignant for the occasion. One of Cunningham’s more physically demanding works, the dance foregrounds slow solo and duet passages that use tilts, jumps and balances in a dance assembled in six sections.

When Thompson discovered that “Suite for Five” had made its debut at Notre Dame, “I about fell off my chair,” she says.

“You have women dancers in these body suits in 1956 on what at the time was an all-male campus?” she adds, laughing. “Modern dance, avant-garde dance? I’m not thinking that’s going to go over big.”

In fact, Vaughan says, that first audience on May 18, 1956, only consisted of “a couple of priests and maybe six nuns.”

“Performances in those days were few and far between for the company,” Vaughan says. “I think Merce himself used to write letters to various schools and universities looking for engagements. That’s likely what happened here.”

That doesn’t mean that Cunningham’s impact won’t continue to be felt. Thompson says the University’s semester-long immersion has been so well received that it will be used as a model for future DPAC projects. Meanwhile, Cunningham’s plan created a trust that will now oversee the availability and continuation of his work in the years ahead.

Photo of dancer in “Antic Meet.”