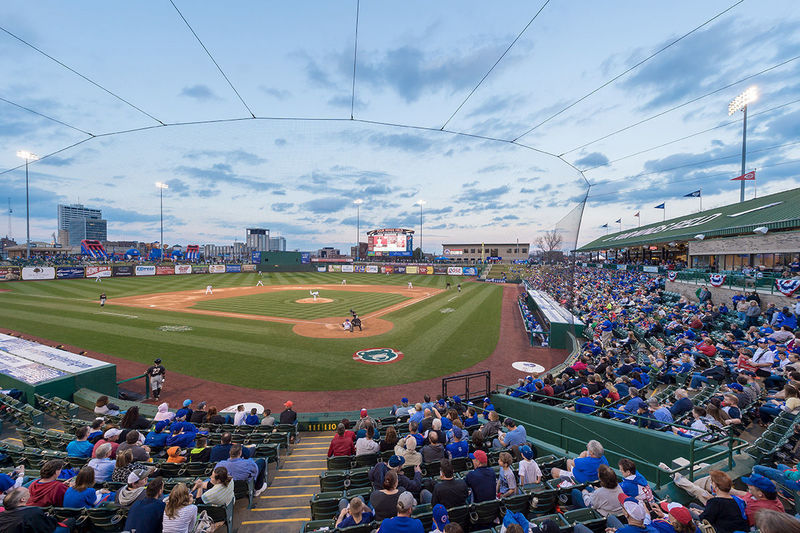 When I pulled into town to start graduate school that August, I dropped my bags, bought groceries at the old Martin’s on Portage Avenue, then hurried down to the ballpark to check out the local minor league baseball team, a habit I’ve had since I was a kid.

I practically had the park to myself. A few hundred diehards dotted the stands, the relaxed chatter giving a newcomer the impression that everyone knew each other. I settled into my seat along the first base line to watch the game, letting baseball soothe my anxiety about the life I was about to begin.

What I remember of that night now, 23 years later, is the $1 hot dogs, a field full of kids working hard to make names for themselves, the long shadows of the former Studebaker complex behind us and the surprisingly pleasant view of downtown South Bend.

“The Cove” was what they then called it, the no-frills ballpark named for an old-time baseball hero, who had retired to his bride’s hometown in 1928. It didn’t offer much in the way of entertainment beyond the intense, earnest, unpolished play common to all Single-A diamonds on a summer’s night. But that view? What appeared to be a well-kept secret during my long-ago first visit has become, for me, the city’s ideal showcase.

Jump to Father’s Day, 2016, and I’m standing in the emerald grass of left field, playing catch with my kids in blazing-bright noonday sunshine, a pinpoint in a Where’s Waldo? scene of several thousand happy people dressed in South Bend Cubs red, white and blue. Baseballs are flying in all directions, miracles of noninjury occurring every few seconds — the exuberance of a city at play, an atmosphere of celebration among families of every imaginable shape, size and background. And as I climb to my seat, several children peeling away with their mother to find the splash pad out by the right field foul pole, I think, It’s not about the baseball.

Not just about the baseball. Not for most folks. Not anymore.

It would be easier to sum up what hasn’t changed at the corner of Taylor and South streets since Chicago-area businessman Andrew Berlin bought the team in 2011 and hit the accelerator on park improvements undertaken by the city, investing millions of dollars of his own money into on-field improvements and the “fan experience.”

“We rank third from last in attendance,” Berlin then told reporters in explaining his promise to keep baseball in South Bend — a vow underscored by his signing of a 20-year stadium lease. “That just kills me when I see that number” — a little more than 100,000 paid fans for the year.

Revamped skybox suites and a “fun zone” of inflatables were just the beginning. Berlin converted the vacant, former synagogue behind the left field wall into a big-leagues-worthy team store and wrapped the structure into the park, forgettable bleachers becoming picnic-table seating and an open-air concourse well-suited to socializing with neighbors over a beer.

That first spring, the Chicago Tribune shadowed Berlin, then the CEO of a packaging company valued at more than $2 billion, as he refilled soap dispensers, swept the stands, shook hands with fans on opening night and shrugged off the dent on his black Cadillac Escalade — a souvenir courtesy of the season’s first foul ball.

Berlin’s good faith reaped instant rewards. Attendance at South Bend Silver Hawks games — the club was then named for a popular Studebaker model of the late 1950s — began a swift and steady ascent, with an arc evocative of the team’s Friday night fireworks that my daughters can watch from their bedroom window on Washington Street. Six straight years of record-breaking figures, and a high-water-mark of 354,000 that Berlin still expects to top. Last year, with the Cubs en route to a Midwest League championship, Four Winds Field at Stanley Coveleski Regional Stadium hosted nearly three times as many fans as it had in 2011.

The biggest leap came after the 2014 season, when the club switched affiliations from the Arizona Diamondbacks to the Chicago Cubs and then announced that it was changing the team’s name as well. “I promised that I’d do everything I could to bring people back to South Bend, and prove that this is a wonderful place to invest in,” Berlin said at the time. “Now one of the best and most-beloved brands in the history of Major League Baseball is making a bold statement about this place, too.”

The following April, Cubs general manager Theo Epstein threw out the season’s first pitch at Four Winds. The W flag began flying all over the city. And the baby Cubs’ new slogan became a local mantra: “The road to the World Series begins in South Bend.”

Eighteen months later, when first baseman Anthony Rizzo’s giant glove flapped shut on the last out of the 2016 World Series — Chicago taking an electrified Game 7 from the Cleveland Indians — that mantra became fulfilled prophecy. Not in hard fact, but in the hearts of the fans who turn out routinely for SB Cubs home games.

While some locals at first had pushed back on Berlin’s choice to swap out “Hawks” for “Cubs,” fearing the fallout of a yet-unproven relationship, by the time of the World Series win the move had long since been vindicated. And the franchise had been careful to keep Swoop the Hawk in the stands, clowning alongside Stu the Cub, and to use Studebaker’s once-proprietary lettering in creating the new team logo.

Today, Michiana kids who grow up playing baseball can work out year-round alongside minor-league hopefuls at the Cubs’ 1st Source Bank Performance Center. It’s a good deal more expensive than the pitching lessons that old Stan Coveleski, who had won three complete games to lead the Indians to a World Series championship of their own in 1920, used to give boys behind his gas station on Western Avenue. But for the baseball romantic, there’s a hint of tradition in there, too.

And if Field of Dreams romance is your thing, you might consider leasing a unit in The Ivy at Berlin Place. One-bedroom apartments rent from about $1,200 per month, and residents get free access to the rooftop bleachers. The three-story buildings form a ceremonial gateway between the center field wall and the heart of downtown, with space Berlin intends to fill with shops and restaurants. Like a little Wrigleyville. “Wrigleyville East,” team president Joe Hart once called it, referring to the neighborhood around the Cubs’ historic ballpark in Chicago.

“When Andrew purchased the ball club, it was our goal to develop and cultivate an experience at Four Winds Field that will bring people back downtown,” Hart told the South Bend Tribune two years ago. “We wanted the ballpark to be a community gathering point that would provide an entertainment experience like no other.”

One midsummer Friday in 2017 I took my kids to a game. No special reason, just time for a night at the park. The Cubs lost, but the postgame fireworks revved up on schedule — always an impressive show for a city of this size. Afterward, fans ran the bases. Rounding third, one by one, we saw a crowd forming just behind home plate. And there was Andrew Berlin, child-like grin on his face, a chunky World Series ring on one hand, letting kids touch it as he crouched like a catcher for pictures.

The moment reminded me of what he’d once told a reporter were his goals in buying the team. Money and fun, he’d answered in a blink. “And number three — I know it’s going to sound cheesy, but we’re in the business of making memories. I love making memories for these little kids.”

John Nagy is managing editor of this magazine and a lifelong Orioles fan who has adopted the Cubs, big and small, in exile.