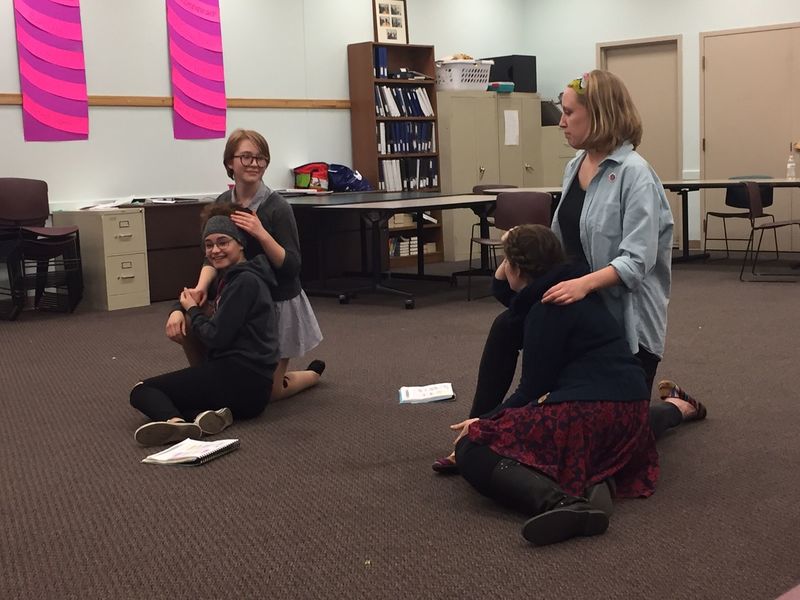 Eavesdrop as the cast of Cymbeline learns the body language of “folding in” and “verbal boxing” to depict poignant and provocative interactions between characters when emotional passion and physical tension arise in the script.

Precious Parker, as Imogen, needs to fold herself into the embrace of her kneeling husband, Posthumus, played by Ophelia Emmons. As Precious makes her first attempt at this maneuver during rehearsal, there’s a stiff, akimbo quality to her movements. Director Christy Burgess tries to show her the way.

Ophelia: She did it so beautifully, it astounded us.

Precious: Teach me to fold in beautifully.

Christy: [Demonstrating] It’s more like, she kneels down and then I kneel down. And then we’re talking, omigod, it’s so sweet. All you do. You don’t, you just … ready? When I say fold, you come here, and you go here. Wait, wait, wait. We’ll do this again. Here. Here. OK. We’re going to do it together. . . .  All right. And! Fold in! [Laughter] So awkward. It was a little better, but I think that what will help you is if have that motivation. Why do you fold in?

Precious: Because he’s leaving me.

Precious: For the last time.

Christy: It’s the last time. It’s that realization, Precious, that you’re going to have to say goodbye and you don’t want to. And so that’s why you fold in so you can be held where you’re like, ‘I’m saying goodbye’ and then . . . .

Christy: Man, you are so overthinking it.

Precious: OK. Why is this hard?

Christy: Because you’re overthinking it.

Precious: I feel like I’m doing a flop down.

Precious: Watch this. What this flop.

Christy: Look, as soon as you get the intention, it’s going to be fine.

FOR HONOR AND THIN MINTS

Ophelia’s Posthumus and Iachimo, played by Kennedi Bridges, find themselves in a standoff over the honor of Imogen, the wife of Posthumus, whom Iachimo claims to have lured into straying from her husband. At this rehearsal, Christy pushes Ophelia and Kennedi to increase the intensity of their encounter.

Christy: I need more. Like, OK: Ophelia, you are very protective of the people you love, right? Yes, you are. And I’ve seen you get like very passionate about that. I think sometimes it’s hard because it’s like, if it were just for you, you’d be like, ‘It’s OK, I can take it,’ but if somebody is hurting somebody that you love, or you see something that’s unjust, man, you would get angry and you would stand up. And I know that your cheeks would flame, but you would still hold your ground, and it would be an amazing argument. I mean, am I wrong?

Kennedi: I’d fight for Girl Scout cookies. No, I’m sorry, no I wouldn’t.

Christy: Oh my god. Which kind? Like, I will get them and I will say the winner of this scene gets them.

Kennedi: Are you for real?

Christy: OK, that’s fine. Let us see, we are fighting over Imogen’s honor and, obviously, a box of Thin Mints. . . . Bring it. This is verbal boxing. And it’s also, like, you guys are obviously beautiful young girls, but I need you step it up physically too. And it’s not, like, pretend to be a man, but there’s that sense of that intention. I know there has been a time in your life where you have had to do this, where you’re like, all right, and you put your shoulders back and you step up. And it’s not aggressive, it’s not like in your face, but it is that, ‘I am present. I’m ready.’