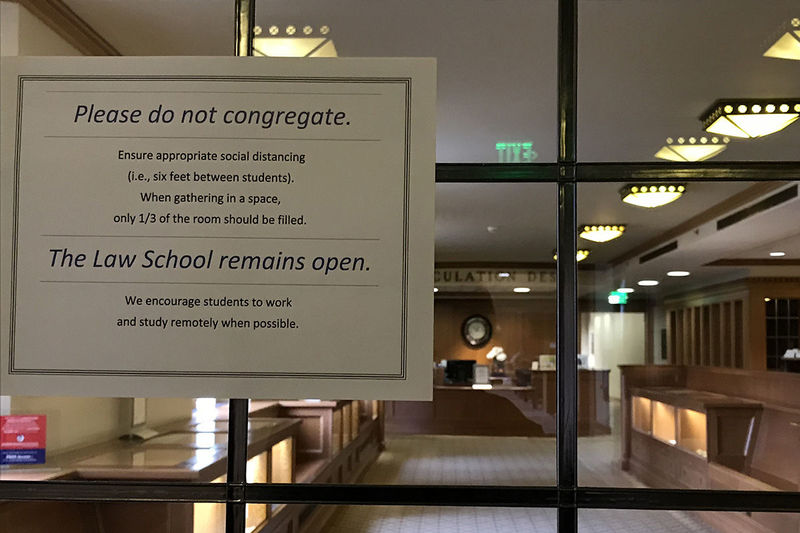 Notre Dame senior Michael Chamberlain carried all his belongings out of O’Neill Hall on Monday and packed them into his car. A California resident, he planned to drive to Houston and live with his brother for the near future.

“The University says we’re coming back in April. I’m not buying it. I was ready to leave, but I wasn’t ready to leave this soon,” he said, noting the final months of senior year are a memorable time for Notre Dame students, but the Class of 2020 will now have to miss many traditional senior events. The unfortunate circumstances facing the graduating class were among the topics University President Rev. John I. Jenkins, C.S.C., ’76, ’78M.A. addressed in a video message to the campus community this week.

With the coronavirus spreading across the United States and around the globe, the University announced on March 11 that all in-person classes will be suspended. Classes resume online March 23 with the virtual instruction to last at least until April 13. (Note: The University announced Wednesday afternoon that classes will continue online until the end of the spring semester.) A small number of undergraduates who were unable to return home have permission to continue living in their residence halls.

Notre Dame students were on spring break when the plan was announced. The break was extended an additional week to give students and faculty time to make the transition to online classes. The University also canceled all study-abroad programs and flew students and U.S.-based faculty and staff back home. Updates on the Notre Dame’s response to the outbreak can be found at coronavirus.nd.edu.

“I personally think it’s all an overreaction,” Chamberlain said of Notre Dame and many other colleges deciding to close and shift classes online. “I don’t know that (coronavirus) is such a big deal as everyone is making it out to be.”

Tuesday marked the quietest St. Patrick’s Day in memory at Notre Dame, on a campus largely vacant. A few people could be seen walking across Main Quad or South Quad, but silence prevailed nearly everywhere. With the need for social distancing in mind, even campus pedestrians tended to avoid each other. In classroom buildings, corridor walls are covered with flyers for campus lectures and arts events that have been canceled.

As of Tuesday, 30 confirmed cases of COVID-19 had been reported in Indiana, including two deaths. No cases have been reported on campus. Indiana Governor Eric Holcomb on Monday ordered all bars and restaurants in the state to close their indoor food service, only allowing carryout orders.

LaFortune Student Center was open Tuesday, but nearly vacant. There were short lines at Starbucks, Subway and the Huddle Mart, but customers were required to order meals to-go and couldn’t eat inside the building. North Dining Hall and Rohr’s Test Kitchen in the Morris Inn continue to serve food, but for carryout only.

Construction crews remained at work on Corby Hall, the new McKenna Hall, a new residence hall and other projects. Campus groundskeeping crews were blowing leaves and spreading mulch. On orders from the administration, many faculty and staff members worked from home.

Duncan Student Center, including the main campus fitness center, is closed and its doors locked. The Snite Museum of Art also is closed. The Hammes Notre Dame Bookstore is open. Hesburgh Library remains open, with reduced hours, but is accessible only to students and employees with campus ID cards. Ryan Churchill, a security monitor at the library, cleaned the library’s exterior door handles with disinfecting wipes. “We try to do it every 15 minutes,” he said.

All public Masses in the Basilica of the Sacred Heart and elsewhere on campus are suspended for the foreseeable future. Catholic bishops across Indiana made the decision Tuesday to permit no public Masses in hopes of halting the spread of the virus. Masses will be livestreamed from the Basilica at 11:30 a.m. ET weekdays. On Sundays, the Mass is available live at 10 a.m. ET on Catholic TV.

All spring athletic training and competitions, including spring football practice and the Blue-Gold Game, are canceled. The Irish Athletics Facility, with its indoor football field where the team typically would be training, is locked and dark.

There has been no such extended disruption to Notre Dame’s campus life in decades. One would have to go back to World War II, when most of the campus was transformed into a U.S. Navy V-7 training facility, to find such a major disturbance to daily routine. The undergraduate population in that era was reduced to a few hundred students, while about 11,925 men completed their officer training at Notre Dame between 1942 and 1946.

Thomas Bourdon, a freshman resident of Keough Hall, was packing his car on Monday. He was preparing to drive home to Memphis, Tennessee. He spent spring break at home and came back to campus to retrieve his clothes, books and other school supplies.

“It’s a mild inconvenience,” he said of the shift to online classes. Bourdon also is a participant in the Navy ROTC program. He said ROTC participants have been told to keep up their workouts on their own while away from campus.

Bourdon questioned whether shutting down campus classes was necessary. Coronavirus “has the same effect as the flu,” he said. “I personally think it’s a bit of a stretch to shut everything down.”

Dr. Anthony Fauci, director of the National Institute of Allergy and Infectious Diseases, said it is critical for young people to understand that they can be a carrier for the virus and spread it without showing symptoms or feeling ill themselves. He made the comments Sunday on CNN’s State of the Union. He has repeatedly said that COVID-19 is more lethal than the average flu.

Kaitlyn Wallace, a second-year Notre Dame law student, had the entire Law School Commons to herself Monday as she did school work on her laptop computer. Wallace, from Kansas City, went home for spring break and returned to South Bend on Saturday.

She’s preparing to shift to online classes, which typically are nearly nonexistent in the law school. “It’s going to be a challenge. We learn so much by cold calling,” she said, referring to the practice in law school of a professor selecting a student in class and asking them to expound on the topic being discussed.  “I don’t know how that’s going to work online.”

She praised Notre Dame’s handling of the health crisis. “Closing down is practical and smart. It shows they’re dedicated to our health and well-being.”

About 20 Notre Dame professors gathered in a room in Bond Hall on Monday. In the session (which also was available online), the professors were the students — being trained on how to make the shift to online teaching. Some faculty members have no experience with teaching remotely.

The University is offering extensive online and in-person training for faculty to learn how to use the remote conferencing service Zoom, keep in touch with students and alter their teaching methods for online instruction.

“It’s a challenge,” said Ghada Bualuan, a teaching professor and director of undergraduate studies for the Program in Arabic and Middle Eastern Studies. She is concerned that students won’t have the level of interaction via Zoom that they are used to in class.

The professors listened and took notes as Kristi Rudenga, director of teaching excellence for Notre Dame Learning, guided them through preparations for online teaching.

“Communicate with your students. Tell them what books and supplies out of their dorm rooms they’ll need,” Rudenga said. Undergraduates away for spring break were encouraged by the University not to return to campus, but instead to go home. The University is offering to have rectors and Office of Residence Life staff retrieve laptops, textbooks and other items from rooms and ship them to the students’ homes.

“In a time like this, you will not recreate your classroom,” Rudenga told the professors. She encouraged them to update their course goals and focus on what they can accomplish with online lectures and interactive online class discussions.

“This is terrifying for me,” said Romana Huk ’87Ph.D., a professor of English who had just returned from London a few days earlier. She doesn’t have experience teaching online and said her classes typically involve extensive classroom discussion. “I honestly don’t know what it’s going to be like.”

Ed Hums ’75, a professor of accountancy, hasn’t taught online before, but said he’s prepared for next week. He’s recorded some short video lectures to share with his students and will focus assignments on core materials. He’s already emailed his students and told them what to expect. He’ll hold regular “virtual” office hours online.

Notre Dame announced that all full-time and part-time regular employees will continue to receive their regular pay and benefits for work hours for which they are normally scheduled. That policy applies even if a worker’s department goes to limited staffing or the employee is not able to work because of University decisions.

Freshman Olivia Derrico, a member of the varsity lacrosse team, was in LaFortune Student Center on Monday, nearly ready for her journey home to Ridgewood, New Jersey. She and her teammates were in Nashville, Tennessee, last week for a match, and returned to campus last Friday. “I’m not too concerned,” Derrico said of the shift to online learning “It’ll be different. Everybody has to be flexible.”

Isaac Kimmel, a graduate student in sociology, was studying Monday in the Hesburgh Library. He’s from Corpus Christi, Texas, but plans to remain in South Bend. He was supposed to take an in-person comprehensive exam this week, but it was postponed because of the coronavirus shutdown. “I have to find ways to prepare for this exam, which I thought would be over, with my other obligations,” he said. “I have to think both longer term and short term.”

Graduate students living in the on-campus Fischer Graduate Residences are permitted to stay, but Kimmel said some have already packed up and traveled elsewhere to take their online classes. “There are fewer candles in the Grotto,” he noted. “I lit a couple.”